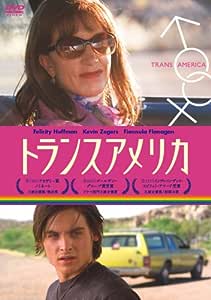 Budge
5つ星のうち5.0 excellant surprise
2020年2月29日に英国でレビュー済み
Amazonで購入
So I whizzed this through in the morning and thought, oh no am not going to like this but with my other keen we popped it on, sat down and got sucked in.
Sure its not a mega movie but its great for what it is, Huffman's performance is top notch, the evolving story well sculptured leading to some really funny moments at times. I don't want you to get any preconceptions about this so I am not going to list what happens but its absolutely worth a watch, an afternoon well giggled and even worth a re watch at a later date.

punisher78
5つ星のうち4.0 Actually a surprisingly good film
2018年11月7日に英国でレビュー済み
Amazonで購入
Got this on the basis of a recommendation and am glad I did. The film is actually very good, but for a key reason....Huffman.

It really is her film and she chews every piece of scenery and acts her heart out with great effect.

A road trip/discovery movie that has the ability to make you laugh and cry.

GratuitousViolets
5つ星のうち5.0 Sincere and Thought Provoking
2011年4月25日に英国でレビュー済み
Amazonで購入
My Thoughts: Transamerica is a surprising, thought provoking and sincere film with the occasional light comedic moment to take the edge away from serious themes of family, responsibility and gender. Felicity Huffman's performance here is outstanding and truly believable as a transexual woman struggling to still come to terms with her path her life has led her to.

Not only is Huffman's performance noteworthy, but her appearance here is completely toned down to a masculine, pale and I must say realistic version of how many transexual women are before the final stages of their reassignment surgeries and hormone therapies, which completely draws you into believing this woman was once a man. The characters boast a tagline of "beauty is relative" here, and this is completely true. While Huffman's character 'Bree' is shown to be somewhat plain almost burgeoning on ugly at times, by the end of the film you feel a connection to a very beautiful person who has struggled with gender dysphoria and identify issues for most of her adult life.

One of the largest themes in the film is family; Bree struggles to behave responsibly as she thinks a mother should, still having struggled with identifying with a mother who disowned her because of her transexualism. Even those who have not struggled with sexual reassignment and identity crises will be able to relate to Bree's struggle for acceptance.

I would definitely recommend this movie to many people (and I would at least urge the people who put-down and find disgust with transexual and transgendered people to give this film a watch as it may open your eyes a little and give you something to think about). The film is moving without being overly corny, realistic but sincere without sugar coating, and leaves you with a broader perspective while still having entertained you.

The Plot: Transexual woman Bree Osbourne is merely a week away from the operation that is to finalize her transition into becoming a woman when she receives a startling phonecall from a teenaged boy called Toby who is looking for and claims to be the son of Stanley Chupak, the man Bree once had been. After consulting her therapist, Bree is prompted to deal with the issue of the son she had never known before she will be legally permitted to undergo her life-altering surgery.

With the threat of her surgery being cancelled and the fear of having to wait yet another year for another chance, Bree takes off to New York to bail out the unknowing Toby who has been arrested for shoplifting. With no easy explanation to her appearance or her identity, she takes on the guise of a Christian missionary to avoid telling Toby she is in fact, his biological father.

Unfortunately for Bree, the easy task of bailing Toby out to appease her therapist turns into a full-time responsibility; Toby is a seventeen year old Hustler who uses drugs frequently and is wishfully hoping to make himself a career in pornography. Bree is dismayed that Toby's mother has died and he has become estranged from his stepfather which has left him alone to fend for himself, renting a bedroom in a rundown apartment building.

With the date of her surgery fast approaching, Bree feels she has little choice but to purchase a second-hand car and take Toby on a roadtrip to try to unload him on his stepfather in an attempt to ensure he is taken care of before she returns for her sexual reassignment. As time goes on, Bree struggles to maintain her secret and hold onto her sanity as a number of obstacles try to defeat her spirit and ruin her plans, all the while unforseen events unexpectedly drawing her closer to the son who is unaware of her true identity.
続きを読む
違反を報告
レビュー を日本語に翻訳する

Gadfly
5つ星のうち5.0 A truly wonderful road-movie
2010年4月16日に英国でレビュー済み
Amazonで購入
I thought this was a wonderful and deeply moving film. Felicity Huffman is absolutely amazing as pre-operative transexual Brie who is united with a son she didn't even know she had. The supportng cast are also excellent, especially Kevin Zeggers who plays her troubled, gay hustler son Toby and Fionnula Flanagan as her over-bearing mother. There is no doubt though that Huffman steals the show with her truly astonishing performance, an acting master-class. By the end of the film I felt deeply involved wtih Brie's emotional journey to such an extent that her transexualism was of secondary importance. Brie is a warm, caring, decent individual and we come to care about her and her journey. The film powerfully illustrates that at the end of the day, it is a person's humanity, their soul that matters the most and whether one is black, white, gay, straight, bisexual or as in Brie's case transgendered, counts (or at least should count) for little. The screen-play is warm and witty, the plot entirely credible, the cinematograhy stunning and the characters both believable and recognisable. It's also accompanied by a great Dolly Parton soundtrack, Travelin' Thru. A wonderful film and a real treat! Unfortunately I must add one slight gripe. As has been expressed by another reviewer, there seems to be a technical fault with the copy run of the disk. The copy I received from Amazon started freezing about two-thirds of the way through. I received a replacement but this was also faulty. I ordered a copy from another supplier but that was also faulty but to a lesser extent. A real shame as it spoils what is an excellent film.
続きを読む
違反を報告
レビュー を日本語に翻訳する

Piste Legend
5つ星のうち5.0 Road movie with a difference
2010年5月27日に英国でレビュー済み
Amazonで購入
A touching and at the same time very funny film about Bree, a male to female transexual who discovers she has a son Toby, the result of a one off sexual encounter yonks ago. Disguised as a Christian missionary she goes to New York to bail him out of prison and together they begin a road journey across home to California. All the while they get to find out more and more about each other including the ultimate truth about how they are related. Along the way they also meet some interesting characters such as Bree's riotously overbearing mother and a very likeable Native American who has a tender crash on Bree.

Great to see a film that deals with several topics often ignored by mainstream Hollywood. If you fancy a light hearted comedy drama with a difference I recommend this underrated classic.
続きを読む
違反を報告
レビュー を日本語に翻訳する
すべてのレビューを参照します
Amazonプライム会員ならお急ぎ便、日時指定便が使い放題
さらに、映画もTV番組も見放題。200万曲が聴き放題 。クラウドに好きなだけ写真も保存可能。
> プライムを無料で試す