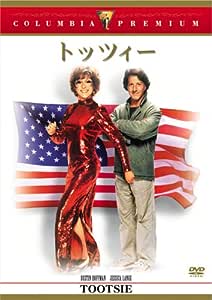 cora
5つ星のうち5.0 Entirely Straight Cross Dressing Story
2019年4月24日に英国でレビュー済み
Amazonで購入
Product reviewed: 2 Disc Edition. The film is a bit of a classic by now, and deservedly so: It's fabulous. Dustin Hoffman delivers an extraordinary performance in the title role of this entirely straight cross dressing story. His character is the difficult and thus unemployable actor Michael Dorsey who hits on the idea of dressing up as a woman in order to audition for a recurring part in a hit hospital soap - the role his girlfriend is turned down for in a rather cavalier way. Of course, being a man inside the dress, he doesn't take it well when the producers treat him as disrespectfully as the other hopefuls and his combative attitude ends up getting him the job. From then on there is much fun, but also plenty of real drama, as he must juggle his private life as a straight man and his job as a mature woman, the actress Doroty Michaels (Tootsie).

Love him or hate him, Dustin Hoffman delivers in this film. In spades. You gotta congratulate him for playing the kind of woman he can credibly be: middle aged, more formidable than attractive, wearing the kind of dowdy clothes it takes to conceal any giveaway features. Jessica Lange is the female lead - the co-star of Hoffman's Tootsie persona in the soap, and the woman he falls for as the man Michael Dorsey. She is pretty enough in that rather dated 80s way and she is solid as ever as actress. The young Bill Murray is fun in a small supporting role as Michael's flatmate Jeff.

The film hits on many issues of gender equality and in that respect it is as relevant today as it was at its release thirty plus years ago. But it is possible to watch it purely for its entertainment value and take everything at face value. There are laughs aplenty. Perfect entertainment for a rainy Sunday afternoon.

The 2 Disc Edition is really rather nice with its generous amount of bonus material on disc two. There is a lot of material about how the idea of the film was conceived and how it was realized. Also a goodly number of scenes that didn't make it into the final cut. For those who are interested, this is what you get for your money:

CathyR
5つ星のうち3.0 Hasn't aged as well as I'd hoped
2020年5月23日に英国でレビュー済み
Amazonで購入
This is another of those movies I'd loved in my youth that I'd hoped my children would enjoy as a 'classic'.
It was fun, but it wasn't as much fun as I'd remembered. Dustin Hoffman is great and makes an uncomfortingly convincing unattractive woman, but I'd forgotten - or maybe didn't realise at the time - how mysogynistic a movie it is. The way that Terri Garr's character Sandy is treated is just awful, and there's an unsettling sense that it isn't just an ironic counterpoint to the way that Michael/Tootsie experiences the dismissive way men regarded women in that era.
The high point of the movie for me was Jessica Lange. She is vulnerable and just exquisite, and you'd need a heart of stone not to fall in love with her.
Did I enjoy watching it again? Yes. Would I watch it again? Not sure. My family certainly wouldn't.
By contrast, Mrs Doubtfire - which explores similar subject matter and was only made a decade later - is still fresh as a daisy, and utterly hilarious.
続きを読む
違反を報告
レビュー を日本語に翻訳する

Spike Owen
5つ星のうち4.0 I'm only glad that I didn't kiss you.
2012年7月31日に英国でレビュー済み
Amazonで購入
Michael Dorsey is an out of work actor, unable to get work because he is either too small, too old, too young and etc. After final getting to the end of his tether he decides to drag up as a woman and audition for the role of Dorothy Michaels on a daytime soap opera. He not only gets the job but Dorothy becomes a massive hit with the television audiences and studio bosses alike, but success has its drawbacks, it plays havoc with his love life and brings unwanted attentions from members of the same sex!

Terrificly entertaining comedy that showcases the best of Dustin Hoffman and brings our attention to a whole ream of quality supporting actors. Feeling very much like an old school type comedy, Tootsie (superbly directed by Sydney Pollack) fuses all the traits needed to hold the audience right to the credits role. What's noticeable now when revisiting the film is just how cheeky the piece is, poking the ribs of soaps, the pedal stool building of celebrities, and of course the bad taste that is left in the mouth because of sexism.....especially in the film industry, yes Tootsie is pretty astute work from Pollack and his team of writers (way too many to mention here).

Though very much a blunderbuss vehicle for Hoffman's range (he may be difficult to work with but he's one of his generations best actors), Tootsie's ultimate success is down to the ensemble cast. The twin sexiness that is Jessica Lange and Teri Garr both put in tremendous work as the two women in Michael/Dorothy's life, then there is Bill Murray as Michael's flat mate, Jeff, deadpan comedy gold from the sozzled face master. Sydney Pollack (yes the same), Charles Durning, Dabney Coleman and Geena Davis round out the roll call for excellent performances fleshing the bones of this delightful picture. Not without its bitter sweet moments, or indeed a touch of drama, it's with the comedy that Tootsie is most remembered for, and rightly so. As Dorothy struggles to fight off amorous men, or the simplest thing like hailing a taxi, the laughs come fast and furious in this cross dressing delight. 8/10
続きを読む
4人のお客様がこれが役に立ったと考えています
違反を報告
レビュー を日本語に翻訳する

A classic film, which is fun to watch and does not feel dated.
続きを読む
2人のお客様がこれが役に立ったと考えています
違反を報告
レビュー を日本語に翻訳する