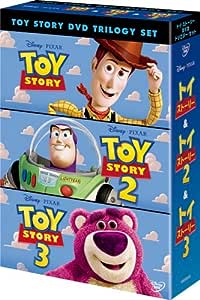 All 3 films are fantastic as we all know, but the picture quality on this Blu-ray collection is mind blowing, so clear and crisp.

And let me tell you this, these films will never ever get old, hard to believe the first one came out nearly 23 years ago, it's gotten better and better with time! I hope future generations have the same thrill and enjoyment as I do when I watch these films.

Mrs S
5つ星のうち5.0 Blu ray box set
2019年1月8日に英国でレビュー済み
Amazonで購入
Just arrived through post so not had a chance to view them on TV but assume picture quality will be great! Was packed in jiffy envelope but still got corners slightly damaged. Toy Story 3 also came with bonus feature DVD that I was not aware of so that was a bonus in true meaning of the word!
続きを読む

Spectrum Is Green
5つ星のうち1.0 Don't try to be clever
2018年12月30日に英国でレビュー済み
Amazonで購入
I ordered The Complete Toy Story Collection where all 3 films were contained in just 1 plastic box. The total cost included £7.11 import fees, fair enough. Instead what I received was a bog standard card sleeve containing each film in separate plastic cases. The specification looks entirely British. I have been hood winked into paying extra for something that anybody could have bought from poor old HMV. Amazon are going to this order straight back!
続きを読む
1人のお客様がこれが役に立ったと考えています
役に立った
違反を報告
レビュー を日本語に翻訳する

J. Fielder
5つ星のうち5.0 Recommended without hesitation.
2018年2月22日に英国でレビュー済み
Amazonで購入
A trio of absolute classics. It’s not often that a trilogy is virtually faultless - especially when you consider the 15yr period between the release of the first and third films.

I loved them when I first saw them and it’s been great to introduce them to my kids who are now equally, if not more, besotted.
続きを読む
1人のお客様がこれが役に立ったと考えています
役に立った
違反を報告
レビュー を日本語に翻訳する
その他の国際レビューを読み込む

AlexKrycek
5つ星のうち5.0 Picture Quality is Phenominal!
2012年4月12日に英国でレビュー済み
Amazonで購入
This is a superb three disc blu ray set. The picture quality is phenominal. I was blown away with the detail albeit I do have a blu ray player and 3d tv. Word of warning - when I put the disc in, it did warn me that the disc will not always play on older blu ray players. Mine is less than 6 months old and even so it took a while to load. If you do have an older player can you update the firmware? Well worth the wait!

I think everyone pretty much knows the "story" so I will not elaborate. Needless to say my 2 yr old daughter loves it. I think part of the attraction is the vibrant colours, they really come out of the screen. Each disc is over an hr and there is lots of bonus material on there. You also get some free Disney points that you can exchange for stickers, bags etc or you can collect more for other higher value gifts.

Overall, I think this is a great purchase for any young child, and without doubt, the quality and depth of the blu ray disc is far superior to the DVD disc set. Highly recommended.
続きを読む
3人のお客様がこれが役に立ったと考えています
役に立った
違反を報告
レビュー を日本語に翻訳する

Jessel
5つ星のうち1.0 Very disappointing!
2018年12月21日にカナダでレビュー済み
形式: DVDAmazonで購入
It says it doesn't work in our region. So, if you're from Canada don't purchase this product it will not work! If the seller knows they are sending it to a region, they know it will not work, they should've informed the buyer not to purchase it.
続きを読む
18人のお客様がこれが役に立ったと考えています
役に立った
違反を報告
レビュー を日本語に翻訳する

April Slocombe
5つ星のうち5.0 A fantastic trilogy of my favourite animated film franchise
2013年10月12日に英国でレビュー済み
形式: DVDAmazonで購入
I've wanted to purchase this trilogy since the third film was released but I didn't purchase this until about two months ago because the price had come down to just over £12.

The first film has impressive animation for 1995 and it was a childhood favourite. The second film is an improvement over the first with new characters such as Jessie, Bullseye and Stinky Pete and it has some hilarious scenes. The third film is my favourite and is the most bittersweet of them all with a mixture of funny, sad and dark moments. I also love 'Day and Night,' the short film that preceded this one in the cinema and it's a lively little extra on the DVD.

All in all this is the best trilogy of Disney DVDs I've ever bought and they were well worth the money. 5/5.
続きを読む
1人のお客様がこれが役に立ったと考えています
役に立った
違反を報告
レビュー を日本語に翻訳する

KitchinCabinet
5つ星のうち2.0 Old fashioned
2019年4月2日に英国でレビュー済み
形式: DVDAmazonで購入
Doesn’t fill the screen of a modern telly and has loads of adverts for other Disney dvds and old cinema releases at the start and you can’t fast forward them. But it is very reasonably priced. I still wish I had paid extra and gone to the virgin media store
続きを読む
役に立った
違反を報告
レビュー を日本語に翻訳する

heidi brown
5つ星のうち3.0 Pricey but good boxset
2019年6月21日に英国でレビュー済み
形式: DVDAmazonで購入
Nice boxset however it showed at £15.99 prime and then changed to charge me £20 with postage, bit pricey but came in good condition and is 3 dvds rather than 3 movies on 1 disc
続きを読む
役に立った
違反を報告
レビュー を日本語に翻訳する
その他の国際レビューを読み込む

FeedMyReads
5つ星のうち5.0 Three great films in a good value box set
2019年8月12日に英国でレビュー済み
Amazonで購入
The Toy Story trilogy offers you the opportunity to own the 3 great films whilst being excellent value for money. For me this is a great box set for the blu-ray/dvd shelf.
続きを読む
役に立った
違反を報告
レビュー を日本語に翻訳する

Sir Richie Rich
5つ星のうち5.0 Reference quality blu-rays!
2013年6月7日に英国でレビュー済み
Amazonで購入
Im sure everyone knows the story by now so I wont go into it.

I just wanted to say, the image and sound quality is top rate. Pin sharp images like it was rendered directly to blu-ray resolution so no film degradation. These discs are definately reference quality movies. Every pixel is perfect. Obviously the 1st movies dog character and some human motion is a little off due to more primitive rendering but gets better with each movie.

Even if you dont like the movie, watch it to be blown away by the picture quality, especially on a properly calibrated tv!
続きを読む
役に立った
違反を報告
レビュー を日本語に翻訳する

Ongo Gablogian
5つ星のうち5.0 Exceptional trilogy
2011年1月11日に英国でレビュー済み
形式: DVDAmazonで購入
I`m 35 and normally watch horror and indie releases. I hadn`t even watched Toy Story 1, or 2, or 3 until a week ago. But now that I have, I can comfortably say that in terms of pure and simple enjoyment, I haven`t enjoyed a series of films this much before...and I`ve watched thousands of films. I would say that the films actually improve (from a very high starting point) over the series, starting with parochial neighbour issues in 1, to the enemy that is Al of the Toy Barn in 2, and culminating in the deeply moving (really!) scene in 3 as the toys look like they are about to "die" - but make it back to say goodbye to Andy, and meet their new owner. Really wonderful film-making.
続きを読む
1人のお客様がこれが役に立ったと考えています
役に立った
違反を報告
レビュー を日本語に翻訳する

Mr. Bojangles
5つ星のうち5.0 A story set that is truly "to infinity and beyond.".
2015年3月5日に英国でレビュー済み
形式: DVDAmazonで購入
Bought as a present for my grandson. As a family group, over a few weeks we have all thoroughly enjoyed each of the episodes. Easy to see why they have become so popular. good story lines, great characters and plenty of action to hold a child's attention including those, who are in their second childhood. TS 3 is a bit dark but proves that although friends may not always agree, they are there for each other when the chips are down... lessons to be learned for all.
続きを読む
1人のお客様がこれが役に立ったと考えています
役に立った
違反を報告
レビュー を日本語に翻訳する

TEC
5つ星のうち5.0 Three films in three cases
2015年2月13日に英国でレビュー済み
Amazonで購入
So much fun in this box set. Our 2.5 year old son enjoys these films over and over again and loves the different characters. Worth noting that I hunted around for a box set as I thought all three would be in one case and take up less room on the shelf. If I'd have looked at all the photos, I would have seen that they aren't; they each have their own case, so I could have bought them all separately which would have worked out cheaper.
続きを読む
役に立った
違反を報告
レビュー を日本語に翻訳する