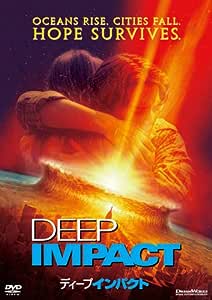 FeedMyReads
5つ星のうち5.0 Deep Impact gets to the heart of the disaster that looms
2017年7月14日に英国でレビュー済み
Amazonで購入
Deep Impact is a great film which came out at the same time as Armageddon. The two films offer up the same idea but with a completely different feel...Deep Impact very much focuses on the human aspect as we see the goings on of the people on Earth as disaster looms and for many people this makes this film feel very slow but for me this is the heart of this film and makes it stand out as a strong film.

Amazon Customer
5つ星のうち4.0 Thinking mans Armaggedon
2013年4月5日に英国でレビュー済み
Amazonで購入
If you're after high octane smash bang action then look elsewhere. If you're after a movie that at least attempts to base itself a little more in a possible reality then this is the movie for you.

This movie isn't without its plot flaws or technical errors and some of the acting could be better. There is a mix of strong believable actors (Morgan Freeman, Robert Duval, Vanessa Redgrave, James Cromwell) and less convincing ones (Elijah Wood, Tea Leoni, Maximilian Schell, Leelee Sobieski)

Sadly the emotional component of the film and the part for me that it is supposed to create the greated sense of fear, resignation and connection with the characters focuses on the actors that to me were less convincing.

Tea Leoni is convincing as Jenny Learner, the upcoming reporter who stumbles across E.L.E and is thrust into the limelight much to the chagrin of her boss Beth (Laura Innes) but as a feeling human wrestling with the personal consequences and possibilities of the impending disaster I just couldn't connect with her. Likewise the start contrast between her Mum Robin (Vanessa Redgrave) and father Jason (Maximilian Schell) was palpable. Vanessa shows her classic acting talent conveying a mixture of emotions allowing me to believe she was real woman torn apart by Jason's remarriage and the impending doom. Yet Schell to me was stilted and devoid of emotion, however I will admit I'm not a fan of his.
In a similar way the other emotional theme of the film centering around Leo and Sarah fails to me due to their acting skills.
I feel that Elijah succeeds a little more due to that he seems to have a natural face that looks permanently worried when not smiling. However Leelee has a spectacular fail to convey the deep distress she is feeling as her parents save her by sending her off with her baby brother/sister with Leo to avoid the onrushing tsunami.

This is in complete opposition to the deep personal trauma that is etched across Morgan Freemans face as the president addressing the nation when the last attempts to avert cataclysm fail and how the amazing James Cromwell as former secretary of state Alan Rittenhouse conveys a deep sense of hopelessness and resignation in his brief but powerful interview with Jenny Lerner.

It may seem by now that I've torn the film apart but somehow as a whole the movie works well especially the tear jearking end where the brave crew of the Messiah bid fairwell to their loved ones as they make the ultimate sacrifice to save them and the planet.

Thankfully to me there is not so much of the chest puffing adoration seeking US patriotism as they selflessly wade in to save the world once more. Yes the USA is instrumental in the effort to save the world, but there is non of the cringe worthy dialogue and unnecessary shots of the rest of the world gratefully celebrating the USA's benevolence.
Instead there are shots of the US bearing its share of the devastation and recognition of how the rest of the planet has suffered in the heartwarming motivational speach by the President (Freeman).
And this is key difference between Deep Impact and Armageddon, this film has attempted to base itself in humility not chest beating bravado and to me that is where it beats its blockbuster brother hands down.

The transfer for the bluray is good but not one of the best of seen for a film of this age with some noticeable grain in the film that I can only assume are artifacts as I can see no reason why artistically they would be present.
Sound wise is where my disappointment is, while its Dolby TrueHD the centre vocals were strangely muffled and for a first on my system with either DTS HD or TrueHD I had to up the volume to make them clear.
Also I never really felt enveloped in the sound stage, it felt strangely flat and all at the front except for odd occasions such as the Messiah around the comet and the onrush of the tsunami.

Spike Owen
5つ星のうち3.0 Cities fall but they are rebuilt. Heroes die but they are remembered.
2011年9月19日に英国でレビュー済み
Amazonで購入
I gigantic comet is heading towards Earth, if it hits then life as we know it is doomed. Enter the president of the United States who launches a desperate plan to have NASA's finest blow up the comet before it gets here. In the meantime, all on the Earth prepare for the worst case scenario.

Deep Impact was always going to be a tough sell to the movie watching world. In spite of its best intentions to blend epic disaster with a great big human heart, Deep Impact neither appeased the sci-fi crowd or fulfilled the effects hungry popcorn brigade's gargantuan appetites. "Too talky" said one side of the cinema, "that's just ridiculous" said the other, "hey isn't this supposed to be a corny disaster film" asked the balcony, here in lays the problem. Director Mimi Leder and her writing team of Bruce Rubin and Michael Tolkin are guilty of not taking a side from which to launch their picture out of the mundane atmosphere. Or perhaps maybe, it was just a bold gamble that didn't pay off? but i'm sure nobody involved in the picture would have wanted the viewers to be hankering for the effects laden finale, and that's what happens, ultimately it's the so-so carnage that most end up remembering. Worst still is that outside of Téa Leoni's news lady central character, Jenny Lerner, no characters are fully formed to make us even care if they and the Earth actually survives. Which in a film pro porting to be an intimate study of relationships and how mankind copes with impending doom, is nearly unforgivable.

It's odd that in the same year as Bruce Willis and Michael Bay firmly went for the popcorn crowd with Armageddon, that Deep Impact was offered up as the thinking mans opposite side of the coin. Yet the reality is that Deep Impact got confused about its worth, and sadly falls some way short of being the fine movie that it obviously looked like being down on the page. A good cast is wasted and a brave move is sadly unrealised. 5/10 because deep down it does in fact pose some rather interesting questions, questions that at least make Deep Impact worth a revisit on a quiet and boring Sunday evening by the fire, but it's definitely a case of so near and yet so far far away.
続きを読む
3人のお客様がこれが役に立ったと考えています
役に立った
フィードバックを送信中...
フィードバックをお寄せいただきありがとうございます。
申し訳ありませんが、お客様の投票の記録に失敗しました。もう一度試してください。
違反を報告
レビュー を日本語に翻訳する

Enchantress
5つ星のうち5.0 Morgan Freeman for President
2017年10月14日に英国でレビュー済み
Amazonで購入
A humanistic approach to a disaster movie lately those are becoming rare e.g. Armageddon which was a great movie but less realistic I do recommend you watch both as they were realeased at the same time
続きを読む
2人のお客様がこれが役に立ったと考えています
役に立った
フィードバックを送信中...
フィードバックをお寄せいただきありがとうございます。
申し訳ありませんが、お客様の投票の記録に失敗しました。もう一度試してください。
違反を報告
レビュー を日本語に翻訳する

Ray
5つ星のうち4.0 Thoughtful film
2019年7月31日に英国でレビュー済み
Amazonで購入
Unlike other films on the subject this does to some extent focus on the effect of such on families rather than only on the 'action'. However, it perhaps dampens down the likelihood of the fear, panic and likely revolt that would happen, especially the closer the asteroid comes in the film; and the landing of a piece of it.
Also, the spacecraft entering the cometery tail might not encounter such huge boulders - just ice and dust.
Overall though well acted with a likable cast.
続きを読む
役に立った
フィードバックを送信中...
フィードバックをお寄せいただきありがとうございます。
申し訳ありませんが、お客様の投票の記録に失敗しました。もう一度試してください。
違反を報告
レビュー を日本語に翻訳する
その他の国際レビューを読み込む

Alan Bexley
5つ星のうち5.0 Great movie
2012年7月22日に英国でレビュー済み
Amazonで購入
This is a great movie with believable special effects. A great deal of time and effort went into making this film. The weightless effects look quite real and the effects people went to town with creating the surface of the comet. The suggestion that they could blow up a comet the size of this one into tiny pieces is a little unlikely but what does it matter? The film also shows the effect of a near end to the world on a family which is very emotional. Morgan Freeman plays the president with gravitas. All-in-all a great movie to spend the evening watching and now at a low price.
続きを読む
2人のお客様がこれが役に立ったと考えています
役に立った
フィードバックを送信中...
フィードバックをお寄せいただきありがとうございます。
申し訳ありませんが、お客様の投票の記録に失敗しました。もう一度試してください。
違反を報告
レビュー を日本語に翻訳する

Mopsy
5つ星のうち5.0 A good film to make you think
2020年2月29日に英国でレビュー済み
Amazonで購入
One of my favourite films. I just had to have the DVD so I can watch it again. A story of one young woman's growth and ultimate sacrifice
続きを読む
役に立った
フィードバックを送信中...
フィードバックをお寄せいただきありがとうございます。
申し訳ありませんが、お客様の投票の記録に失敗しました。もう一度試してください。
違反を報告
レビュー を日本語に翻訳する