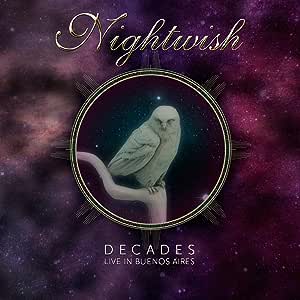 ZibZab
5つ星のうち5.0 Dark Chest of Wonders?
2019年12月11日に英国でレビュー済み
Amazonで購入
Stunning. Nightwish, one of the best metal bands out there, with one of the best singers in the world right now, performing a setlist of songs from across their career in front of a South American audience that goes insane in the way that only South American audiences do (and the energy of that crowd comes across on the CD as well as the DVD). There's a lot of pre-2005 material here, and Floor rises to the challenge, makes those songs her own, and truly impresses. There are moments of terror as you feel she's setting up a high note she has no chance of hitting - and then she does, spectacularly, laying to rest the ghost of Tarja once and for all (she's already done that, several times over, of course, but there are always a few naysayers). The whole band rise to the occasion behind her, and create one of the best live albums/DVDs of the decade (see what I did there?)
Negative points? Well, the newer material doesn't sit alongside the older songs too well, songs like Nemo and Amaranth really do eclipse the other tracks, and the choice of material from the Endless Forms album is baffling (what were they thinking?), and there are some huge omissions in the setlist, but it would be churlish to mention those.
Nightwish = simply staggering. Can't wait for the new album next year!

Salbrb
5つ星のうち3.0 New, not new Nightwish album
2019年12月11日に英国でレビュー済み
Amazonで購入
Loved nightwish thru the ages (ok was a late learner). So have bought every nightwish cd album I could buy. So again flicking thru Amazon, what a new nightwish album?! 🤓 So I bought. Ok, not new material, which I knew, but Floor killed (sorry) gethsemane, I want my tears back n ghost love score for me. Ok, I'm sure we all have our favourite nightwish singer, mine being tarja, floor (omg the greatest show on earth) n then Annette (scaretale n the amazing slow, love slow) They all had their singing ranges n sometimes you can't replicate another person's vocals! (Is what nightwish never wanted 2 do, ok, according 2 wikipedia) So if you're reading Tuomas Holopainen, get writing some more amazing songs that Floor can own! 🤓
続きを読む
3人のお客様がこれが役に立ったと考えています
違反を報告
レビュー を日本語に翻訳する

B. Swales
5つ星のうち5.0 New discovery
2020年2月15日に英国でレビュー済み
Amazonで購入
Accidentally stumbled across this band on YouTube auto play when their bloodstock 2018 festival appearance followed a iron maiden show I was watching all I knew was they were from finland and once sacked a singer called tarja and wow how lucky I was to discover this band . Started off with this live show and now I’m completely hooked on the eerie keyboards/heavy guitar and soaring vocals from their amazing third singer . Have preordered new cd and I now have a desire to buy the rest of their catalogue but where do I start ?? Highly recommend this cd and showtime story time live cd as well can’t wait to hear the rest
続きを読む
1人のお客様がこれが役に立ったと考えています
違反を報告
レビュー を日本語に翻訳する