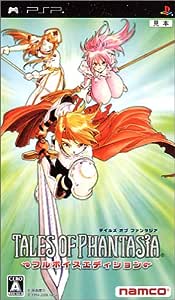 Micaiah
5つ星のうち5.0 this is probably the best version of the game out there
2018年5月23日にアメリカ合衆国でレビュー済み
Amazonで購入
I wanna start this by saying that this game is completely in Japanese. Basic Japanese reading comprehension (including Kanji, there's no hirigana and katakana-only mode) is needed to get the most out of this game. The PSP version of this game has not been officially released in any other language. However, the PSP has no region locking of any sort, thus it will play perfectly on a PSP from any region.

Tales of Phantasia is the foundational game for the Tales series (and in an odd bit if history, Star Ocean) and has had more rereleases and permutations than any other game in the series. Among those, this is probably the best version of the game out there. As the title states, all major story interactions are fully voiced, the voice samples are clear and we'll acted.
If your only experience with the game has been the Game Boy Advance version (which, if you're a native English speaker, it most likely is), there are some surprising changes here, including a fully polygonal 3D world map (towns and dungeons remain 2D), and much larger and more detailed character sprites for combat. Attacks and particle effects look noticibly better as well, and powerful spells no longer freeze the entire combat screen while they play out (similar to modern Tales games). In addition, the Tales series famous Skits are here, returning from the Japanese PSone version, though you don't have to wait for a prompt, you can simply press Select and Cress and the team will have a small conversation about their surroundings.
For the package itself, it came with a full color manual, with Kosuke Fujishima's character art, and one of his original illustrations adorns the cover.
Overall, Tales of Phantasia is masterful classic RPG, and this is the best version of it. If the language barrier isn't an issue, this game comes highly recommended for any PSP collection.
続きを読む
違反を報告
レビュー を日本語に翻訳する