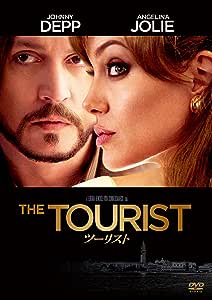 cora
5つ星のうち5.0 Stylish Thriller Showingcasing Venice in all its Glory
2018年3月4日に英国でレビュー済み
Amazonで購入
The cast is stellar by any standard with Angelina Jolie and Johnny Depp in the lead, ably supported by such greats as Steven Berkoff, Paul Bettany and Timothy Dalton. But the real star of the film is Venice. The glorious city is shown in all its beauty and that alone is a reason to watch this film.

Personally I also liked the story of the obsessive detective (Paul Bettany) investigating a multi million financial fraud. His only lead, the beautiful Elise (Jolie), leads him on a wild goose chase, cottoning on to a hapless American maths teacher on a holiday (Depp). While there are a few fun semi-action scenes on canals and rooftops of the venerable city, this is style over action all the way. Jolie is impossibly glamourous in a way that reminds of Sophia Loren (though she doesn't come anywhere near equaling that grand dame of Hollywood glamour). With the slovenly school teacher Johnny Depp plays another one of those odd characters he does so well. Steven Berkoff is perfect as villain of the piece. Paul Bettany has the dogged investigator down to a tee, and my only regret is that there is not more of Timothy Dalton who plays his superior. His appearance amounts to no more than a couple of short cameos.

The story takes its time developing, but it is well written (Julian Fellowes who also penned Downton Abbey and Gosford Park is one of the screenwriters), and with the beautiful heroine and the stunning filming locations it works well enough. You have plenty time to enjoy all the beauty. There are a few mildly comedic moments involving Depp's character being out of his element, at one time scrambling across the roofs of Venice in his pyjamas. Between the style and the glamour and the occasional moments of levity, this is reminiscent of the heist films and crime capers from the 60s. And that's not a bad thing. What you get here is a perfect bit of fluffy escapism with a story that works and is easy to follow. Sit back and escape to the magic of Venice for an evening.

The DVD has English subtitles for those who need them and also included are various extras:
- Bringing Glamour Back
- Canal Chats: Interviews (with cast and crew)
- Travelling the Canals of Venice
- Action in Venice
- The Gala
- Outtakes
- Interview with the Director
- Director's Commentary
続きを読む
10人のお客様がこれが役に立ったと考えています
違反を報告
レビュー を日本語に翻訳する

RENE'E
5つ星のうち5.0 WONDERFUL, ENJOYED AGAIN and AGAIN
2020年12月23日に英国でレビュー済み
Amazonで購入
Listen don't heed to the critics, this is a Sunday evening film with a glass of wine. Two exceptional thespians that absolutely connect making a romantic, at times funny,( well Johnny in pyjama's come on ) with a hint of danger in the mix , I loved it . Not only that you get to see beautiful Venice in all her splender. Always a Johnny fan and having watched Angelina only a few times I warmed to her ability to be a little lighter in her character and play the essence of feminism. Lost count of the times I have watched it , see for yourself, you won be disappointed
続きを読む
2人のお客様がこれが役に立ったと考えています
違反を報告
レビュー を日本語に翻訳する

Mr. Benjamin J. Raddon
5つ星のうち4.0 Different
2019年6月2日に英国でレビュー済み
Amazonで購入
I was pleasantly surprised by this movie, it wasn't a typical action thriller because there was barely any action in it, a short chase, a small boat rescue, but the rest was a well written plot with a few good twists, the sad thing is, movies like this don't come along much, & this one was 2010, before we started having pc nonsense & agendas forced at us (the new Star Wars movies for example) this movie is 9 years old now but refreshing.
続きを読む
3人のお客様がこれが役に立ったと考えています
違反を報告
レビュー を日本語に翻訳する

Reviewer19
5つ星のうち4.0 Brilliant Film, Truly Cinematic Experience
2020年4月14日に英国でレビュー済み
Amazonで購入
Saw this on Amazon Prime last year and was surprised how cheap it was on blu-ray. This is a steal. A brilliant film, fantastic plot, well executed with brilliant acting from Depp and Jolie, makes you wonder why they haven't done more films together. Brilliant ending, would definitely recommend.
続きを読む
1人のお客様がこれが役に立ったと考えています
違反を報告
レビュー を日本語に翻訳する

Sarah Garratt
5つ星のうち5.0 The Tourist [DVD]
2021年2月24日に英国でレビュー済み
Amazonで購入
watched this on prime video and Angelina Jolie is so amazing in all her projects like 'Girl Interrupted, Mr and Mrs Smith with Brad Pitt, Wanted, Lara Croft and others which I want). also Johnny Depp is so funny in all of his previous projects so had to get this.
the disc came brand new and sleeved, no digital download
続きを読む
違反を報告
レビュー を日本語に翻訳する
すべてのレビューを参照します
トップへ戻る
Amazonについて
Amazonでビジネス
Amazonでのお支払い
ヘルプ＆ガイド
日本語ショッピングのための言語を選択します。 日本ショッピングのための国/地域を選択します。
© 1996-2020, Amazon.com, Inc. or its affiliates