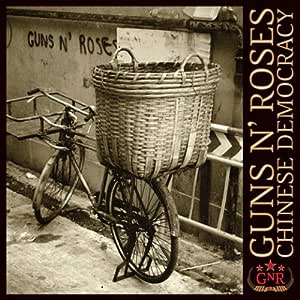 S. Lornie
5つ星のうち5.0 Superb album
2018年1月23日に英国でレビュー済み
Amazonで購入
When talking about the last Guns N' Roses album, Chinese Democracy, it is hard not to criticise Axl Rose for taking so long to release the damn thing. The record was re-recorded in full multiple times, saw multiple band changes and cost a whopping $13 million to produce. It is technically the most expensive record ever produced and that is not something Axl Rose should be bragging about.

However, I have to give credit where it is due. Despite taking a decade to release and the mess surrounding everything to do with its release, Axl and his pals put together an album that is actually very impressive from a technical perspective. The production and final mix is top quality avoiding compression and other nasty techniques found on modern records. Chinese Democracy quite literally sounds better than most albums that have been released since and features over an hours worth of quality music, some of which might not be to the taste of older fans but is quite enjoyable regardless.

From the get go, it is clear that Chinese Democracy is not your typical Guns N' Roses album. Gone are the days of Izzy and Slash, with them goes the classic rock sounds that was all over the bands first four records. Instead we are given what was at the time, a considerably more up to date sound. The songs have these hard rock moments but are mixed up with some heavy metal riffs and produced with an industrial flair. The combination is easily the heaviest, most flavoured album of the band's career.

The mix of songs styles on the record is impressive, especially considering how consistently good they are. The album title track is a satisfying start to the record and immediately proceeds through the highly enjoyable Shackler's Revenge and then into the criminally underrated song, Better. This song has a very memorable melody and devolves into some pretty heavy riffing. It is a great sounding song and is easily one of the best songs the band has produced since their debut album, Appetite For Destruction.

There Was A Time starts off a little slow, it seems like a stereo typical ballad and feels like it is going nowhere. But once the song hits the half way mark, the band just explode into a selection of heavy rhythms, guitar solos and some impressively high pitch vocals from Axl Rose himself. The song that immediately follows is called, Catcher In the Rye and is a much stronger song in general. The track is consistently good, features some excellent pacing including a fiery guitar solo half way through.

The band kick it back into high gear with the hard edged metal tunes, Scraped and Riad N' The Bedouins. Despite sounding nothing like the band of old, these two songs are very catchy rockers and provide the album with a much needed boost in energy, most of which dissipated with the song, Sorry. I think Sorry is one of the better songs on the record, it may be slow but the guitar riff together with metallic guitar tone just sounds excellent. The album ends on the well known Madagascar, the ballad This I Love and the song, Prostitute. The former are two good songs that hold their own in terms of the overall album quality, but the latter is just not very good at all. I enjoy listening to this record, but I do feel it is one track too long and would have ended perfectly had This I Love been the final track.

Despite being a little too long over all, I will not deny that Chinese Democracy is a very good album. Some people can argue that is in fact an Axl Rose solo record, but even if Slash and co were still in the group, it would have been very unlikely that they could have produced an album of this calibre. In fact, this is a better album than anything the previous members have released since their departure.

The best to enjoy Chinese Democracy is to literally forget everything that came before it. With exception of the voice, there are absolutely no similarities at all. But considering how well produced the album is, it deserves a lot of praise and I think people should definitely pick this album up, open their mind and simply enjoy the record for what it is. You'll find the album is very easy to find these days and usually it is going for only a couple of pounds. For that amount of small change, it is an absolute bargain. One that I highly recommend.

Published by Steven Lornie of Demonszone

ZeitGhoul (music is my sanctuary)
5つ星のうち3.0 4 or 5 great songs worth getting these alone....
2018年11月25日に英国でレビュー済み
Amazonで購入
Ok first 3 tracks and This I love are the really memorable tracks....even with the inexplicably bad tiny pause in Shackles Revenge. I think this one musical flow stopping moment emphasises the problems Axel obviously had producing the rest of this record.

The song writing talent is on show occassionly but this is the one roses album you will skip through.....even if you are a commited album listener.

I look forward to new material from most the original line up hopefully over the coming year or two. Maybe they could redo some of these tracks for that record because there are some great moments....e.g...Better always brings a smile to my face.... great song.
続きを読む
役に立った
フィードバックを送信中...
フィードバックをお寄せいただきありがとうございます。
申し訳ありませんが、お客様の投票の記録に失敗しました。もう一度試してください。
違反を報告
レビュー を日本語に翻訳する

Nigel Melvin
5つ星のうち5.0 MAGIC
2017年5月20日に英国でレビュー済み
Amazonで購入
WOW ! buy it now, They say it took years to finish, don't be put off by this. This purchase was for my son, I already had it and 'Silly Billy', William A Rose and 'friends' made a terrific album, which has probably never received the accolades it deserves. This album is certainly as good as Illusion one. Nuff said !
続きを読む
2人のお客様がこれが役に立ったと考えています
役に立った
フィードバックを送信中...
フィードバックをお寄せいただきありがとうございます。
申し訳ありませんが、お客様の投票の記録に失敗しました。もう一度試してください。
違反を報告
レビュー を日本語に翻訳する

Amazon Customer
5つ星のうち5.0 Love it
2016年4月7日に英国でレビュー済み
Amazonで購入
I came back to this recently after a few years. I liked it first time around and listened to it for weeks, much more than I expected too. And the more I listen this time, the more I like it still. Its a great rock album, some amazing choruses, great guitar work, and some genuinely emotive moments in the slower songs. If you can drop your preconceptions and take it on its merits outside all of the history, band politics and media stories - it is a fantastic modern rock album with some belting tunes!
続きを読む
4人のお客様がこれが役に立ったと考えています
役に立った
フィードバックを送信中...
フィードバックをお寄せいただきありがとうございます。
申し訳ありませんが、お客様の投票の記録に失敗しました。もう一度試してください。
違反を報告
レビュー を日本語に翻訳する
その他の国際レビューを読み込む

Mr. L. Legrove
5つ星のうち4.0 buckethead!!!!
2008年12月31日に英国でレビュー済み
Amazonで購入
never liked guns n roses, ibought this for my brother-in-law. when he decided to put it on during christmas day, i thought 'yawn..'..but, it hit me straight away how different it is. the production is excellent, axl's vocals are hell of a lot better and overall more heavier. the guitaring is awesome as well as the drumming, and when i looked at the booklet i dropped it in disbelief. for there i discovered buckethead was responsible for said riffing. and the drummer? cult legend BRAIN of buckethead / primus fame!! that, explains why this is so good. forget slash, i my opinion was over-rated anyway, buckethead gives him a run for his money! his trademark lunacy is written all over it! track 9 has lightning fast solos..is this the same band? no it isnt, but axl has replaced the old with a new fresh of breath air! never heard buckethead? check this out and then go for buckethead cds..welcome back!!
続きを読む
1人のお客様がこれが役に立ったと考えています
役に立った
フィードバックを送信中...
フィードバックをお寄せいただきありがとうございます。
申し訳ありませんが、お客様の投票の記録に失敗しました。もう一度試してください。
違反を報告
レビュー を日本語に翻訳する

Tomz
5つ星のうち3.0 okay, so i dont 'hate' it..
2013年2月15日に英国でレビュー済み
Amazonで購入
As many reviews have already said this is not guns n roses as people know... so if you have your heart set on guns n roses 2 this is not the album for you... however, that being said this album isnt particually bad, it has decent enough songs, some great guitar work from the likes of buckethead etc. However, the reason this is only 3 stars to me is that its 'gnr' without filling in as 'gnr', its axl's solo album. But overall as an 'axl solo album', yeah its okay..
続きを読む
1人のお客様がこれが役に立ったと考えています
役に立った
フィードバックを送信中...
フィードバックをお寄せいただきありがとうございます。
申し訳ありませんが、お客様の投票の記録に失敗しました。もう一度試してください。
違反を報告
レビュー を日本語に翻訳する

sarah parkington
5つ星のうち3.0 Good but nothing like the original GNR
2015年5月16日に英国でレビュー済み
Amazonで購入
Big fan of the original guns and roses albums people around me kept saying don't buy it, waste of money, terrible cd but after listening to the cd i quite like it and some songs really good like Chinese democracy and There was a time.
続きを読む
1人のお客様がこれが役に立ったと考えています
役に立った
フィードバックを送信中...
フィードバックをお寄せいただきありがとうございます。
申し訳ありませんが、お客様の投票の記録に失敗しました。もう一度試してください。
違反を報告
レビュー を日本語に翻訳する

User1
5つ星のうち3.0 Actually decent!
2014年8月7日に英国でレビュー済み
Amazonで購入
I was actually pleasnatly surprised by this album. The modern GnR and Axl come in for a fair bit of criticism, but this album is actually good. Perhaps a bit over produced, but if you like rock music I would be very surprised if you're not smacking your steering wheel in the car in line with the drum riffs on this album whilst driving. Worth listening to before judging!
続きを読む
役に立った
フィードバックを送信中...
フィードバックをお寄せいただきありがとうございます。
申し訳ありませんが、お客様の投票の記録に失敗しました。もう一度試してください。
違反を報告
レビュー を日本語に翻訳する
その他の国際レビューを読み込む

jake cutter
5つ星のうち5.0 Love this album
2014年12月25日に英国でレビュー済み
Amazonで購入
Love this album, but if u are a audiophile, I strongly urge any buying this to go for the cd over the vinyl. Never thought id say this, but the difference in depth and clarity is far superior. Its weird, its the only cd I have that sounds better than its supposedly better vinyl big brother.
続きを読む
1人のお客様がこれが役に立ったと考えています
役に立った
フィードバックを送信中...
フィードバックをお寄せいただきありがとうございます。
申し訳ありませんが、お客様の投票の記録に失敗しました。もう一度試してください。
違反を報告
レビュー を日本語に翻訳する