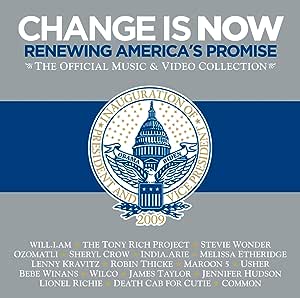 Jeff Mathews
5つ星のうち2.0 Poor for history
2016年8月27日にアメリカ合衆国でレビュー済み
Amazonで購入
Not impressed by any of the music or performances. For such a historic moment, better music should have been chosen.
続きを読む
違反を報告
レビュー を日本語に翻訳する

L. Boki
5つ星のうち5.0 Another Sterling Memorabilia of President Obama's Magical Presidential Campaign
2013年5月27日にアメリカ合衆国でレビュー済み
Amazonで購入
Being a child from a Civil Rights home, it still was unfathomable that the senator that mesmerized millions at the 2004 Democratic Convention with his gifted oratory would indeed become the most revered and powerful figure not only in American history, but globally where he drew hundreds of thousands in London, Paris, Rome, etc before his first win! President Obama and I are both children of Motown and the classic rock era. I experienced the tragedies of losing President John F. Kennedy, Dr. Martin Luther King Jr. and "deserved to be" forthcoming President Robert Kennedy. Without a doubt, the United States of America and the world just could not accept the profound lost of these iconic figures.
1968 also gave us "the summer of love"(1967), as well as, the first all black cast of an Emmy-Award winning "Best Television Special", "T.C.B." starring
with   along with   defining " " and Aretha's rendition of " " helping to give further identity to the burgeoning Women's Liberation Movement" and "LGBT Movement". Motown, often tied with Johnson Publications, as the most successful black business, could boast owning no less than 5 of the Top 10 singles in the last week of December 1968!
It is definitely further cause for celebration to have this great CD/DVD "
". I have been able to record the majority of President Obama's campaign speeches and appearances from the first and second treks.
President Obama is a brilliant orator. Even if he had not won by sizable margins, his appearances remain riveting, entertaining and highly collectible.
Add into the mix, the man actually can sing.......has saluted Motown with a White House special evening, Stevie Wonder's active involvement in his campaign. Rhonda Suzanne, Tracee Lane and Chudney have also actively campaigned for the President!!!
This will be another cherished memento!

Jessica Weissenburger
5つ星のうち1.0 Not What I Was Expecting
2016年9月24日にアメリカ合衆国でレビュー済み
Amazonで購入
The shame is that there are a few songs on here that I would have LOVED to have. I didn't realize the CD was supposed to be a campaign-esque CD with Barack Obama talking during certain tracks. Very disappointed because the reason I got this was for Maroon 5's Pure Imagination cover that I couldn't find anywhere else.
続きを読む
2人のお客様がこれが役に立ったと考えています
違反を報告
レビュー を日本語に翻訳する
すべてのレビューを参照します
Amazonプライム会員ならお急ぎ便、日時指定便が使い放題
さらに、映画もTV番組も見放題。200万曲が聴き放題 。クラウドに好きなだけ写真も保存可能。
> プライムを無料で試す