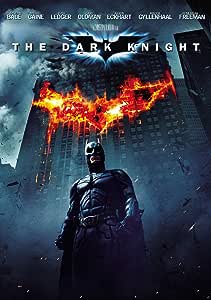 Mrs. Hatter
5つ星のうち5.0 I Came for Batman, I Stayed for Heath
2019年5月10日に英国でレビュー済み
Amazonで購入
I'm really not the biggest fan of Christian Bale at all but he does a great job of becoming his character enough in the film that you forget he is him and just see him for the character he's portraying instead, which he does a great job with. Without argument though, Heath Ledger steals the entire film with his darkly mesmerising portrayal of a genuinely unnerving Joker - the only Joker in any Batman realisation I've ever found genuinely scary (or anything at all other than silly or funny with the previous versions). And this darkness is one of the pillars that makes Nolans Gotham in this film so great - it's dark, gritty and murky and feels heavy and undefined as both good and bad forces try to manipulate the city and her people for better or worse to follow the right truth - there is genuine tension in the film and both Ledger and Bale along with their support cast all handle it extremely well with great realism. Still one of the best Batman films to date, for sure!
続きを読む
5人のお客様がこれが役に立ったと考えています
違反を報告
レビュー を日本語に翻訳する

J. McDonald
5つ星のうち5.0 The Dark Knight (Two Disc Special Edition).
2020年4月13日に英国でレビュー済み
Amazonで購入
The second film in the trilogy with the much praised performance by Heath Ledger as the Joker; it also sees the appearance of Harvey Dent/Two-Face – another of Batman`s many adversaries.
Beautifully filmed using IMAX it's a visually thrilling effort with a fair number of set-piece action scenes; the central performance is without doubt that of Ledger, who brings a real psychotic edge to the Joker character.
The film is, though a bit over-long for my tastes and how well it works as a stand alone film is difficult to determine – it certainly ends with the suggestion of unfinished business – see what you think.
The UK 2-disc DVD edition presents the film on disc 1 with no extras (subtitles are available as shown) disc 2 contains a selection of short but interesting featurettes on the making of the film and a series of the fictional Gotham Cable News bulletins.
Photo galleries of concept art, posters and production stills complete the extras disc.
4 ½ stars.
続きを読む
1人のお客様がこれが役に立ったと考えています
違反を報告
レビュー を日本語に翻訳する

spydermanbruce
5つ星のうち4.0 A new, menacing Batman fighting to protect the innocents of Gotham City brilliantly played by Christian Bale.
2017年2月26日に英国でレビュー済み
Amazonで購入
Calling all Bat fans. This is Batman at his most fearsome, a protector of the people of Gotham City but with that evil touch that all villians must fear. Brilliantly played by Christian Bale with a voice that changes from a light, normal human voice when' unsuited' but one which changes to a deep, menacing tone when he becomes 'The Batman'. Maybe a bit too frightening for young ones . The basal tones on the disc recording are too low (probably to give Batman's voice more menace) .(hence the 4 star rating) I found I had to re adjust the sound settings on my Blu ray player but found this impossible to do as they were 'fixed' on the disc recording. Any hi fi buff would find this slightly irritating whilst watching the film. I did. That said, it's full of action and a good cast means this Batman is, for me, one of the best.
続きを読む
違反を報告
レビュー を日本語に翻訳する

sarah cox
5つ星のうち5.0 Amazing film, just buy it
2020年5月6日に英国でレビュー済み
Amazonで購入
Meant to see this when it came out, never got round to it, meant to buy the DVD when it first came out, never got round to it, have now bought and it was worth the very very very long wait (a wait entirely due to my own incompetence I hasten to add and not a slow delivery; it was dispatched with admirable speed!) This is a great film, if you are the one person who is less organised than me and has not yet seen it, buy it now.
続きを読む
違反を報告
レビュー を日本語に翻訳する
すべてのレビューを参照します
Amazonプライム会員ならお急ぎ便、日時指定便が使い放題
さらに、映画もTV番組も見放題。200万曲が聴き放題 。クラウドに好きなだけ写真も保存可能。
> プライムを無料で試す