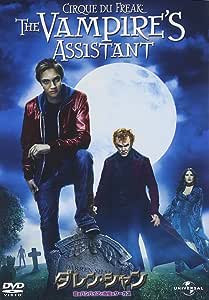 angharad mair
5つ星のうち2.0 Eh.
2016年6月14日に英国でレビュー済み
Amazonで購入
The mediocre rating does not signify any damage or fault on behalf of the seller. It simply due to the actual movie. It's good, but I'd recommend it to the 11-14 year old audience only. I remembered absolutely loving the book series when I was younger but had never actually seen the film, so I decided to get it and see if it fit with the books. It however, did not. The film isn't that great and if you've read the books, you'll notice a lot of faults. Other than that, it was a little boring. So personally, I would not recommend.
続きを読む
2人のお客様がこれが役に立ったと考えています
役に立った
フィードバックを送信中...
フィードバックをお寄せいただきありがとうございます。
申し訳ありませんが、お客様の投票の記録に失敗しました。もう一度試してください。
違反を報告
レビュー を日本語に翻訳する

Kristin
5つ星のうち5.0 Good fun, but take care if you enjoy the books
2010年3月21日に英国でレビュー済み
Amazonで購入
The film is a good standalone film, fine for teenagers and adults to watch together. What they have done though is take a series of events spread throughout the series of the books, and mixed them in with some new characters and scenarios. This may or may not really annoy you. I quite like the douglas adams approach where each film, radio, book and TV series was different, and stood on their own. However some people hate this, and want things kept exactly true to the stories they have read and loved, and if this fits you then you probably wont enjoy the film! The film also gives away some stuff you only find out about in much later books than Cirque Du Freak, so wait till you have finished the books if you don't like spoilers.

Finally it has a very unique take on Vampires and how they are made, live and just about everything else. This might be confusing to some youngsters if they arent used to worlds with different rules. However the new ways of this world are explained clearly and not in any patronising way, so its easy to pick them up as you go along.

So be warned, and if the above doesn't put you off, then enjoy a really good film with some excellent characters and effects.

PJ Rankine
5つ星のうち4.0 Darker than Harry Potter
2010年3月12日に英国でレビュー済み
形式: Blu-rayAmazonで購入
I've only read the first book in the series and that was generally dealt with in the first half of the film so I don't know how the rest of the adaptation goes but viewers shouldn't always relate the films to the books that inspired them. As a stand alone piece there was nothing wrong with this film at all, I enjoyed it all apart from Chris Massoglia's unfortunate nasal tones. It was exciting and funny at times and treated the freaks of the titular Cirque with sympathy and dignity. Overall it was great entertainment and from first impressions if it turns into a series then it should be less repetitive than Harry Potter. The transfer to blu ray is first class although its presented in wide screen and the audio track is excellent. The start up was rather slow and I was suprised to see it link straight into BD live and download a feature about the new 'pocket Blu' app for smartphones. It has a good selection of extras including 36 deleted scenes. I would like to have had the option to re-introduce these to the main feature as a lot of them dealt with life in the Cirque. Definitely worth the cost of a blu ray this one.
続きを読む
1人のお客様がこれが役に立ったと考えています
役に立った
フィードバックを送信中...
フィードバックをお寄せいただきありがとうございます。
申し訳ありませんが、お客様の投票の記録に失敗しました。もう一度試してください。
違反を報告
レビュー を日本語に翻訳する

Josh
5つ星のうち2.0 A messy attempt at bringing a great story to life
2011年3月14日に英国でレビュー済み
Amazonで購入
I rate this film 2 stars, having seen it in the cinema. I cannot decide whether this is too harsh or not harsh enough.

For a start, the actual film isn't terrible, it's enough to hold some interest I guess. As a huge fan of the books, naturally I was disappointed since it was only loosely based on the books, and the casting was poor enough to ruin my perception of the characters masterfully created in the books. Reilly was an awful choice for Mr Crepsley in my opinion since he is usually starring in films is a complete idiot so the whole dark side to him is lost. I think whilst it is impossible to completely recreate everything in the books, the fact they made up a new key character and made her Darren's love interest was just annoyingly painful for hardcore Darren Shan fans. The film is also too comical and also not dark enough for the fans of the books.

I did not give this film one star because it was not a complete disaster, as I said the film is enjoyable enough at points. Some younger children will find this an enjoyable film. However my main bone to pick with this film is that it just seems like it has no proper target audience. As far as I know, in the UK this film is rated a 12. The problem here is that the film would be more appealing to younger children, yet they cannot access it since it has a 12 rating, yet the film is not sinister or unnerving enough to satisfy any teen audiences above 12. As a result, the film is incredibly hit or miss with audiences. Yet most likely a miss, since young children who should be enjoying it are restricted from viewing it, teenagers will find it too childish, and die-hard Darren Shan fans will be disappointed by the deviation from the plot. In fact, as I write this conclusion, I think I answered my original question of "is 2 stars not harsh enough?" I think I was being too kind now.
続きを読む
3人のお客様がこれが役に立ったと考えています
役に立った
フィードバックを送信中...
フィードバックをお寄せいただきありがとうございます。
申し訳ありませんが、お客様の投票の記録に失敗しました。もう一度試してください。
違反を報告
レビュー を日本語に翻訳する

Mr. Norman M. Brown
5つ星のうち4.0 Fun with Fangs!
2016年4月8日に英国でレビュー済み
Amazonで購入
This is an adaptation of the first novel from the popular Darren Shan novels - Cirque Du Freaque. Whilst this is an enjoyable horror comedy, with many key elements of the book, it differs in tone from the novels. Mainly this is a result of the miscasting of John C Reilly as the wise and ancient vampire Crepsley - a role of that might have been better filled by someone like Max Von Sydow. However, if you have never read the books, I am sure you would enjoy this goth-com. Look out for the ever excellent Ray Stevenson as Murlagh.
続きを読む
役に立った
フィードバックを送信中...
フィードバックをお寄せいただきありがとうございます。
申し訳ありませんが、お客様の投票の記録に失敗しました。もう一度試してください。
違反を報告
レビュー を日本語に翻訳する
その他の国際レビューを読み込む

KellyJane
5つ星のうち5.0 Cirque Du Freak Fun
2018年2月17日に英国でレビュー済み
Amazonで購入
My son loves the Cirque Du Freak books so I was pleased to see this DVD on sale. He watched it and said its not the same as the film but there was enough horror/action to keep him interested and he will watch it again.
続きを読む
1人のお客様がこれが役に立ったと考えています
役に立った
フィードバックを送信中...
フィードバックをお寄せいただきありがとうございます。
申し訳ありませんが、お客様の投票の記録に失敗しました。もう一度試してください。
違反を報告
レビュー を日本語に翻訳する

sovay
5つ星のうち3.0 very disappointed with this film.
2011年4月23日に英国でレビュー済み
Amazonで購入
I'm almost finshed The Saga of Darran Shan on my kindle and am loving it.When I saw there was a film version, I just had to get it. Very big mistake! It's so far away from the novels that it should be called only very loosely based on TSODS.
Why go and turn it into an American story, that's where the money was I guess.But there were some small changes that were not needed. The little people, for example, why could they not keep their blue robes,and keep their features hidden. Also Harkat didn't get a name till a few books in. Unless there have been plot changes, there are quite a lot of spoilers for those of us who haven't finished the books yet

L. Camidge
5つ星のうち3.0 Vampires? They're just harmless fun
2010年4月7日に英国でレビュー済み
Amazonで購入
Impeccably PG - I lent it to a friend who watched it with his six year-old - and a great introduction to the undying genre of vampire-lit. Top-class actors and no overt romance or sexuality: I'd have loved this when I was nine, but by the time I was 12 I'd have voted for Stephanie Meyer. Progress? nah, but that's hormones for you.

I watched it with a class of 13 year-olds, and was afraid they might find it tame and asexual (not that the word is in their lexicon). But most of them enjoyed it, as they are largely boys who I suspect have hormonal stirrings in the undergrowth but are (thankfully for all concerned) still at the wrestling/giggling/boasting/drawing cocks on each other's books stage.
続きを読む
役に立った
フィードバックを送信中...
フィードバックをお寄せいただきありがとうございます。
申し訳ありませんが、お客様の投票の記録に失敗しました。もう一度試してください。
違反を報告
レビュー を日本語に翻訳する

Siân
5つ星のうち3.0 Ok
2017年3月24日に英国でレビュー済み
Amazonで購入
Ok. A nice treat for pupils when reading the books. It combines the first and second book into one film and changes quite a lot of the details so worth reading the books first. The books are definitely better than the film.
続きを読む
役に立った
フィードバックを送信中...
フィードバックをお寄せいただきありがとうございます。
申し訳ありませんが、お客様の投票の記録に失敗しました。もう一度試してください。
違反を報告
レビュー を日本語に翻訳する