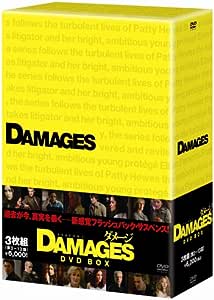 skb17
5つ星のうち3.0 A perfect start with a so-so finish
2009年9月2日に英国でレビュー済み
Amazonで購入
I was split between giving this three and four stars, because it starts off so well... and then tended to go downhill.

Firstly, the pilot. Wow. This was so tightly written. From that first minute it had me enthralled as to what was going on. Starting at the end, with a murder, then going back six months to see how it unfolds is genius.

Glenn Close in particular was enthralling as Patty Hewes, and Close embodied her with a quiet malevolence with the occasional glimmer of a softer side. But probably the star of the show, for me, is Zeljko Ivanek as Ray Fiske -- purely because he's one of the few characters that feels complicated, likeable and feels like he undergoes any form of emotional journey throughout the first season.

But after about episode 3, the pace starts to stall. Filler stories come in of family antics etc. One character faces leaving the law firm, and it adds nothing to the overall narrative. Now any show ever created tends to have arc plots and episode plots, so I feel bad criticising the show for this. But it was hard to stomach after the extremely focused storytelling of the first three episodes, and the attempts felt half-hearted.

The show then kind of stumbles towards the end, and does pick up some pace again in the last few episodes. And while there are some good plot twists towards the end, the main overall arc feels unsatisfactory. The revelations that have been dangled for the season weren't revelations at all, and some plot devices (such as a stalker story) just make the viewer feel cheated because they were obvious filler.

I think as a six episode season this could have been stunning. As it is, it has its highs and lows. It reminded me most of 24, and I think fans of that show will probably like this. At the price it is, I'd still highly recommend watching it. You could certainly do a lot worse for 13 episodes of TV.
続きを読む
9人のお客様がこれが役に立ったと考えています
違反を報告
レビュー を日本語に翻訳する

I admit that I was completely taken into the glossy, glamorous, ultimately shallow world of the US legal system as depicted here - and I thoroughly enjoyed every moment.

While I fully accept the comment that the show sometimes felt like an ongoing marketing campaign, on a perverse level, I actually felt that element added to its enjoyment. Moreover, neither the show nor the actors involved, ever appeared to take any of it too seriously.

As for the Rainbow comparisons, I actually thought Rose Byrne was pretty good as the clever but extremely naive, rather pompous young lawyer, who makes the mistake of believing in her abilities just a little too much. And Glen Close makes a hugely enjoyable 'villain'.

To any potential viewer, don't over-analyse, just sit back and enjoy!

I've given it 5 stars because it was so entertaining, and on watching the series a second time, I loved it even more. Good television is a rare commodity in this reality/celebrity TV obsessed age, and I salute any series steers away from this sorry state of affairs.
続きを読む
3人のお客様がこれが役に立ったと考えています
違反を報告
レビュー を日本語に翻訳する

J. Cronin
5つ星のうち5.0 A modern legal drama
2009年10月13日に英国でレビュー済み
Amazonで購入
Glenn Close is an illustrious actress with an imposing screen presence. But she has waited until 'Damages' to make her regular appearance on our television screens, delivering a modern and dramatic take on the traditional lawyer genre. In the vein of '24' and other modern series, Damages focuses on one court case, with many subplots and undercurrents.

Patty Hewes (Close) is a leading and feared litigator. She is currently spearheading a civil suit against billionaire Arthur Frobisher (Ted Danson) whose company collapsed with 'accounting irregularities' leaving his employees without their pensions. Hewes hires recent graduate Ellen Parsons (Rose Byrne) who turns out to be more than a match for Hewes' manipulations and ploys. Parsons' involvement with Hewes will drag her family and friends deep into a web of corporate deceit and high stakes litigation.

As the series draws to it's gripping close, it becomes clear to the viewer that everything you've seen on screen matters. There are no wasted scenes or screentime in this high-paced, intricate drama. An exciting and moden soundtrack makes this the best legal drama in years. And interestingly, we never see the inside of a courtroom!
続きを読む
違反を報告
レビュー を日本語に翻訳する

Art
5つ星のうち5.0 BEST US series since 6 Feet Under
2009年11月10日に英国でレビュー済み
Amazonで購入
Last winter we sat through all 5 years of '6 Feet Under' again.. Since we watched it first time nothing came along to equal a series in that style. I tried 'Brothers and Sisters' because Rachel (Brenda Chenoworth) Griffiths was in it; sadly it was EXTREMELY sugery and weak, more like a radio serial, with very static photography.

But NOW we have discovered 'Damages'!

Glenn Close was the initial draw, and is superb, but Rose Byrne is also excellent (and Australian like Rachel Griffiths but you'd never guess from her performance). And the 3 writers have created a women + women scenario for the main 2 characters, not unlike Cagney and Lacey many years ago, but these 2 are adversaries.

The story is complex, told in 'time layers' back and forth, so you know in the first episode what you THINK has happened, but the full story is only brought up to date in the last episode, and the twists and turns are gripping. The cinematography is as good as any feature film, and combined with a great cast, you are GRIPPED by this series.

I watched it all over one week!!

100% recomended ~ televison does not get any better than this.
続きを読む
違反を報告
レビュー を日本語に翻訳する

The Reader
5つ星のうち5.0 Great series
2018年1月27日に英国でレビュー済み
Amazonで購入
I live in France & because we don't have Sky I was looking for series we might have missed. I came upon this rare gem when doing a search. My husband & I were captivated by the writing & the following 4 series were quickly ordered. Excellent scriptwriting, characters vicious, & well portrayed by the actresses & actors.
続きを読む
違反を報告
レビュー を日本語に翻訳する
すべてのレビューを参照します
Amazonプライム会員ならお急ぎ便、日時指定便が使い放題
さらに、映画もTV番組も見放題。200万曲が聴き放題 。クラウドに好きなだけ写真も保存可能。
> プライムを無料で試す