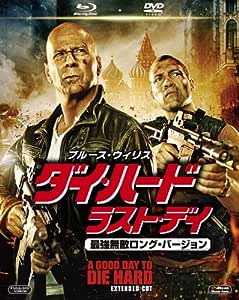 Hooper's Cigar
5つ星のうち2.0 Stay on Vacation!
2019年7月8日に英国でレビュー済み
Amazonで購入
In the late 80s, a fresh faced TV star made a smooth transition to the big screen by creating a vulnerable and human action hero in the form of New York cop John McClane in what was arguably one of the finest adventure films ever made: Die Hard. Now, 25+ years later time hasn't exactly been kind to detective McClane as he's appeared in 3 subsequent sequels of varying quality and now with this, the fifth go around for our hero being the absolute worst.

After patching things up with his daughter Lucy (Mary Elizabeth Winstead who also returns for a small cameo) in the previous lacklustre entry (which somehow manages to be better than this by sheer default), McClane (an annoyed Bruce Willis) now has to put things right with his estranged son, Jack (Jai Courtney), who has been arrested in Moscow. Mistakenly, our chrome domed hero thinks his son is a criminal, so it comes as a shock to learn Jack is actually working undercover to protect government whistleblower, Komarov (Sebastian Koch). Cue a number of over the top action sequences which include one of the silliest car chases ever put to film, a plethora of gun battles (with McClane now apparently a crack shot with a ridiculously big machine gun) and enough bored line readings from an exasperated cast to fill a full season of 'Crossroads'. Bruce Willis has been good value in the past, but now it seems he's had enough of this 'silly, action hero business' and his performance is one of contempt more than willing participation. Granted, he's getting on a bit but the screenplay almost sidelines him in his own movie and you ultimately tire of his endless 'I'm on vacation!' line being rolled out whenever he is called upon to do something other than smirk at the screen. Jai Courtney fairs a little better as his son, but even the greatest actor in the world could make this character fly whilst the rest of the cast range from serviceable to bored. Director John Moore embues his movie with a grim, saturated look that in his mind obviously shouted 'gritty and authentic' but in reality is dull and lifeless, with enough fake film noise to render the cast being engulfed in a snow storm. The less said about Skip Woods screenplay the better. I bet he wishes it didn't exist, either.

Fox's UK Blu-Ray release as always sports a fine transfer with solid audio. There are a number of extra features on the disc, but I don't know if I have it in me to explore them after watching the movie. Such a shame, as I'm a big Die Hard fan
but if I were to be honest, this isn't Die Hard. Stick with the original.

David McM
5つ星のうち2.0 Not for me.
2016年2月19日に英国でレビュー済み
Amazonで購入
As a huge fan of Die Hard, Die Hard 2 & Die Hard with a Vengeance, I must admit, when I first heard there was a 4 installment planned for release, I was skeptical.

But, in all fairness Die Hard 4 (or Live Free or Die Hard) was watchable.

There are flaws and I do have quibbles about it but the main one would have to be the directors seemingly insatiable obsession to bamboozle the viewer with computer-related jargon.

But, again it's a minor quibble.

John McClane fights terrorists, with his son. The same son who, in Die Hard, couldn't even answer the phone before his sister when Holly phones the house to see if John had called.

Now he's running about, blowing up Russian gangsters with his dad?

But this is like a fart in a hurricane compared to the rest of the flaws in this movie.

A. Chell
5つ星のうち1.0 97 minutes of my life I'll never get back
2014年6月18日に英国でレビュー済み
Amazonで購入
Bruce Willis' pension fund must be performing badly, because I can't think of any other reason for his involvement in this completely unnecessary and ill-judged addition to the Die Hard franchise. Only the inclusion of "Die Hard" in the title will have stopped this abomination sinking, deservedly, without trace.

Even Willis seems to have regretted his decision to return to the character of John McClane, with a performance so lacklustre as to fall far beneath the level of "phoning it in".

Add in a ludicrous plot, poorly staged set pieces and some of the most unrealistic stunts ever committed to film and the whole project (hopefully) becomes the death knell for the series.

rbmusicman/and/movie-fan'
5つ星のうち3.0 'O.T.T' ACTION' (ENJOYABLE BUT NOT THE EQUAL OF THE EARLIER FILMS IN THE SERIES)
2013年6月11日に英国でレビュー済み
Amazonで購入
Another dose of over-the-top action in the highly enjoyable and explosive
'Die Hard' series...........though...........
* It's fair to say this is a long ways short of the franchise's earlier releases,
though, it does entertain
This time our hero 'John McClane' travels to 'Moscow' to rescue his estranged
son 'Jack' from imprisonment.
'Jack' is involved in secret-service ( C.I.A ), 'John' had no idea that was the
case, till now that is.
After a superb car-crunching car-chase the two team up initially to rescue
the Russian that had been seemingly snatched from 'Jack's' protection.
leading to ...........
The two stumbling into a plot to steal nuclear weapons which could threaten
world peace.
Father and son raise hell in 'Russia' with explosive action, superb car-chase
and fire-fight sequences....
Maybe not the best in the series but certainly worth a viewing.
I believe, if that is the intention, that it would be a mistake if the 'Die Hard' series
was to continue with 'Jai Courtney' in the lead role
Sadly the action heroes we have followed down the years are reaching an age when
credibility becomes an issue, it is my feeling that 'Sly's' role in (Rambo).....
'Arnie's' in ( Terminator ) and 'Bruce' ( Die Hard ) are roles that belong to
them, we've loved and enjoyed their part in these explosive action series, now,
it's surely time to walk away leaving our memories in tact.

Graham Matthew
5つ星のうち1.0 A good place for a franchise to die. And does.
2017年7月30日に英国でレビュー済み
Amazonで購入
What the beelzebub have they made? Die Hard in Russia... Only you can blatantly see it wasn't filmed in Russia.
The editor should've been fired. The director is clueless. Bruce Willis looks totally bored. And we have the casting of Jai Courteney. Yippee-ki-yay cobber! Why was this total travesty green-lit? It beggars belief.
Plus a finale shoot-em-up at Chernobyl (yes, really!) that defies all logic. Utter crap. Avoid!

Starman
5つ星のうち3.0 A good day to possible have made a better instalment to the franchise!
2015年6月25日に英国でレビュー済み
Amazonで購入
I've been a fan of the Die Hard franchise since the beginning (when I was probably too young to watch it!). Each one has there good bits and bad bits, but this one mainly contains bad bits for me. I just couldn't get on board with the story or the characters. Whereas I thought number 4 had the same feel as the other die hard movies, sadly this just doesn't. It feels more like some other movie with the name attached at the last minute. I don't feel this added anything to the franchise.
However, I did think it looked good, with a grittiness to some of the action. It just lacks that sparkle I have been used to from previous instalments.
If you want only action then this will be fine. Although I wouldn't consider it a Die Hard movie myself.

andy.b.
5つ星のうち1.0 This film has high production values and often looks nice, action scenes are well done but
2015年5月23日に英国でレビュー済み
Amazonで購入
This film has high production values and often looks nice,action scenes are well done but....and it's a big but,Bruce Willis is given such weak dialogue that he hardly plays any part at all,he simply seems to be along for the ride(and no doubt a nice pay cheque),in more ways than one,a little bit like the viewer. However there is one redeeming feature. On her way to the helicopter on the rooftop the female character shows us a cracking pair of legs. No more Die Hard's thank you,Bruce has done his bit.
続きを読む
2人のお客様がこれが役に立ったと考えています
役に立った
フィードバックを送信中...
フィードバックをお寄せいただきありがとうございます。
申し訳ありませんが、お客様の投票の記録に失敗しました。もう一度試してください。
違反を報告
レビュー を日本語に翻訳する

The Movie Diorama
5つ星のうち2.0 A Good Day to Die Hard...what a mess!
2017年4月19日に英国でレビュー済み
Amazonで購入
A Good Day to Die Hard...what a mess! I'll start off by saying I appreciate the use of practical effects, the action scenes and the awesome slow motion shot of the helicopter crashing. But apart from that, this should not be in the Die Hard franchise. Lazy script, generic plot, unmotivated characters, choppy editing, messy camerawork and another forgetful villain. Honestly do these studios never learn!? This quite frankly may have killed the franchise. If you need to watch something with your brain turned off, it's here.
続きを読む
役に立った
フィードバックを送信中...
フィードバックをお寄せいただきありがとうございます。
申し訳ありませんが、お客様の投票の記録に失敗しました。もう一度試してください。
違反を報告
レビュー を日本語に翻訳する

Martinlawrencecocksedge
5つ星のうち5.0 worth another watch
2018年10月19日に英国でレビュー済み
Amazonで購入
Arrived in swift tine. Seen this before on dvd anx took the option of viewing on blu ray better version extended cut footage never seen in cinemas. I enjoyed this just as well like the other die hards, this one's mind blowing,gripping, pulsating action and usual rip roaring,intense. Can't fathom why the mixed reviews on this as I can't see any faults. Enjoyable
続きを読む
役に立った
フィードバックを送信中...
フィードバックをお寄せいただきありがとうございます。
申し訳ありませんが、お客様の投票の記録に失敗しました。もう一度試してください。
違反を報告
レビュー を日本語に翻訳する

Andrew Gething
5つ星のうち3.0 Good day box set
2018年5月8日に英国でレビュー済み
Amazonで購入
Haven’t watched this yet but just received in the post.. the two discs this one and die hard 4 have clearly come from a box set and sold individually. Despite the packaging saying not for individual resale. See photos as proof..
続きを読む

JJ
5つ星のうち3.0 It's ok
2015年4月16日に英国でレビュー済み
Amazonで購入
This is possibly a Die Hard film too far but it whiles away a boring, nothing on TV evening.
Why do these films always start off with a wife in tow but somewhere along the line she will have disappeared? She was always a side line anyway but how much more interesting if the 'hero' actually managed to hold on to her. I mean the kids turn up on a regular basis, as they do here, but who knows where the mother/wife has got to in all their back stories.
Anyway, if you've watched any of the other Die Hards you will know they premise. Not as good as the first two.

carl blanchard
5つ星のうち2.0 One too many films in the franchise.
2015年9月8日に英国でレビュー済み
Amazonで購入
I enjoyed the original trilogy and even the fourth film too (despite the villain being a bit dull). This is just a bit naff. I found it difficult to care about the story or the characters in it and I barely recall the plot, weeks after watching it. I think the Die Hard franchise just died.
続きを読む
役に立った
フィードバックを送信中...
フィードバックをお寄せいただきありがとうございます。
申し訳ありませんが、お客様の投票の記録に失敗しました。もう一度試してください。
違反を報告
レビュー を日本語に翻訳する