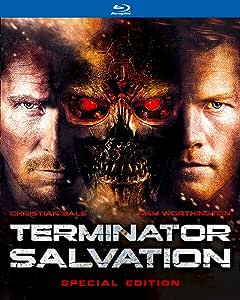 Albatross
5つ星のうち3.0 Could have been so good
2017年12月11日に英国でレビュー済み
Amazonで購入
Ever since Kyle Reece explained to Sarah Connor what the future would look like when the machines ruled the Earth, Terminator fans have been desperate to see more of those dark, gritty, laser-filled scenes that James Cameron dropped into the first two movies. Now, we finally get to see a whole movie showing us what the future world would look like. And it basically looks about as much as James Cameron’s original vision as Christian Bale looks like Edward Furlong, not bothering to retain either the look or feel of what has gone before.

‘Terminator: Salvation’ is the film that fans asked for, but didn’t ask for the way they got it. While it was made, the Terminator himself was busy running the state of California, so couldn’t really reprise his role (and don’t get me started on any CGI work used to correct this – it really isn’t up to the ‘Rogue One’ standards we’re now used to). However, that’s not so bad, as the story isn’t just about the indestructible machine of metal, but also the Connor family, so most people were relieved that a decent actor like Christian Bale was going to be playing John Connor. Unfortunately, the film takes the weird route not to follow him, instead choosing to be mainly about Sam Worthington’s character – a death-row inmate who somehow wakes up in the future and also helps trash a cyborg or two. I won’t spoil too much of Worthington’s character, especially as the trailer basically did that for me. However, I will say that this film would have been a damn sight better if it simply omitted his character completely. I’m not having a go at the actor. He did all he could with what he was given. It’s just people weren’t going to watch this film based on ANY new character – they wanted to see more of the old ones (even if they had been recast!).

I could pick out various personal annoyances that I had with this film – the helicopter pilot who wears sunglasses at night, the silent child who’s used as a plot device to show how caring our central characters are, or the fact that the end battle completely rips off T2 beat for beat. All of these I could have overlooked if it wasn’t for the fact that ‘Salvation’ completely ignores various plot points that have been clearly stated in previous films. Maybe those not so ‘up# on Terminator lore won’t notice, but for me I found myself asking too many questions as to why things were happening this way. I know you could say that timelines got changed here and there so things are now different in the future, but, in my opinion, that’s just lazy writing and a cop out.

There were at least a couple of stand-outs, namely Ashton Yelchen’s excellent take on how Michael Biehn portrayed Reece, Skynet City looking pretty cool and the nod to T” by playing Guns and Roses again. However, this film was almost damned before it was released as much of the publicity surrounding it was directed at Christian Bale’s bizarre outburst on set at a fellow crew member.

I guess that ‘Terminator: Salvation’ isn’t as bad as I’m making out. It’s an okay sci-fi/action film. However, because it has the Terminator name attached we – the fans – are just hoping for more than we got. And, if you’re interested, you may want to Google it’s alternate ending, as it is much darker and interesting than what we got.
続きを読む
10人のお客様がこれが役に立ったと考えています
違反を報告
レビュー を日本語に翻訳する

Elodie C
5つ星のうち1.0 Inferior quality goods
2020年7月3日に英国でレビュー済み
Amazonで購入
I contacted this seller to tell them that the dvd was faulty and would not play on two different computer dvd players. I couldn't send it back because I was shielding so haven't been outside of the house. This seller told me they would send me another dvd as a replacement and that I didn't need to send the rubbish one back, but not to write them an unhelpful review. However, the second one has never shown up so this is my review and it's unfavourable because I don't like being lied to.
続きを読む
違反を報告
レビュー を日本語に翻訳する

FeedMyReads
5つ星のうち3.0 Another film in the franchise...a little weaker than the previous ones
2019年8月11日に英国でレビュー済み
Amazonで購入
The Terminator franchise is often seen as one that has not quite delivered on the potential it has but for me the franchise is one of the better action ones out there. This film is one I really had high hopes for and felt was OK but just didn't quite live up to the previous offerings. Still worth a watch but hopefully the next one can bring things back on track.
続きを読む
1人のお客様がこれが役に立ったと考えています
違反を報告
レビュー を日本語に翻訳する

@Dangle9000
5つ星のうち4.0 "Wanna know the difference between us and the machines? We bury our dead."
2010年4月29日に英国でレビュー済み
Amazonで購入
Everything I'd heard about this film had been bad so I wasn't expecting much from it - but I was pleasantly surprised, it wasn't that bad at all, in fact it was pretty good!

The first Terminator film was an accomplished work of both action and science fiction, more surprisingly it generated a sequel which was also a high calibre film which impressed on all levels. A third film some years later fell a bit flat and this movie was quite literally a salvation of the Terminator franchise, and I think it succeeded. It's not as cerebral as the first two films with their mind-bending tackling of time travel but it's certainly not a brain-dead action flick. It ties in nicely with its predecessors to create a comfortable cycle of films.

Set in the dystopian future hinted at previously and dealing with an adult John Connor trying to save the young man who would eventually become his dad, we see the hardships of life in a world in the iron grip of the Skynet organisation. The film is essentially a struggle for survival, but instead of fighting against a single cyborg there's a less identifiable baddie as both civilians and the resistance movement attempt to either evade or infiltrate the robot governed system. The film is probably guilty of focusing on action effects at the expense of building genuine suspense, but unlike the CGI saturated blockbusters like Transformers, the action somehow seems more real. The film has a greyish tint to it which saps colour to give it a unique look which adds to the futuristic feel and enhances the gritty urban visuals of a civilisation destroyed during Judgement Day. The CGI blends seamlessly with the live action so that it doesn't look too polished or over-produced.

Though I like Christian Bale, he is hardly the life and soul of the film, thankfully Sam Worthington injects some life and teen actor Anton Yelchin ensures there's a strong enough human element to balance plight of humanity against the machines. I was absolutely convinced that he was the same character from the 1984 film which started it all.

In a nutshell: It doesn't do anything new, but it still does it well and it benefits from the pedigree of being a sequel to two of the best film of the last 25 years - this makes it a worthy watch. If this were a standalone film then it would struggle to be anything better than average, but it's part of something cemented into modern culture and makes various nods to it's history - after all, what better a phrase for the adult John Conner to say when leaving to battle other than "I'll be back"?
続きを読む
2人のお客様がこれが役に立ったと考えています
違反を報告
レビュー を日本語に翻訳する

"mark_lacy73"
5つ星のうち5.0 Great movie with a working UV code
2019年11月5日に英国でレビュー済み
Amazonで購入
Great movie that I could watch alot. Good actor in the film Christian Bale who plays Batman in the dark knight trilogy.
Great story to the film and good special affects through out.
SPOILER ALERT don’t read on here.
The man who I forgot his name work with Christian bale is actually a robot........
It had a good working UV code which was a bit tricky to redeem onto my Google Play collection instead of Flixster since it shut down. I would defently recamend I to you to watch and get the 2013 version not the 2009 version because the 2013 version has a Uv code and the other one doesn’t. It also came with direction’s cut in the 2013 version.
続きを読む