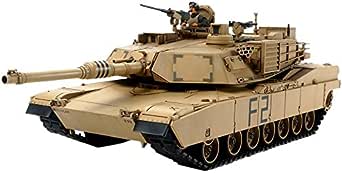 Mr GTS
5つ星のうち3.0 Not one of Tamiya's greatest hits in 1:48
2019年12月18日に英国でレビュー済み
色: アメリカ軍 M1A2 エイブラムス戦車Amazonで購入
Firstly, this is a model kit in 1:48 scale, so the reviews you're seeing, making reference to lots of small parts and unsuitability for six years old, aren't exactly relevant. This kit requires a reasonable level of modelling skills to assemble and a small collection of appropriate tools for that matter... so now I've got that out of the way... fit is OK, but it doesn't snap together quite as well as many of the newer Tamiya kits. Talking of which, detail wise, it's just about adequate for this scale - although there's a gaping inaccuracy where the gun mantlet's top shield doesn't reach to the main body of the turret. This has to be a design flaw and you'd think Tamiya wouldn't make mistakes like that, but they have. Another area for concern is poor fit of the fume extractor on the barrel; I needed to do a little filling and sanding to remove the seem line. The barrel itself is side moulded, but is a fairly flimsy affair. Tracks are decent and nice to see they're moulded and not belt type tracks. There's no photo etch included for the rear storage area, so I had to use a Haulier phot etch kit for that, which also allowed me to add a lot more detail to the model. But that is my biggest gripe, the lack of detail. I know Tamiya kits are always a halfway house in that respect, i.e. easy to build and with a smaller part count, but this kit really needs more parts and hence, more detail. So, 3 stars... I ended up painting mine in the 3 tone camouflage scheme, that many of these tanks were re-painted in after service in sandier terrain. I felt that was at least one of way of adding more interest to the model, rather than airbrush it in a uniform sand colour, after a lot of pre-shading. Then a bit of light weathering after that and the finished model does actually look very good. Just a shame it couldn't have been better straight out of the box and the detail error I mentioned does annoy a bit.
続きを読む
違反を報告
レビュー を日本語に翻訳する