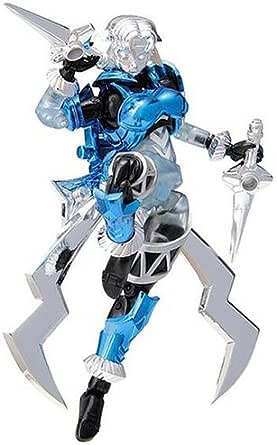 Spellvexit
5つ星のうち2.0 Tiny and temperamental
2015年8月28日にアメリカ合衆国でレビュー済み
Amazonで購入
I'd been ogling this figure for a while and finally purchased it. The experience has been underwhelming.

1. The figure is tiny given the price paid. With the name "Microsister," I should have known better, and a little research on my part would have helped. I don't fault the product for its size, but potential buyers should be aware that the cool pictures you see for the figure are extreme closeups.

2. So many pieces! I see this a lot in Japanese figures. The more accessories/pieces it has, the less interested I typically become. It makes for some interesting backpack/weapon combinations, however.

3. The rickety chestplate and backplate ruin it for me. For a while I couldn't even determine how her central armor even stayed on, and the only guidance I had to go on were the super-slick pictures of her in various badass poses on the card. Unless I'm doing it wrong, it seems that the breastplate, collar, and backplate are to be assembled on her at the same time -- then they stay on through some friction and force of will. There's a peg in the back that should secure the backplate, but it's temperamental, and if you want to attach anything to the back, it becomes almost unmanageable, falling off with a tinny clatter whenever I try to pose her.

Perhaps I got a lemon, but I was disappointed by this purchase. It seems to be meant to put in one pose, placed in a display case away from vibrations and breezes, and never touched again. I won't be buying any more in this line.
続きを読む
役に立った
フィードバックを送信中...
フィードバックをお寄せいただきありがとうございます。
申し訳ありませんが、お客様の投票の記録に失敗しました。もう一度試してください。
違反を報告
レビュー を日本語に翻訳する