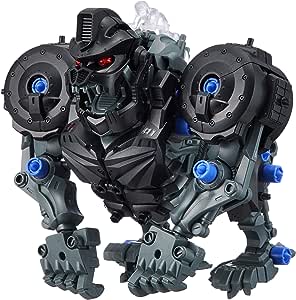 SarahMS
5つ星のうち4.0 The best robot gorilla I own
2019年4月11日にアメリカ合衆国でレビュー済み
Amazonで購入
I enjoy the manual/packaging for these, which shows an aerial "satellite picture" of the Zoid caught on film. That touch gives them some context. Visually, this guy is screaming for some more details. Unless you have amazing lighting, Knuckle Cong Is all black and dark grey, so it's a little hard to display. If you put it on a shelf, it's either looking kinda down or up in the 2 positions, it doesn't really have just a normal position. The stickers help, but I feel like some silver accents or customization would be needed to make it look better.

Looks aren't everything, so let's look at the functionality. The mechanics of the movement are brilliant, especially considering how they start out, just a motor and 2 spinning things. Out of the 2 different positions you can put it in, you get 2 very different movements. It can walk on all fours, and if you stand it up and do some transformations, it looks like it's roaring and beating its chest! It doesn't actually beat its chest, its hands stop some distance away, but the gesture is pretty convincing. Sometimes the lower jaw gets stuck, which kind of just fits over the skeleton on hinges, but who cares?

balance is the biggest issue I think. It's very top-heavy, and the feet kind of form a small foundation and it's easy to tip over in the walking mode. The standing mode is much more stable. If you like to turn them on and have them run into each other, Knuckle will lose every time.
続きを読む
役に立った
フィードバックを送信中...
フィードバックをお寄せいただきありがとうございます。
申し訳ありませんが、お客様の投票の記録に失敗しました。もう一度試してください。
違反を報告
レビュー を日本語に翻訳する