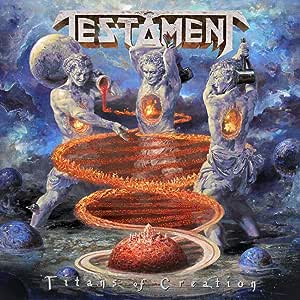 M. Shuttleworth
5つ星のうち5.0 Awesome sound! Huge.
2020年10月23日に英国でレビュー済み
Amazonで購入
Testament - the fifth of the 'Big four'. Back in the second half of the 80's I loved these guys, The New Order is still a must have thrash album from that era -along with 'Practice..' 'Ritual' etc. Alex's 'wanderings' and the Grunge era did have some impact on their sound in the 90's and I lost touch until recent years when I stumbled across the Formation of Damnation and thought it pretty damn good. Released earlier this year I ordered 'Titans' a couple of months back and patiently waited for the CD. OMG this album is amazing! Well crafted songs, Brutal and technical riffs, massive bass and drum beat, and Chuck has never sounded better. This is mature experienced songwriting but having lost non of that 'in- your-face immediacy. Seriously, it felt like I was hearing them for the first time again, but where those 80's thrash albums could sound sharp and high end, modern production techniques have produced an incredibly clean but huge almost live sound. Testament haven't lost any of their potency it seems - unlike some others! This is quality thrash even after nearly 40 years, can you believe it? Stand out tracks have to be City of Angels with the Sabbathesque intro riff and the awesome 'Symptoms'. Check out the animated video for 'Children of the next level' too. Last word goes to Chuck Billy, he has never sounded better, absolutely amazing vocals, I remember thinking the same thing about Rob Halford a couple of years back when I heard Firepower, after all these years these guys are just getting better, God knows what we're in for in the future but I can't wait. Just proves Metal will never die, because me and people like me will never get tired of hearing music like this \m/.
続きを読む
5人のお客様がこれが役に立ったと考えています
違反を報告
レビュー を日本語に翻訳する

S. Lornie
5つ星のうち5.0 A fine improvement on the last album!
2020年8月21日に英国でレビュー済み
Amazonで購入
Titans of Creation is the thirteenth studio album from Testament. The follow up to the enjoyable Brotherhood of the Snake was released in late April of 2020. The album was released after the group (with Exodus and Death Angel) successfully toured the album through out Europe. A show which was nothing short of excellent.

It's with no surprise whatsoever that Testament have recorded another album. They appear to be like metal legends Saxon in that they know perfectly well how to utilise their strengths to record an album and will do so as frequently as possible. Granted, the previous album had some seriously wonky lyrics and this one has its moments. But musically, this a very sound record.

The rhythm section of the album is where the quality is. Through out the album, Eric Peterson churns out some great riffs whilst Steve Di Giorgio and Gene Hoglan bash out some incredible rhythms. Alex Skolnick of course plays some great lead and rhythm. Picking tracks out on this record is a little hard, at least for me. A lot of it works well as a whole and feels a bit odd as a single track. I really like the heavy sound on Night of the Witch, The Healers and the frantic pacing of WWIII. Fans will notice that the band have opted to weave some of that death metal riffing into their music. They do this now and again but it's very prominent here. It gives Chuck Billy the ability to switch out vocal styles here and there. You'll hear his classic '80s wail, some more gruff shouting and even some cookie monster death vocals. It sounds really good and will please fans who like it nice and heavy.

The production and engineering is a bit off. I think the album has been slightly over produced. All the instruments have great tones but it has all been cranked up a bit too loud. It's quite literally vibrating the speakers to the point I can hear them vibrate. It's definitely a casualty of the loudness war, something I wish metal bands would get over already. I don't think many fans care about this and that's why they keep doing it.

Other than that, it's really hard to criticise an album like Titans of Creation. It's very well put together. There isn't a bad song here and the musicians involved all sound fantastic. It's a definite pick up for thrash metal fans.

Jane Aland
5つ星のうち4.0 Essential thrash
2020年7月27日に英国でレビュー済み
Amazonで購入
It's great to see one of the old-school thrash bands still being this aggressive, with this album more than matching anything being produced by younger bands today. The production sounds absolutely crushing, and the riffs are juicy enough to match, plus oodles of shredding solos. If I have one slight quibble, it's that the song-writing quality slightly dips in the second half of the album - the songs are still solid, but the front half is loaded with all the best tracks - the first five tracks are pretty much flawless, so the album starts on a massive high, then slightly flatlines towards the finish line. But this is a minor quibble - if you like thrash metal, this is essential.
続きを読む
3人のお客様がこれが役に立ったと考えています
違反を報告
レビュー を日本語に翻訳する

Chris
5つ星のうち5.0 Relentless Thrash - from a consistently amazing band.
2020年6月23日に英国でレビュー済み
Amazonで購入
Such a great album. I purchased the dbl LP set. TESTAMENT are a band I have followed since the 80's, and seen many times live over the years. Yes - a few albums released have not quite hit the spot, but never really a bad album (Low / Demonic...). This new release and the few put out prior - blimey.... Dark Roots really blew me away... and this one. Love it. There are a few bands that still slay live and consistently put out scorching albums, TESTAMENT / OVERKILL / EXODUS... Yet the 'bigger' named bands put great stuff out - but always tend to lack true ferocity of what it meant to be thrash. Anyway..... buy.Its a true stonker...
続きを読む
3人のお客様がこれが役に立ったと考えています
違反を報告
レビュー を日本語に翻訳する

Darren Diggle
5つ星のうち5.0 The Mighty Testament
2020年4月17日に英国でレビュー済み
Amazonで購入
CD got to me in excellent conduction. A little over the release date, but well worth the wait. Hints of the old Testament and some more of the same from the last two albums. This album will without any doubt go down well Live. A most have album for all of you Testament fans. Album of the year so far.
続きを読む
2人のお客様がこれが役に立ったと考えています
違反を報告
レビュー を日本語に翻訳する
すべてのレビューを参照します
トップへ戻る
Amazonについて
Amazonでビジネス
Amazonでのお支払い
ヘルプ＆ガイド
日本語ショッピングのための言語を選択します。 日本ショッピングのための国/地域を選択します。
© 1996-2020, Amazon.com, Inc. or its affiliates