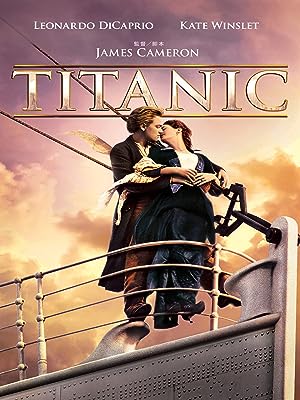 KATHARINE BISSET
5つ星のうち5.0 Still Brilliant!
2018年7月17日に英国でレビュー済み
Amazonで購入
This is one of those Epic films I ha to buy again. I first saw it at the old ODEAN cinema when it first was shown and loved it and owned the VHS when they were around, 12.99!
Now I bought it again as I like watching the actual special effects, you don't seem to appreciate the efforts of making this film until you see it again. I admit, the love story between Jack and Rose (Leonardo dicaprio an Kate Winslet) still can get a tad irritating as the rest of the character. Not their fault as the film is mostly to do with the actual Iceberg incident.
I hadn't realised how cheesy the storylines were even though with a good cast like Billy Zane (played a American medic in Memphis Belle very good film) and found odd how bad an ass he was he didn't die, unlike poor Jack who freezes to death at the very end, making sure that Rose survives by floating on a raft. I have to admit the efforts made into this film are very good even though it is an old film now. The only odd thing about the ship itself, how come nobody claimed to say 'ANYONE ELSE SUFFER SEA SICKNESS?? I know I do!
There are no real extras on this copy of the DVD there is a special edition which is a bit more money only this is worth keeping.
There are delete scenes on the other special edition DVD and a scene that would have been good included the Captain of the Titanic shouting back for some of the boats to return but none did, very sad really as so many lives could have been saved. I have no idea how I would have handled being in such a terrifying position. When water invades anything it destroys things so quickly and yes, we were led to believe that Titanic was indeed 'unsinkable' but alas she did, not before splitting in half.
If you haven't see this then it's good just for special effects but like me, I just wanted to own the film so I could watch it without any annoying adverts you get on FilmFour.
続きを読む
11人のお客様がこれが役に立ったと考えています
違反を報告
レビュー を日本語に翻訳する

rob stirling
5つ星のうち5.0 One to keep or give as a gift.
2020年4月29日に英国でレビュー済み
Amazonで購入
Review on the 4 disc Deluxe Collector's Edition (DVD).
The film transfer is digitally mastered for picture and sound, and is astounding even allowing for the fact that it was made in the modern era --- dare I say that this is one of the few films that will look better on Blu-ray as I've found that many are only marginally better or sometimes even poorer ?
Disc 1 has 103 minutes of the film plus bonus features, disc 2 has the balance of the film, 83 minutes, and more bonus features including a music video, Celine Dion's 'My Heart Will Go On'.
Disc 3 & 4 have even further bonus features including deleted scenes, 'Titanic' parodies, visual effects, production featurettes etc.

At the heart of the film are audio commentaries by James Cameron and dozens of cast and crew which can be played over the film. For an enthusiast of the film this box set is perfect, and I did buy more than one set to give to such enthusiasts, very gratefully received if I can say so myself.

P. White
5つ星のうち5.0 3D is superb!
2017年5月8日に英国でレビュー済み
Amazonで購入
I've seen this film:
In the 2d cinema.
On VHS.
On DVD.
On 2d blu-ray.
On 3d blu-ray.
The 3d version is by far best and the post-conversion quality is utterly astonishing. I defy anyone to not think this is native 3d ... the processing power required to achieve the perfect 3rd dimension is mind-blowing!
If you have a 3d tv (especially an oled) and have any regard for this film then buy this 3d version.
続きを読む
9人のお客様がこれが役に立ったと考えています
違反を報告
レビュー を日本語に翻訳する

shadowspirit
5つ星のうち5.0 Titanic collector's edition in 3d. Brilliant experience must say would recommend if you are a fan of the film.
2017年7月30日に英国でレビュー済み
Amazonで購入
Very great film as everyone knows. Most particularly brilliant experience to watch in HD as well. However this takes your experience to the next level because you can watch it all in 3d which is awesome. If you course you are into that kind of thing and also have all the necessary tech to go with that as well. But other than that this product I would recommend if you are a fan of the film as it is worth it because not only does it have the film in 3d blu-ray form but also in the normal form as well which within being so is all upgraded within that for blu-ray in terms of performance and viewing as well. There are also some extras with that included. Commentaries and what have you. Including a titanic documentary which is fun to watch as well. Some deleted scenes are also provided. I have lots of editions of this film as well myself not only on blu-ray but on dvd included the expanded versions which I for one would also recommend but for anyone who loves the Titanic film and is into their blu-rays then this is one I would recommend for their memorabilia.
続きを読む
1人のお客様がこれが役に立ったと考えています
違反を報告
レビュー を日本語に翻訳する

Incontinentia Buttocks
5つ星のうち5.0 3D Bluray review = Amazing
2016年1月24日に英国でレビュー済み
Amazonで購入
First of all I love this film. I first saw it on VHS soon after it came out on that format. I was blown away then at the detail and visual effects. I had the dvd later, and in November I bought myself a long wished for film projector (HD and 3D compatible). Since my bluray player is 3D I decide to seek out a couple of 3D movies. I never was a fan of 3D really, I remember seeing Jaws 3 in 3D at the cinema in the 80s but by today's standards that was pretty laughable.
Anyway, in December I took my boy to see Star Wars the Force Awakens in 3D at the cinema. I loved the film but came away wishing we had only gone to the 2D showing. The only scenes worth seeing in 3D were the space scenes.
But after seeing Titanic 3D, I am absolutely blown away. The 3D aspect totally gives you an impression of the sheer size and height of the titanic which you don't get from the normal version. On the projector at 120" it was mind blowing. You feel like you are actually there. The bluray 2D version (included in this package) is also visually perfect. But I see why the 3D version is the benchmark film for all 3D films. Totally worth a watch. And a tip, go to "all new and used" to select the bluray new from amazon for £7.00 instead of the advertised £17.
続きを読む
3人のお客様がこれが役に立ったと考えています
違反を報告
レビュー を日本語に翻訳する
すべてのレビューを参照します
トップへ戻る
Amazonについて
Amazonでビジネス
Amazonでのお支払い
ヘルプ＆ガイド
日本語ショッピングのための言語を選択します。 日本ショッピングのための国/地域を選択します。
© 1996-2020, Amazon.com, Inc. or its affiliates