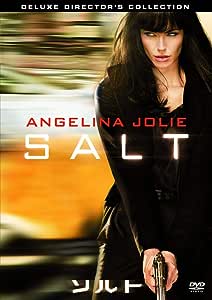 rob stirling
5つ星のうち5.0 Men get away with it.
2019年11月7日に英国でレビュー済み
Amazonで購入
Action all the way with this, but rather shallow and with unbelievable shoot-outs and car chases plus Angelina Jolie as the CIA heroine who is suspected of being a double agent. She is the action figure, almost cartoon-esque, and her stunt double really earned her money in this film.
It really is ridiculous plot wise and deserving of zero stars for the acting, especially from Liev Schreiber who plays his character as if he has a barge pole running through him which is most unusual as he uplifts most productions that he is in.
If this had a male central figure, such as Cruise or Arnie or any other, I would probably describe the film as another action fest that is entertaining and give it the average 3 stars or more. Why cant a woman be the same action heroine in a film full of amazing but absurd action that is mildly entertaining but will never win any Oscars for the acting ?

So I give it 5 stars, as this copy has 3 versions of the film : theatrical, director's and extended cuts. There are further bonus features including a radio interview with director Phillip Noyce. English subtitles with the film.
続きを読む
1人のお客様がこれが役に立ったと考えています
役に立った
フィードバックを送信中...
フィードバックをお寄せいただきありがとうございます。
申し訳ありませんが、お客様の投票の記録に失敗しました。もう一度試してください。
違反を報告
レビュー を日本語に翻訳する

FJY
5つ星のうち5.0 Action-Packed
2019年8月1日に英国でレビュー済み
Amazonで購入
I really enjoyed this film. The plot is rather convoluted, but it has plenty of action and is very entertaining. Angelina Jolie plays the lead role and the character is a kind of cross between Jason Bourne and James Bond, but without ripping either franchise off. I thought that it was a pity that there wasn't a sequel to this, but there you go. Five stars from me. Just switch your brain off, don't think too much about the plot and enjoy.
続きを読む
2人のお客様がこれが役に立ったと考えています
役に立った
フィードバックを送信中...
フィードバックをお寄せいただきありがとうございます。
申し訳ありませんが、お客様の投票の記録に失敗しました。もう一度試してください。
違反を報告
レビュー を日本語に翻訳する

Kevin S.
5つ星のうち3.0 Salt - DVD
2018年8月27日に英国でレビュー済み
Amazonで購入
I’d not seen this for a while but it’s a fun (if increasingly preposterous) spy-jinks thriller with Angelina Jolie giving it her all.

She plays Evelyn Salt, an intelligence officer accused of being a double agent poised to make a high level assassination attempt within the next few days. Protesting her innocence but with colleagues having to take the accusation seriously, she ends up on the run.

Director Phillip Noyce knows the territory well having directed a couple of the Jack Ryan films of the 1990’s, and he can handle the action well. The main problem is a script that after the halfway mark throws twist after twist into the story until it becomes a bit of a mess by the finale. But, Jolie never wavers or lets any of that get in the way of making you believe it’s all possible, and as she carries the film virtually solo, all credit to her for that!

cora
5つ星のうち2.0 DVD is perfect, film not to my taste
2020年1月28日に英国でレビュー済み
Amazonで購入
First off, the DVD is perfect. No complaints about it as a product. However, the film itself is not to my taste. I had heard much good about it, the cast sounded fantastic, and I was genuinely looking forward to seeing it. However, right from the get go I found it repulsive. The graphic torture of a female right at the beginning did not appeal. I didn't need to see it to believe it. And when it was followed soon after by the close up of a huge tarantula crawling over the screen, the disc went straight back into the box. I don't enjoy seeing this kind of thing, I didn't even want to find out if there was a point to what seemed like cheap shock value to me. It sat on the shelf for a while, waiting to maybe get watched at a later date but has since been donated to the nearest charity shop. First time I ever did that with a DVD I paid good money for.
続きを読む
役に立った
フィードバックを送信中...
フィードバックをお寄せいただきありがとうございます。
申し訳ありませんが、お客様の投票の記録に失敗しました。もう一度試してください。
違反を報告
レビュー を日本語に翻訳する