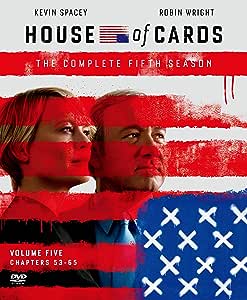 Mike S.
5つ星のうち5.0 A great season
2018年6月25日にアメリカ合衆国でレビュー済み
Amazonで購入
++++Warning, this will contain some spoilers from the prior seasons, but no major giveaways from season 5 ++++

This season is somewhat bittersweet. Sweet because it really returned the show to what made it great to begin with, the political maneuvering and backbiting on the part of really all the characters, but certainly centered around Frank and Claire. Bitter because the storyline the show was clearly setting up going into the sixth and final season had to be scrapped once word of Kevin Spacy's behavior got out and he was rightfully fired from the show.

The show was bringing some of the prior stories to a head, with the death of both Zoe and the disappearance of Rachel being investigated by Tom Hammerschidt. There are also clear parallels that the show was making to the modern day political climate from Russia causing problems, to an election with an outcome under scrutiny, to an investigation threatening to bring down a President. I will not say too much more to avoid spoiling it for people who have not seen it, but as with the prior seasons, it packs a lot into the limited amount of episodes. The writing and acting are very good, it was setting up a great story arc going into the final season. Obviously, a lot of that will have to be scrapped since not only a, but the main character is going to have to be written out of the show without ever appearing in it, so much of what happened this season may end up being totally irrelevant depending on how the writers pull that off.

For those who get the discs, the show looks and sounds great on blu-ray. As has been the case with the past couple seasons there are no extras at all, so the only reason to get the discs now is if you got the first couple seasons for the extras and you want them to complete your collection. Otherwise, you may as well just stream them. Also, they are still packaged in that horrible slipcase packaging that makes them very hard to get out and will definitely risk scratching DVDs. With the blu-ray discs, the anti-scratch coating should protect them.

C.J.
5つ星のうち3.0 If you're watching you know what you're getting, but this season... a lot of subplots
2018年9月18日にアメリカ合衆国でレビュー済み
Amazonで購入
Ok, we're going to ignore the Kevin Spacey issues. This is about the series. I've enjoyed the series since the first episode, and this season... this season has added so many subplots and opened up so many random doors that it is becoming far less believable than it has ever been. Yes, there is subterfuge in real life politics, but this season takes that to a whole new level. Previous seasons ... you could suspend disbelief enough, as it was almost all plausible. This season I feel borrowed too heavily from current political conspiracy, and dialed it all up to 11. It made it so you were definitely taken out of the "this could be real" mentality that the other seasons balanced so well. I am hoping that the 6th season reins it in a bit.
続きを読む
3人のお客様がこれが役に立ったと考えています
違反を報告
レビュー を日本語に翻訳する

Norman B. Tweed Jr.
5つ星のうち5.0 House of Cards is great in Blue Ray!
2018年1月17日にアメリカ合衆国でレビュー済み
Amazonで購入
If you live in a rural area, where Internet is slow, it is impossible to stream good movies. House of Cards was a wonderful series and this set of Blue Ray Discs made it very enjoyable.
続きを読む
1人のお客様がこれが役に立ったと考えています
違反を報告
レビュー を日本語に翻訳する