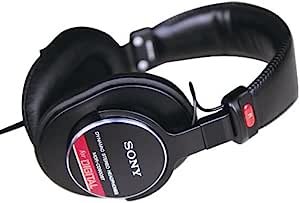 Amazonia
5つ星のうち5.0 legendary one
2019年9月26日にカナダでレビュー済み
Amazonで購入
Picked this one for modification, there are many possibility but the backbone of this pair is absolutely the crown jewel in the monitoring headphone's world, IMO.

Going for BTL + foldable mod soon. Would rather not adding plug on the shell as it's not designed to do so. And additional interface will certainly contaminate the signal stream so no.
続きを読む
1人のお客様がこれが役に立ったと考えています
違反を報告
レビュー を日本語に翻訳する

G. S.
5つ星のうち3.0 Can be a 5 star for some, but these headphones are not for everyone.
2018年2月19日にアメリカ合衆国でレビュー済み
Amazonで購入
This is actually a 5 star for me, but the reason why I'm giving this a 3 star is because one must really know it's pros and cons and for some, this headphone could turn out to be very disappointing unless you've heard these cans before and know what you're getting into. Also, mine came shipped with a missing screw and the seller couldn't send me just an extra screw so I had to buy some off ebay which was a bit annoying, so that depressing moment of mine also plays a role in my rating.

First off, these are monitoring headphones and not the audiophile listening headphones. I say this first because there are many who love these headphones and are on forums like head-fi who may have the tendency to praise these for what it's worth. And I have to agree to a certain extent, especially for the details these can retrieve but these are probably the most boring set of headphones I own and probably what I consider to be the most flat or neutral among my collection. I actually sold my Shure SHR840, Takstar Pro 82, & Tascam TH MX2 for these primarily because in other countries, the CD900ST is still commonly used, especially in Japan, and is a great way getting feedback on other products when comparing to the CD900 as a form of base sound. I do the same thing in the US but like to use the HD600/650 as base since more people have owned and or know the sound signature of those headphones more than anything else.

So more into the review: As mentioned above, one of the most boring headphones you can consider and is massively uncomfortable as well.

COMFORT: I can barely keep these on for 30 minutes before my ear lobes start to hurt and I think the max I've kept it on is about 2 hours. However, the build quality is pretty solid. My MDR7506 gets thrown around and crammed into many places and those survive well. These are pretty much the same thing except the headband is bent a little and doesn't collapse like the 7506 but build quality is identical and uses similar parts so I could easily swap parts between the two if I wanted to other than the cups. The ear pads are thin and there really isn't much padding on there at all. That said, of course I've experimented with different pads including the super cheap ebay Chinese replacement pads to Brainwavs budget pads and I've even tried more of the premium pads from Dekoni and couple of ZMF pads even though they don't fit but with a little double sided tape, it was manageable. Comfort goes up by orders of magnitude but no matter what I swapped it with, the sound (to me) changed so dramatically that I just doesn't have the CD900 sound anymore. This is sad because I love these headphones but in order to keep loving them, I also need to suffer the discomfort as well. The driver literally has to be pressed against your ear to keep the sound and as soon as it moves away, even by a couple of millimeters, the sound starts to change and with most aftermarket pads, the sound became very veiled and at times sounded hollow. For me, it's not worth the comfort in order to sacrifice the sound change.

IMAGING & SOUNDSTAGE: I don't know if this is a good thing or a bad thing. In some ways, the imaging is immaculate to where you can pinpoint exactly where the sound is coming from. But when comparing with some other headphones, the placement of each sound is off. Lets me see if I can explain this better. When listening to an orchestra play, I hear very clearly each instrument and pinpoint the sound well enough that depending on the recording, I can tell how many people are playing a specific instrument. However because the sound comes in very clearly, it messes with identifying the actual position of where it's coming from. The depth and soundstage gets kinda wacky which is why I said in the beginning that this is a good headphone for monitoring. When listening to some really good audiophile grade headphones like the HD800(s) or one of my current favorites, the Sonoma One, I can tell that the Violins are in front, behind them, closer to the middle are the flutes, and behind them I hear the clarinets playing and next to the clarinets, are the trombones. On the CD900, it sounds more like Violin on the far left, flutes are closer to the middle, the clarinet sounds like they are floating above flutes, and the trombone is slightly more to the right in line with the flutes. But when comparing with the HD650 for example, even though the location of instruments are more accurate on the 650, with the 900, I can tell that there are 4-5 people playing the flute while with the 650, it just sounds like a group of people. If you want better imaging (not really sound stage) and slightly more colored sound but still have similar performances of the CD900 where it shines, I will recommend the Phonon SMB-2 as a mighty alternative, although even that to me is still uncomfortable as hell.

FREQUENCY RANGES: I think one of the areas this headphone really shines is in the mids, vocals to be more precise. These days, most headphone manufacturers have a tendency to raise the lows and highs making the mids sound a bit recessed giving it what Tyll from Innerfidelity like to call the smiley face graph. These headphones are again more neutral or flat to me (btw, I've never seen a frequency response graph for the CD900 so I can't say for sure how flat it is but compared to the rest of my collection is how I feel) so it does sound like the vocals come life a lot more. Dare I say it's almost as detailed as the Focal Utopia? Maybe. definitely not as lush sounding as the Utopia but for a fraction of the price of many audiophile level headphones, I think the mids and vocals sound just superb. That said, these don't really have much extension in the sub bass if at all and I have feeling things start to drop off beyond 4-8kHz but is still more than enough for listening to the details of the percussions.

It still amazes me that these headphones which have been around for a very long time, almost as old as I am, and is still being produced today IN JAPAN and is widely used due to the extremely detailed sound it offers. So hopefully if any reader has read this far, you have a better understanding what these headphones should be used for. I'm hoping the 3 star rating will catch someone's eye as I think it might be the only 3 star at the moment. Also If you ever see some Asian dude with these listening to DAPs, Amps and DAC's at places like CanJam, there's a pretty high possibility that would be me since all the CanJam's I've been to so far, I have yet to see one person sporting the 900's. - Cheers!
続きを読む
43人のお客様がこれが役に立ったと考えています
違反を報告
レビュー を日本語に翻訳する
すべてのレビューを参照します
同様の商品をご覧になりませんか？ こちらのリンクで参照ください。sony ハイレゾ、sony a、ソニー sony、レビュー高評価商品 モニターヘッドホン
トップへ戻る
Amazonについて
Amazonでビジネス
Amazonでのお支払い
ヘルプ＆ガイド
日本語ショッピングのための言語を選択します。 日本ショッピングのための国/地域を選択します。
© 1996-2020, Amazon.com, Inc. or its affiliates