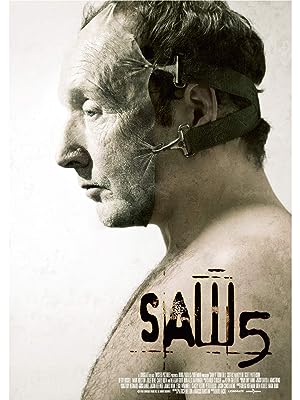 Against the odds and all known laws of the universe, the Saw franchise somehow keeps its head above the water and retains the bulk of its gruesome charm and best qualities as it returns for a FIFTH film in the series.

I can't think of another horror franchise that didn't turn to absolute trash by the third sequel at the very best. Most lose any of their redeeming features by the end of the first sequel, but Saw has somehow remained interesting (even if not always surprising throughout) as the overall story continues to develop with new revelations amongst the familiar structure of psychological tinged traps and victims but has to continuously find new ways of presenting the overall narrative which is part of what keeps it interesting.

This time Hoffman picks up the baton to continue the story from Saw 4 and as well as the much expected gore and guts there are a few surprises too! If you've enjoyed the series so far I think you will definitely enjoy this entry, and if you haven't seen the other films then it's probably worth starting from the beginning as the overall story that continues from film to film adds an extra depth that keeps the films from just being death-traps-by-numbers.
続きを読む
役に立った
フィードバックを送信中...
フィードバックをお寄せいただきありがとうございます。
申し訳ありませんが、お客様の投票の記録に失敗しました。もう一度試してください。
違反を報告
レビュー を日本語に翻訳する

Wavey Davey
5つ星のうち5.0 The Saw franchise continues to deliver narrative tension, stomach churning visuals and keeps on keeping the sequels watchable!
2017年3月27日に英国でレビュー済み
Amazonで購入
Most films, of any genre but *especially* horror, tend to have run the course (an understatement if ever) by the sequel. Has anyone actually watched Nightmare on Elm Street 2,3,4,5,6,7 (I can't recall how many there were) without doing a Johnny Rotten 'ever felt you've been cheated?'

Saw, somehow, bucks the trend. I started watching the series again as my partner had managed to avoid them entirely as she's not a hack and slash fan. That said, neither am I, and I persuaded here that there is far more to Saw than gore. There's the narrative, which is very cleverly dragged to and fro between the movies. There's the characterisation which does allow you to invest in more than just the killer.

[SPOILER ALERT] That said, Saw V builds on the Jigsaw back story that unfolded in Saw IV, and focuses on the relationship between Jigsaw and his accomplice Detective Hoffman.

Another excellent movie, well written, well acted, well directed and well produced. At just a penny a pop (plus a rather steep £1 postage on each DVD) Saw is the movie that can survive being sequeled and then some...

Flinch
5つ星のうち5.0 Without a doubt, one of the best.
2009年4月27日に英国でレビュー済み
Amazonで購入
If you are a fan of horror and of the SAW franchise, then there is no reason not to own this. A credit to the existing series of films, this latest addition does not disappoint.

Following on from the forth SAW film, the film opens with a bang and within minutes has your gripped to your seat. This is vastly down to the expert job with special effects, which (at points) has you staring at your screen in disbelief as is the extent to how realistic this film is.

The story-line, without giving anything away, is world-class. But requires the viewer to have watched the previous installments to make head-or-tail of it. Those aware of the previous four, will see the genius behind the script and story, which begins to answer all the un-answered questions. And ends in saw-tradition in a climactic way. It also, however, opens many more questions leading to a sequel.

The acting is also superb, brining back all the old characters, as well as introducing new saw-victims, who must endure yet another hair-raising, an often sickening experience to survive.

In high-definition the film is truly brought to life and is a brilliant experience to watch. Special features are some what basic, but has in-depth featurettes of all the challenges and traps within the movie.

All-in-all a brilliant purchase. One which the small review, barely begins to capture.

Alexander House
5つ星のうち4.0 My second favorite Saw
2011年3月1日に英国でレビュー済み
Amazonで購入
This is my second favorite Saw movie. The first being number 2.
I love how they all start together and in the end there's only two and they realize they could have gotten there all together and only cut little bits of their hands to fill the glass as opposed to half their forearms.
The story line is starting to get a bit depressing and all, and I can see why they decided to stop at 7, as there were more Saw movies planned, but it is definitely greatly enjoyable. I do recommend this movie for a thrilling night out with friends or couples, but I wouldn't go out of my way to recommend either 6, 7 or even the original for example.
続きを読む
役に立った
フィードバックを送信中...
フィードバックをお寄せいただきありがとうございます。
申し訳ありませんが、お客様の投票の記録に失敗しました。もう一度試してください。
違反を報告
レビュー を日本語に翻訳する