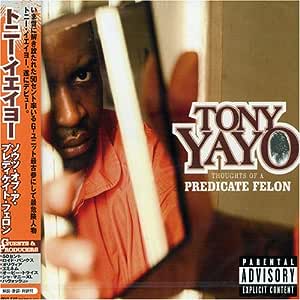 Matthew Robinson
5つ星のうち3.0 Thoughts of a Predicate Felon was a decent album, and it actually still stands up 14-years later.
2019年2月13日 - (Amazon.com)
Amazonで購入
I remember back in the 2003 to 2004 period, one of the biggest storylines in rap was when was Tony Yayo getting out of jail. Then another big storyline in rap was when would Yayo release his first album on G-Unit and Interscope Records.

Well, the calendar flipped to August 30, 2005, which was the day Thoughts of a Predicate Felon was released to the public. Oh yeah, by the time that date came Yayo was also free from the confines of prison life.

To tell you the truth back when this album came out (and even to this day), this album had a ton of haters who trashed this album and Yayo's rhyme skills.

In my opinion, Yayo wasn't and isn't a big-time lyricist, but there were a grip of songs on this joint that showed that the man has solid rhyme skills.

Instead of listening to haters or people who didn't come of age when G-Unit was hype, buy this album yourself and judge for yourself if this album is worth your time.

At the end of the day, Thoughts of a Predicate Felon was a decent album, nothing special. But there are some songs on this album that will surprise you about Yayo's rhyme skills.

Chandler
5つ星のうち4.0 Its all good
2005年10月16日 - (Amazon.com)
I don't know why people are hating this album. It got good reviews from the XXL and the Vibe. Don't read the source, because the only reason they gave him 2.5 mics is because the beef between G unit and Benzino and the fact that G UNOT is on the covor. It's not a classic, but its better than a lot of albums I've heard this year. I'm not a G unit fan (techinally I hate 50 cent). So I reviewed it by every song:

1.Intro- (It's sort of like Ice Cube's Intro on The Preditor, except hes in jail)

2.Homicide 5/5- Yayo spits real hard. One of the best tracks on the album

3.It Is What It Is 5/5- The hook is sick and Yayo and Spider Loc's verses are nice

4.Tattle Teller- 2/5- Throw away track. Very childish like hes in the first grade. Beat is garbage too. The outro when Fat Joe's name comes up maybe the only part of the song looking foward to listening to

7. Drama Setter- 5/5- Eminem's beat and hooks are real nice. Yayo and Obie Trice do a good job spitting on each verse also. Should have been second single in my opinion.

10. Curious- 5/5- Other half of the second single. Yayo's verses are good, and Joe's singing laces the track. This couldn't go wrong as a single.

12. Love My Style- 4/5- Borrows Britney Spears' song "Toxic" and turns it into another dance song. Hook is nice. Verses could have used a little work though.

13. Project Princess- 4/5- I don't like the way Yayo raps in this song. The beat and Jagged Edge's singing makes it a nice song though.

15. I Know You Don't Love Me- 4/5- I thought it was funny that 50's hooks mention almost every popular rap and r&b artist. Then some of yall let the part "Try to run Game on me, you punk bitch" fly over your head. Yayo's verse was not all that good. Young Buck and Lloyd Banks were nice. And that humorous hook that 50 Cent changes up each time between the verses makes the song worth listing to.

16. Dear Suzie- 2/5- Beat sounds a little annoying when it gets to the second verse. Yayo's hook is okay, but his verses are terrible. Another throw away track if you ask me.

17. Live By The Gun- 5/5- This song was one of the anticipated tracks (and probably is an unlisted bonus track) because it came out the same time 50 Cent and Yayo's song "I Run New York" came out in mid spring '05. Dark type of beat. I think it's a rememberable hook. Another good song to finish out the album positive.

I think this is an album worth getting. People should stop hating on Tony Yayo because he's supposedly soft in G-unit. Tracks on this album proves that he's not. Go cop the album, because it's worth the money.

Pablo
5つ星のうち2.0 Eh..
2006年10月21日 - (Amazon.com)
I'm not the biggest fan of G-Unit, but I admittedly own every album that's come from the camp, no matter how subpar it is. This maybe the weakest G-Unit album released; and it's sad, because I actually find Yayo to be an entertaining rapper. When I say entertaining, I don't neccessarily mean good; I've just come to expect some decent rhymes from Yayo about chopping coke(his favorite subject) over dope beats, courtesy of some worldclass beatsmiths. Didn't really get that on this release, but it isn't completely horrible.

Yayo has some interesting concepts from time to time; I remember the first time I truly enjoyed a verse by Banks was his guest spot on Young Buck's "Bonafide Hustler," where he sang about moving cocaine in form of "Mama's Gonna Buy You A Mockingbird." It honestly left me in stitches the first time I heard it; but its absurdity actually made me intrigued. I'd never been too big on Yayo before that track, but it showed me while he is by no means above average, his unique rhyming style could make him just as respectable as his G-Unit cohorts(be that a good thing or a bad thing, you decide).

There are some nice, and raw beats found on this album; probably the grimiest release from the G-Unit camp behind Buck's Welcome To Cashville. "G-S***" has a nice beat, as well as some singing from Yayo(unintentionally hilarious, but hey, it's good for a laugh), Drama Setter(maybe the best track on the album, featuring hook/production from Eminem and a verse by Obie), "Love My Style," which features the same sample used in Britney Spears' "Toxic"(and, at least for this head, to a much better effect), as well as "Homicide," "So Seductive," and "Live By The Gun." Unfortunately for Yayo, most of these tracks only pass because of production; while his voice and flow are both appealing to me, and some of the unintentional humor he injects by singing at random points are highlights on the verbal side, his lyrics are mundane at best. While most members of G-Unit find new ways to talk about the same old things(money, weed, women), Yayo is just really bland lyrically.

This ties with The Massacre as the worst G-Unit effort; and possibly ranks behind The Massacre simply because that at least had a somewhat cohesive feel. This feels more like a mixtape than an album at times, which is never good for a major label release. Poor, but worth listening to if you're a fan of Yayo or the Unit; otherwise, i'd avoid this release at all costs.
続きを読む
レビュー を日本語に翻訳する
Amazon.comのカスタマーレビューを見る(195) 5つ星のうち2.6
Amazonプライム会員ならお急ぎ便、日時指定便が使い放題
さらに、映画もTV番組も見放題。200万曲が聴き放題 。クラウドに好きなだけ写真も保存可能。
> プライムを無料で試す