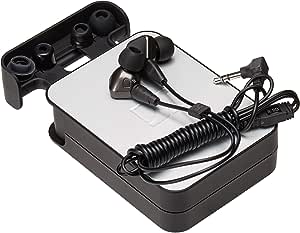 Praveen
5つ星のうち1.0 Received Fake Sennheiser IE80 - Getting refunded
2018年3月13日にインドでレビュー済み
Amazonで購入
Firstly, I would like to blame Sennheiser India for this mess. They had a responsive customer care 10 years ago in 2008 when I bought a few high End Sennheiser earphones from them, the last being CX6 Travel model earphones I bought in 2009. I lost it a month ago after 9 years of solid service, fantastic earphones.

I wanted to upgrade to IE80 and contacted Sennheiser India but no one answers their customer service number. Been trying since Feb 2018 and everyday, including today, I keep getting an automated voice reply stating all their executives are busy and after disconnecting the call, I promptly receive an SMS saying I contacted Sennheiser.

Seems like this company has shut operations in India. None of the so called Authorized dealers in Bangalore stock the IE80 nor are they interested in getting it for you. Every single one of them is not interested in selling Sennheiser products, I had to call 6 dealerships everyday for a week and beg like a slave before giving up.

Every Sennheiser product sold outside of the few dealerships in India is fake. 100%.

If you did not buy it from a Sennheiser authorized dealer, you bought a fake, don't even bother thinking you are the lucky one who didn't. Sennheiser is among the most faked earphones on Earth along with Bose.

With Sennheiser India being a literally dead organization and the entire Sennheiser India dealership network in Bangalore having ZERO interest in Sennheiser products - I realized the only way to get me an IE80 was from abroad.

Sennheiser official sites outside India don't ship to India and definitely I was not going to spend lacs to travel abroad to get a couple ten thousand bucks worth earphones.

So my next best bet was Amazon, I was really afraid to order from Amazon since it is not part of Sennheiser network but the customer service assured me of a genuine unit or my money back without a fuss.

I trust Amazon even if not Amazon sellers, thus for the first time in my life I placed an order outside the Sennheiser authorized dealer network on Amazon.

Result?, my fears were right, I received a fake unit shipped from USA.

The low end sennheiser earphones are nothing to write about but the high end ones are perfectly made, no molding or packaging flaws whatsoever and no fake can replicate that if you have an eye for detail and precision.

I have attached pictures showing you all how to detect a fake and take my word, every review On Amazon saying the sound of the IE80 is not good is because they got fakes and those who actually know they got fakes have also said so. The far inferior CX6 I had for 9 years blew away every Bose, Dr. Dre, Apple earphones released till Feb 2018 and the IE80 is a level above the CX6.

1) This is a screen shot of a YouTube comparison between a real IE80 and a fake, look at the difference in precision of the earphone cable connection terminals, the real one has shiny perfection at sub millimeter level, while the fake in the video shot is crude.

2) This is a pic of the cable terminals on the fake unit I got from Amazon. This one is even more crude than the fake unit in the Russian comparison video.

3) & 4) Look at the disgusting molding quality of this Grey flanged silicone tip. The real one would be submilimeter perfect.

5) In green circles lies the mismatch in the shapes of the holes in the packaging and in orange I have shown a molding defect where a 2mm piece is protruding in the clear plastic. A real unit would have perfectly molded plastic.

6) The sticker is not perfectly parallel to the box edge. On the real unit it is.

7) Look at the disgusting gaps in the box corner foldings that I have highlighted.

8) Just under the clear plastic hook on top of the box, you can see the exposed crude brown cardboard, this crude nonsense doesn't exist on the real unit's box.

9) You can see the molding mismatch on top and bottom seams on the earphone box as well as imperfect molding seals encircled in green.

10) & 11) Taken with a bright window in background, you can see the molding gaps in the I side of the earphone storage box. Also the crude brass looking metal shim at the back which in the real unit is perfectly finish chrome colored shim that attracts the magnet fitted to the slide out earphone holder section in the storage box.

I hope Sennheiser Germany gets its act together in India and takes Sennheiser India and their entire dealer network in India and especially Bangalore to task. I have never seen a company selling high End products be so callous, careless in treating its customers to the point of having a non-existent customer service and a perennially unanswered customer care number.
続きを読む

Mr S J Dowell
5つ星のうち5.0 Simply Unreal - Buy, Now.
2015年1月16日に英国でレビュー済み
Amazonで購入
One of the best purchases I have ever made.