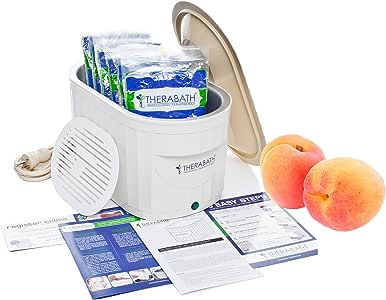 lelier
5つ星のうち5.0 For chronic hand pain, it is WORTH the extra expense! If you want one for a manicure parrafin bath to use ocasionally, maybe no
2016年7月11日 - (Amazon.com)
Amazonで購入
I have had a lesser expensive paraffin bath and believe me, this IS worth the extra expense! As I mentioned in the subject line maybe not if you don't have a medical reason and or won't be using it frequently.

I have Fibromyalgia, arthritis and Hemochromatosis (which can and in my case DOES cause joint pain) and have wrist pain every day.... I find myself rubbing my wrists and hands unconsciously, dropping things when a sudden pain occurs, etc. With these problems I am frequently looking for something to ease the discomfort to outright pain.

Years ago my husband bought a paraffin bath unit for me, it was LESS expensive, true, but it did not function nearly as well as this one does. The temperature of the wax was inconsistent, and at times too too hot, and the reservoir was small. The thing had to be reheated when I needed it and by that time I couldn't do a treatment for one reason or another At times I would have pain meds and didn't need it, or had to leave the house, etc. The point was it was seldom ready when I really needed it. It stopped working and we never replaced it.

Fast forward to this Spring. My hand pain increased and I began looking into paraffin baths again. I chose this one, despite the price as I am tired of hurting. It arrived when I wasn't home one morning, my husband opened the box and set it up for me. I came home to the wax ready to use. WOW! It was WONDERFUL! Not too hot, pleasantly warm.... with the first treatment I was sold! I use it at least 3-4 times a week. I only turned it off when we went on a trip. My hubby is an electronics technician and says it uses very little electricity and is constructed well.

I use a terry cloth towel to wrap my hands with triple/quadruple layers... I am making some custom fit mitts for myself and hubby with Velcro closure to keep the heat longer. They will be much better than the ones you can buy.. I hope!

All in all, we love it! Hubby uses it as well for his dry hands!

frfubar8
5つ星のうち5.0 Hot Wax Makes For Cool Therapy!
2018年5月11日 - (Amazon.com)
Amazonで購入
I received my Therabath Pro TB6 on 5/9/18 and have used it multiple times since then. I love this item! A paraffin bath was recommended by my OT to help with my wrist/hand issues and although this model was one of the higher priced ones, the size is perfect for me as is the quality of the wax. Yes it does take a few hours to initially melt the wax to be used BUT you can leave this model plugged in so it is ready when you want/need it at any time!

Re-melting used wax takes only a few minutes and the soothing heat is wonderful for loosening my stiff joints and tendons. I am very pleased and if this item keeps performing over the long-term as well as it is currently I will be 1000% satisfied. It is worth the price, it is a larger size so it accomadates my hand and wrist easily. It is also large enough for me to dip my elbow in and the results are great. Get it, use it.....LOVE IT!!!!
続きを読む
11人のお客様がこれが役に立ったと考えています
レビュー を日本語に翻訳する

MomtoBoys
5つ星のうち5.0 SOOTHING therapy for DRY winter HANDS (and feet!)
2011年11月18日 - (Amazon.com)
Amazonで購入
I researched several different paraffin spas before ultimately deciding on this one. The selling points were its size (width and depth) and apparent commercial quality/durability.

The TB 6 (110V) is Therabath's newest/most recent model. The TB6 is a Professional DEEP IMMERSION (6-9 lb wax capacity) paraffin bath that accomodates hands and feet. It also has a new/improved (over the TB5 model) ANODIZED ALUMINUM TANK (with integrated handles) that is lightweight, durable, and energy efficient. This box set comes with 6 PACKAGES (6 lbs.) of Therabath of PARAFFIN WAX (which is what you need to get started). According to the manufacturer, six pounds of paraffin provides ~42 manicures (both hands) or 32 pedicures (both feet), assuming three dips per hand or foot. The plastic liners and terry mitts are NOT included. (Please see my note below about other, better options).

The Therabath was very easy to set-up and use RIGHT OUT of the BOX. There is even a 5 step QUICK and easy SET-UP REFERENCE CARD so that you don't have to read the instruction manual. The most challenging aspect was finding the perfect location in the house for the Therabath (since it needs to remain plugged in/on at all times). After deciding on the location, I just opened the 6 plastic bags containing the wax, put the solid wax into the container, placed the grate on top of the wax, placed the lid on top of that and then plugged the unit in. After waiting about 6-8 hours, the wax was melted and ready to use.

It is important to note that the makers of Therabath designed their paraffin wax spas without an external on/off switch or manual/adjustable temperature control. (When it's plugged in, it's "on" and automatically cycles on/off to regulate the temperature of the wax.) Therabath's rationale (according to their website) behind this is that the spa should be viewed similar to a refrigerator that is safely plugged in and running all of the time with internally regulated temperature controls. In reality, if you want to use the Therabath on a regular basis, you have to keep it plugged it to keep the paraffin wax melted. It takes about 6-8 hours for the wax to fully melt and be ready to use. Most people can't/don't want to wait 8 hours EACH time before using it. If you are a person that does not feel comfortable leaving things on/plugged in 24/7, then this probably is not the unit for you. I have had mine on/plugged in for almost 3 weeks without any problem. (And in the cycling on/off, it is off more than it is on - which is indicated by the indicator light.)

I purchased the Therabath to help alleviate the EXTREMELY and painfully dry and cracked hands that I get as soon as the weather turns colder. The wax feels really good on my hands. I just wish I could "soak" them in the wax. Instead, you spread your fingers, dip for a few seconds, take your hand out for a few seconds and then re-dip. (You can repeat for as many times as you'd like, but based on my experience anything over 5 times is way too much.) I got a little carried away the first time I did it and did it probably 7 times. The wax was REALLY thick, but it felt good. After that, I put my hands inside plastic bags (getting the bag on my second hand was a little more of a challenge, but doable) and then put them in terry mitts. I generally leave the wax on for about 15 minutes and then peel it off (like a glove). The first time, my hands felt like I applied Vaseline to them and then slept with socks over my hands overnight. Each time I use the wax, they feel a little softer (and better). I've heard of people leaving it on overnight, but the wax was already starting to crack after 15 minutes, so I'm not really sure it would stay attached to my hands for over 8 hours.

I decided to use just regular, generic zip-lock gallon-size plastic food storage bags and long terry oven mitts. The food storage, plastic bags are MUCH thicker (and cheaper) than the hand/foot "liners" and the terry oven mitts are thicker and hold in the heat better (and, again, cheaper) than the hand/foot mitts. You can even re-use the plastic bags to help save additional money. By using ZIP-LOC mouth bags, it's easier to get your hands in by yourself because the top stays open on it's own. It also retains heat better because you can zip-lock it to your arm.

There are MANY different scents of Therabath brand wax to choose from. I purchased the unit with the LAVENDER HARMONY scent. When I first opened the package, I thought the scent was going to be too overwhelming, but once the wax was melted in the container (and even on my hands), it was only a very subtle scent (not strong like it was right out of the package).

Overall, I am very happy with my Therabath Paraffin Spa purchase. I do have to admit, though, that I was extremely lucky and did not pay the full price. Amazon must have made a huge data entry error/glitch while updating/changing the prices in their system, because for a few hours one day it was selling for a fraction of the retail price. And that is when I purchased mine. The extremely low price was the only reason that I purchased it. I had the Therabath in my Amazon cart for a while because I was hesitant to spend THAT much money on something that may or may not work in alleviating the extremely dry skin on my hands (even though my friends swore by the paraffin treatments at their spa). I personally had never had a paraffin treatment at the spa/salon, so this was my first time trying it. For a fraction of the price, I absolutely love the Therabath. After much thought and consideration, I would not, however, pay the full retail price (for my dry skin problem) because there are other cheaper alternatives. In fact, before the price was drastically (erroneously?) lowered, I had decided that I really shouldn't spend THAT much money and instead was going to compromise and buy the Dr. Scholl's Paraffin Spa (on sale for twenty dollars at Wal-Mart) and then use the Therabath paraffin wax with that unit. I still think that is a good, lower-priced option and would still have done that if the price not been lowered on the Therabath. At a fraction of the price, The Dr. Scholl's is smaller, not as deep and is not the same commercial quality (as the Therabath), BUT it does have an ON/OFF switch and manual temperature control. Again, I have not tried the Dr. Scholl's ... only read about it. I still believe the Therabath is a far better quality paraffin spa, if you have the money to invest in it.

I highly suggest looking at the manufacturer's website (which is the name of the product dot com) because it has a lot of useful information (including care, cleaning and maintenance of the unit).
続きを読む
131人のお客様がこれが役に立ったと考えています
レビュー を日本語に翻訳する

MD.Runner.HomesteaderGirl
5つ星のうち5.0 Good product! Warms and moisturizes the hands.
2015年6月22日 - (Amazon.com)
Amazonで購入
I bought this for use at the office, at the suggestion of my practice manager. I am a Family Medicine physician and I do a good bit of Gynecology in my practice. I also have Raynaud syndrome, and my hands are chronically cold - not the best for clinical breast exams. In addition, I have eczema and dry skin exacerbated by frequent handwashing and hand-sanitizer. But since I've been using the Paraffin bath, my eczema is nearly gone. I make it a habit to 'dip' my hands 5 or so mins before a GYN exam, and my patients are very appreciative. The temperature is not-too-hot, and the unit is sturdy. Good product.
続きを読む
16人のお客様がこれが役に立ったと考えています
レビュー を日本語に翻訳する
Amazon.comのカスタマーレビューを見る(220) 5つ星のうち4.3