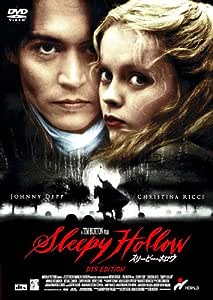 Holly
5つ星のうち4.0 Great Film- could have done with subtitles though.
2017年6月6日に英国でレビュー済み
Amazonで購入
Typical quirky Tim Burton film, which I love.Only negative issue I have is that the only subtitle available is in French. My ears aren't that bad, but there are times I have problems if anything is soft spoken or if it clashes with loud music- hence I did miss quite a bit of dialogue when I watched it. I can't understand why subtitles for the hard of hearing are not included as standard on all DVDs and Blu-ray films- including any special features that are added.
Just an observation- there are no extra features included on this disc.
Update: since posting the above I have noticed that the film can be played back in English or alternatively in dubbed French. Oddly, The French subtitles I mentioned above are available whether the film is played back in English or French. So why no English subtitles- it doesn’t make sense.
続きを読む
12人のお客様がこれが役に立ったと考えています
違反を報告
レビュー を日本語に翻訳する

Kelvin Beukes
5つ星のうち4.0 Welcome to Sleepy Hollow...
2017年8月17日に英国でレビュー済み
Amazonで購入
Shame I couldn't give this five out of five, but unfortunately there is a technical issue with this Optimum release, namely it would appear that the DVD print was simply converted to Bluray Codec resulting in grain / 'noise' image wise and desaturation of the colour palette.

The other aspect is there's no 'extras', gone is Tim Burton's interesting audio commentary, also the featurettes as featured on the DVD are not included, what is: French / English regionalisation and audio set up for home cinema kits.

What is going for it is the price and that it is a thoroughly entertaining Gothic Horror by a master of the genre.
続きを読む
4人のお客様がこれが役に立ったと考えています
違反を報告
レビュー を日本語に翻訳する

Nansorb
5つ星のうち3.0 Going for a Burton!
2016年12月20日に英国でレビュー済み
Amazonで購入
For me, Washington Irving's short story, 'The Legend of Sleepy Hollow', remains one of my enduring literary disappointments. Perhaps if I'd read it before seeing the 1999 Johnny Depp/Christina Ricci thriller 'Sleepy Hollow', I might have warmed to it more. As it is, I find Irving's novel fails to grip the imagination and to conjure up an all-important eerie atmosphere, so pales by comparison with its screen counterpart. Moreover, because Irving's novel is so short, filmmaker Tim Burton was obliged to embellish the original tale to a significant extent. Normally, I'm critical of such departures by filmmakers, but with 'Sleepy Hollow' they managed to convey the all-pervasive air of tension and disquiet so lacking in the book.I bought the DVD version issued in 2007, have played it numerous times and am very happy with it.
続きを読む
2人のお客様がこれが役に立ったと考えています
違反を報告
レビュー を日本語に翻訳する

Throda tzen
5つ星のうち5.0 “The assassin is a man of flesh and blood, and I will find him!” [Crane]
2015年12月17日に英国でレビュー済み
Amazonで購入
In this 1999 supernatural detective mystery set at the turn of the 19th Century, New York pathologist Ichabod Crane (Depp) is sent from New York City to investigate a series of murders in the village of Sleepy Hollow believed to be carried out by a mysterious Headless Horseman. Spurning the supernatural beliefs of the locals, crane uses a modern forensic approach to investigate the murders, but is he right?
One of the main strengths of this, besides the overall acting and widespread use of almost black and white photography to create a sinister atmosphere is the musical score which adds a menacing dimension to it all. Depp plays the jittery, nervous and contradictory Crane to perfection as he searches for the clues in order to find the murderer. But although It keeps your attention throughout and is packed full of suspense, and mystery. adding more twists and turns as the story unfolds, the romance between Ichabod and Katrina lacks chemistry and is unconvincing.
The single disc open directly yo an atmospheric thunder and lightning main menu featuring play, scene selection, audio [2.0/5.1, directors commentary on/off] and trailer. Slow to get into its stride, it soon gains pace to reach an exciting and ever changing finale. As a 15 rating it’s undoubtedly a ***** but ‘modern’ hard core horror buffs will find it wanting in the ‘blood n gore’ stakes.
続きを読む
1人のお客様がこれが役に立ったと考えています
違反を報告
レビュー を日本語に翻訳する

RickAnne
5つ星のうち3.0 Bluray package - not as good as it should be
2010年1月29日に英国でレビュー済み
Amazonで購入
The combination of Messers Depp & Burton are right on target with this spook tale. Its a shame then about this Bluray! I felt slightly let down because the disc wanted me to configure both picture & sound? This is something I didn't do, on the understanding that I would be only doing this 'configuring' for this particular Bluray. Also the bluray carries no decent extras (not even the extras which appeared on the dvd are included) Sleepy Hollow is a good film, I love it. It has everything Johnny Depp, Headless horseman and a fantastic Gothic look. Excellent. My reason for buying the Bluray was the fact that my dvd would not play on my new Bluray Player (?) - well actually, not completely true, I could access the extras on my dvd but just could not access the main feature. I did 'Google' this as a question, only to find that other people were having the same problem. I can only assume that an Anniversary edition of Sleepy Hollow is due (or should be)
続きを読む
4人のお客様がこれが役に立ったと考えています
違反を報告
レビュー を日本語に翻訳する
すべてのレビューを参照します
Amazonプライム会員ならお急ぎ便、日時指定便が使い放題
さらに、映画もTV番組も見放題。200万曲が聴き放題 。クラウドに好きなだけ写真も保存可能。
> プライムを無料で試す