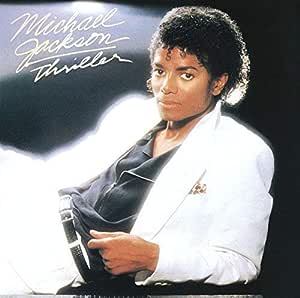 rob stirling
5つ星のうち5.0 Beware the case, otherwise 5*****.
2019年3月6日に英国でレビュー済み
Amazonで購入
What more can be said ----- one really good song, 'Thriller', made even more special by the performance of Jackson in the video by John Landis which has become an icon. Also on the DVD are 'Billy Jean' and 'Beat It'.
Separate CD with ten of his well known songs, plus a further six versions of songs with accompaniment by well known singers, not something that particularly grabbed me to be honest.

The case is a bit fiddly and easily broken due to the foldout design holding both the DVD and CD separately. Best find a more robust case for storage.
続きを読む
4人のお客様がこれが役に立ったと考えています
違反を報告
レビュー を日本語に翻訳する

Faye
5つ星のうち5.0 Undeniably: Amazing man, amazing music
2014年3月28日に英国でレビュー済み
Amazonで購入
I had always liked Michael Jackson when I was a kid in the 90s, occasionally playing HIStory in the living room or watching a live performance on TV. I played a Michael Jackson song on my Talkgirl as I played in the garden. But I didn't really get into him until I was 16, and going through some unusual and tough times. I don't remember how it started - maybe I had seen "Bad" on TV - but I went through a Michael Jackson phase at 16, playing HIStory, watching his music videos, watching documentaries. I never believed a bad word about Michael, and vocally supported him. I sent texts to radio stations asking them to please play anything by Michael Jackson, although I really had a preference for the 80s. I think his music, and possibly also Michael himself and his unusual, difficult life, comforted me. There is something very soothing about Michael Jackson, his music calms you, inspires you... and then there is Michael himself. Mysterious, strange, misunderstood... naive, innocent, kind, good.

I considered buying his CDs when I was 16, but never did. My Michael Jackson phase ended by 17, although I didn't stop being a fan, admiring and supporting him. Now, I have finally bought Thriller and Bad together. While I prefer Bad's sound personally (very 80s, very fun), Thriller is an amazing album. Wanna Be Startin' Somethin', Billie Jean, Beat It, Thriller, Human Nature, P.Y.T (Pretty Young Thing) and Baby Be Mine are brilliant songs. The Lady In My Life, Someone in the Dark and Carousel are also enjoyable. I find this album particularly soothing and the perfect MJ album when feeling happy, but calm. Songs like Human Nature are also quite therapeutic.

You don't get the new versions of songs like Wanna Be Startin' Somethin' 2008 with Akon, or P.Y.T 2008 with Will.i.am. Those are on Thriller 25, but in my opinion, not worth the extra pounds. I'm also not into music like Akon's Will.i.am's, Kanye West's or Fergie's, so I'm not missing much there. This CD is more than good enough. (But don't take it from me, listen for yourself on Spotify.)

You probably already have an idea whether you'd like this album or not. MJ's songs are legendary. But if you're a new fan, and thinking of giving the full album a try, do it! This is music as it should be. The world lost something great in MJ. But his albums will be selling for another 30 years.
続きを読む
8人のお客様がこれが役に立ったと考えています
違反を報告
レビュー を日本語に翻訳する

NDalby
5つ星のうち3.0 Could have been so much better
2016年8月24日に英国でレビュー済み
Amazonで購入
Thriller is in my opinion 'the' Michael Jackson album and the short film music videos for them set the standard for future videos. As with most albums or ground breaking music, an anniversary edition (cash cow edition) becomes the standard and this is what this album kinda is for me. The re-recordings sucked, the mastering didn't sound overly improved and the DVD shorts again could have done with some touch ups, although the Motown 25 version of Billie Jean was a good addition. The single extra voice over session from Vincent Price was nice to hear but it would have been good if they dropped the re-recordings in favour of the demos, instrumentals and voice over sessions from the deluxe edition.
続きを読む
3人のお客様がこれが役に立ったと考えています
違反を報告
レビュー を日本語に翻訳する

Sounds
5つ星のうち5.0 Iconic Album
2016年1月12日に英国でレビュー済み
Amazonで購入
Iconic Album MJ @ his best,180g vinyl version of this album is simply superb, although a slight warp on my disc, however, plays fine. Just listen to Billy Jean the bass lines are sharp and clear, Lady of My Life sounds like MJ is there in front of you. If you have a good record deck buy this version as the sound quality surpasses the CD version as the CD sounds clinical and hard compared to vinyl which has warmth in every groove. Still sounds fresh, pop at its best.
続きを読む
6人のお客様がこれが役に立ったと考えています
違反を報告
レビュー を日本語に翻訳する
すべてのレビューを参照します
Amazonプライム会員ならお急ぎ便、日時指定便が使い放題
さらに、映画もTV番組も見放題。200万曲が聴き放題 。クラウドに好きなだけ写真も保存可能。
> プライムを無料で試す