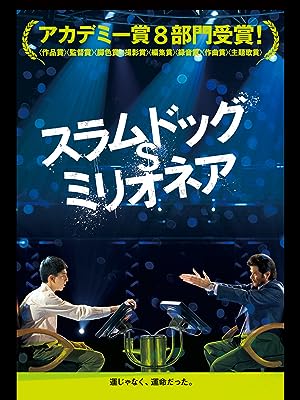 Kieron Brodie
5つ星のうち5.0 Amazing film that I recommend
2016年6月30日に英国でレビュー済み
Amazonで購入
Slumdog Millionaire is the story of Jamal Malik, an 18 year-old orphan from the slums of Mumbai, who is about to experience the biggest day of his life. With the whole nation watching, he is just one question away from winning a staggering 20 million rupees on India’s “Who Wants To Be A Millionaire?”But when the show breaks for the night, police arrest him on suspicion of cheating; how could a street kid know so much? Desperate to prove his innocence, Jamal tells the story of his life in the slum where he and his brother grew up, of their adventures together on the road, of vicious encounters with local gangs, and of Latika, the girl he loved and lost. Each chapter of his story reveals the key to the answer to one of the game show’s questions. I highly recommend this film. It was great quality and arrived really quickly. The film itself is funny and is great film with lots of great moments.
続きを読む
2人のお客様がこれが役に立ったと考えています
違反を報告
レビュー を日本語に翻訳する

Michael Ashton
5つ星のうち5.0 A Silly, beautiful story
2015年11月13日に英国でレビュー済み
Amazonで購入
I find some of the comments on this film say more about the watcher than they do about the film. This film is beautifully made and extremely well acted almost without exception. There ARE points where accusations of "glossing over" the serious flaws in Indian culture are held up to be seen, but this is not a documentary, nor is it an indictment of the many dreadful aspects of modern Indian culture. It is a silly story about Jamal and his story. Unless you take this film on the terms Danny Boyle made it, you are missing the point. I've edited this review after watching Danny Boyle's commentary. It just makes it better still.
続きを読む
違反を報告
レビュー を日本語に翻訳する

Brighton Phil
5つ星のうち3.0 Not so thrilled...
2014年4月30日に英国でレビュー済み
Amazonで購入
I expected the film to be more upbeat. Its actually quite unpleasantly violent in places. While I am sure that is sadly closer to the real life experiences of many children in India this did not sit well with the marketing or upbeat hype of the film. Its still a good film, but don't expect as I did that it will lift your spirits or be mainly about the songs and music. The "Who Wants to be a Millionaire" thread being the story works as a fairly clumsy, in parts, means of telling the story.

Given the positive hype I was expecting an extraordinary film and perhaps judging it by that expectation is harsh - its a good film but not, for me, a great one.
続きを読む
2人のお客様がこれが役に立ったと考えています
違反を報告
レビュー を日本語に翻訳する

Julie Price
5つ星のうち5.0 LOVE IT LOVE IT LOVE IT!!!!
2009年10月11日に英国でレビュー済み
Amazonで購入
This film definitely lives up to all of the plaudits that it received at all the award ceremonies it was littered around earlier in the year. The story is genius and the casting perfect. All of the actors bar none put in outstanding performances and there is no doubt a glittering future ahead for the main adult actors. The cinematography and direction of this film are beautiful. Danny Boyle creates an atmosphere that totally immerses you in every scene. The child actors are believable with every word, while the adults have you lapping up their every word. Beautiful locations, harrowing locations - a reflection of India. Beautifully flawed characters - a reflection of money and its impact on the human soul. This movie has now entered my top ten movies of all time! BUY this movie and you won't be disappointed.
続きを読む
2人のお客様がこれが役に立ったと考えています
違反を報告
レビュー を日本語に翻訳する