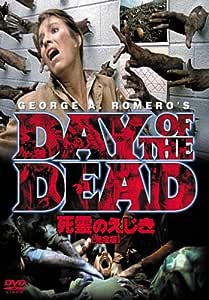 S. Lornie
5つ星のうち5.0 Underrated '80s classic!
2020年2月26日に英国でレビュー済み
Amazonで購入
When it comes to George Romero movies, everyone knows Night of the Living Dead and Dawn of the Dead. They are genre defining classics after all and are well worth owning for quite literally any horror fan. For some reason, people always over look the third movie in the series, Day of the Dead. The best of the original three, in my opinion.

Day of the Dead was originally released in 1985. It was written and directed by George Romero, produced by Richard Rubinstein and features Lori Cardille, Richard Liberty and Joe Pilato in the lead roles. It's a movie about a team of scientists and soldiers holed up in an old bunker during the zombie apocalypse. The eggheads are trying to find a "cure" or a means to live with the zombies and the military personal are all on edge, fed up with playing protector and are on the verge of cracking due to the stress of the situation.

Despite being a fairly simple premise, I think the story for Day of the Dead was very well done. The atmosphere is quite bleak, the end of the world has happened and there is no hope whatsoever for our characters. We get to know several interesting people like Dr. Frankenstein the butcher, William the alcoholic radio operator and even the strangely lovable "Bub" the zombie. Joe Pilato's soon to be crazy Captain Rhodes is the scene stealer. He may not be a world class actor, but he certainly did the job here. He steals every scene he's in with great quotes, a lot of energy and creates serious tension between him and the other characters. The chemistry between characters makes it really hard to look away from the screen as you just don't know who'll crack first.

When it comes to the original trilogy, Day of the Dead is by far the best looking of the lot. The zombie make up is absolutely stunning. You'll see zombies all pruned up from the heat outside, the good ol' blue make up from the fresher corpses (see Dawn of the Dead) and others who have rotted to the point their body is falling apart. No doubt this is down to the excellent work by Tom Savini. His work on this movie is by far his best up until this point. This movie contains a lot of the gore shots and even some of my favourite from any movie. They are a great sight to behold. Some of them are so clever that they hold up to this day.

I also think cinematography and set design is particularly good. There's a lot of effort put into making the tunnels and rooms look restrictive, claustrophobic but familiar. Despite a good chunk of the film taking place underground, you know exactly where every character is and it doesn't ever look off putting. Set design and lighting really works here. The tunnels also have a striking contrast to everything above land which is bright, green and quite beautiful (despite the shuffling undead).

The version of the movie I own on bluray is the Umbrella Entertainment copy. It features 2.0 and 5.1 sound, a tonne of extras on the main disc including TV spots, trailers, interviews with the director etc. As an added bonus, there's a second DVD that features "The Many Days of the Dead", "Joe of the Dead", "Reflections on the Living Dead", "Travelogue of the Dead" and an image gallery. Safe to say, there's a lot to see here and a worth pick up for any fan.

In terms of image quality, it's not the best. It IS definitely an improvement on the old DVD copy but it's not as sharp as it could have been. The first portion of the film when they're looking for survivors looks a little rougher than the rest of the film, it was the same on the DVD. Possibly cheap film used on set or print damage? When the film gets the main facility, the image quality jumps in quality. The main difference between this and the old DVDs is the sharpness and intensity of the colours, especially red. You'll notice a lot of fine detail in all the gore shots, something I'm sure fans will love. It all looks so juicy.

If anyone is wondering, the Umbrella Entertainment copy IS region-B and most definitely works in UK players. It's not the cheapest film out there but no doubt fans of Romero's zombie films will desire a copy and if they do, this is a good alternative. It's not breaking the bank like the American and deleted Arrow Video copies. I recommend checking it out. It's still my favourite of all the zombie films and I think it's held up rather all.
続きを読む
2人のお客様がこれが役に立ったと考えています
役に立った
フィードバックを送信中...
フィードバックをお寄せいただきありがとうございます。
申し訳ありませんが、お客様の投票の記録に失敗しました。もう一度試してください。
違反を報告
レビュー を日本語に翻訳する

paul heusser
5つ星のうち5.0 Top Zombie Kills
2020年4月25日に英国でレビュー済み
Amazonで購入
Slow burner, just as gory and awful acting, that makes you laugh! THE BEST SFX for that era, personally they're the best death by zombie scenes ever. Great to watch with friends, darkness, surround sound, even better if some haven't seen it!!
In my top 3 all time zombie movies.
Also in perfect condition, came on time.
続きを読む

Miskatonic
5つ星のうち3.0 Excellent transfer, but my disc was faulty
2014年4月21日に英国でレビュー済み
Amazonで購入
I encountered a problem with this disc which turned out to be the result of a faulty pressing. I returned the disc to the seller as per their instructions but am yet to receive my refund.
I was able, during the troubleshooting process, to create a watchable copy (now deleted) of the main feature, so can offer this brief review:
The picture quality is fantastic. I was torn between this and the Anchor Bay BR release, mainly because the Shout! Factory release has a distinctly warmer colour tone, but I'm glad I chose this one. The colour tone makes the characters look naturally tanned, whilst the gore gains a great deal more impact because of the more visceral colour of the blood. The image detail is fantastic throughout.
Unfortunately, the audio has a small flaw: sibilance seems exaggerated and can cause "s" sounds to be overly sharp and to squash other sounds. It doesn't distract from the film as a whole, however.
Definitely recommended to fans and newcomers alike.
続きを読む
3人のお客様がこれが役に立ったと考えています
役に立った
フィードバックを送信中...
フィードバックをお寄せいただきありがとうございます。
申し訳ありませんが、お客様の投票の記録に失敗しました。もう一度試してください。
違反を報告
レビュー を日本語に翻訳する

Koobismo
5つ星のうち5.0 Is what zombie movies should be
2016年4月23日に英国でレビュー済み
Amazonで購入
My personal favorite when it comes to zombie entertainment and, arguably, George Romero's best - and goriest - movie. The dead come back to life, and what's left of the living is slipping away into oblivion... I'm sure you know the drill by now. Unlike most zombie flicks nowadays, Day of the Dead approaches the topic with an intent to explore, searching for a new story hook and a new way of looking at the world established in the previous two "of the Dead" movies. As fun to watch as it ever was, this movie comes on top when compared to the entries of the modern zombie genre. Watch it, preferably when munching on some smoky ribs.
続きを読む
4人のお客様がこれが役に立ったと考えています
役に立った
フィードバックを送信中...
フィードバックをお寄せいただきありがとうございます。
申し訳ありませんが、お客様の投票の記録に失敗しました。もう一度試してください。
違反を報告
レビュー を日本語に翻訳する
その他の国際レビューを読み込む

Paul Keegan
5つ星のうち5.0 Yes, very good
2015年3月22日に英国でレビュー済み
Amazonで購入
I like this DVD, had it on video, and replaced it. I think George Remero done a great job, despite the budget for this film being halved. Strong performances from the actors/actress. There is some DVD extras, which when I saw was surprised. Good soundtrack. and there is also a small book in the DVD case, which gives some information about the film.
続きを読む
2人のお客様がこれが役に立ったと考えています
役に立った
フィードバックを送信中...
フィードバックをお寄せいただきありがとうございます。
申し訳ありませんが、お客様の投票の記録に失敗しました。もう一度試してください。
違反を報告
レビュー を日本語に翻訳する

Miss Susan Birrell
5つ星のうち5.0 Great
2016年1月25日に英国でレビュー済み
Amazonで購入
I just love this film. I've been looking for it for a long time so glad that i found it on amazon. I need to keep a better on this one so it doesn't go missing like muvlast one. Delivery was quick i would recommend this to anyone.
続きを読む
1人のお客様がこれが役に立ったと考えています
役に立った
フィードバックを送信中...
フィードバックをお寄せいただきありがとうございます。
申し訳ありませんが、お客様の投票の記録に失敗しました。もう一度試してください。
違反を報告
レビュー を日本語に翻訳する

Amazon Customer
5つ星のうち5.0 Finally got it on dvd after all these years...
2020年2月20日に英国でレビュー済み
Amazonで購入
Excellent zombie flick, I was watching it trying to compare it to a modern film, it is way ahead of its time. Worth the buy.
続きを読む
役に立った
フィードバックを送信中...
フィードバックをお寄せいただきありがとうございます。
申し訳ありませんが、お客様の投票の記録に失敗しました。もう一度試してください。
違反を報告
レビュー を日本語に翻訳する