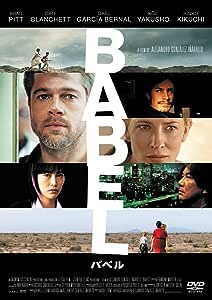 Richard
5つ星のうち5.0 An old favourite in high-def
2014年6月14日に英国でレビュー済み
Amazonで購入
I've always loved this film, and in high-def it works just as well, with the extra edge that extra clarity can bring. The film itself, with its multiple and non-chronological timelines that are all interlinked, is exemplary storytelling, and the overarching premise of humanity's confusion in the face of so many languages and cultures is likewise well portrayed. The story begins with a gift from a wealthy man to a poor man on another continent that in turn cuts into the lives of people from a third place that then has ramifications (deportation) for a person from a fourth culture.

The apparently "random" sequencing is anything but, and the storytelling succeeds because in your efforts to sequence the events "correctly" and figure out cause and effect, you are building the narrative for yourself and in doing so, you get the insights that the director was after all along. Eminently re-watchable on so many levels, this film succeeds across the board, getting into the cultures it touches (not just national, but child/teen culture and rich & poor alike) in a meaningful way and making the characters all gloriously vulnerable and real. Even the couple holidaying to rebuild their relationship in the aftermath of a child's death - screened by their Western ideas of appearances, conceits, and vanities, become vulnerable and human (again) with oddly tender moments and a sense of the rebuilding that adversity can bring.

What got to me most was that all the protagonists are in some way good, even if they do things that are wrong (or illegal) - I could see why they arranged their lives in the way they did and the necessities they were driven by and the compulsions they were responding to. I've always felt a tie to films such as this (and The Mission) where terrible things happen but the conscience (even of the darker characters) is a common thread. I keep mentioning "human" because this is to me an intensely human film, and it is a story I'm glad I was told. Always liked it, always will.

I also liked the political aspect of the ending, where "the media" and "the politicians" get involved to twist (and in some cases delay) the events that have unfolded to suit their own ends - wonderfully underplayed and thus not moralising or preaching - which sets the seal on why we sometimes find the world so hard to understand.

The Blu-Ray version is generally good, although in some interiors later in the film there is a graininess that caught me by surprise after the clarity thus far. The overall greatness of the storytelling overrides technical concerns so far as I'm concerned - and it may even be that the treatment of these interiors was intentional, since by this time the film is re-entring the so-called "real world" that seems by all accounts to look at the world through a distorted and compromised lens. Inarritu's lens is thankfully clear.
続きを読む
3人のお客様がこれが役に立ったと考えています
違反を報告
レビュー を日本語に翻訳する

S. Calabrese-mazzitelli
5つ星のうち3.0 Like I said
2018年5月16日に英国でレビュー済み
Amazonで購入
Give it a chance. This movie is heavy BUT it actually shows how a chain of events can happen over just ONE happening.. Like I said, it's heavy but is it worth watching? Absolutely!!!!!
続きを読む
1人のお客様がこれが役に立ったと考えています
違反を報告
レビュー を日本語に翻訳する

S Smyth
5つ星のうち4.0 Has interesting parts.
2017年3月2日に英国でレビュー済み
Amazonで購入
The effort to reconcile the disparate chronologies of the three story strands into a single narrative is awkward and fails to imbue the proceedings with much in the way of narrative drive. Even so, Babel has its charms. The Japanese thread was interesting.
続きを読む
1人のお客様がこれが役に立ったと考えています
違反を報告
レビュー を日本語に翻訳する