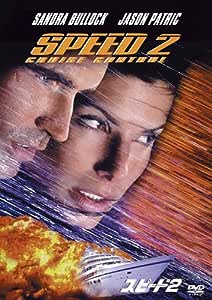 Benminx
5つ星のうち3.0 Fun little movie - watch at distance from amazing predecessor to avoid disappointment
2010年12月6日に英国でレビュー済み
Amazonで購入
Speed 2 suffered from that occasional curse of sequels:
"We MUST make it - the first one made us TONS of money!"
As a result we get a movie that was rushed into production with everyone expecting it to work the holy trinity of Hollywood - IE: that it would be a) a mega cash-cow at the box office, b) tremendously exciting, and c) feature above average snappy dialogue and chemistry between the leads.
As is widely known, it tanked. People couldn't get excited about something that could just about scrape 30 knots (approx something like 36 mph), wasn't wired to totally blow up, and wallowed like a shiny whale. For a movie called 'Speed' 2, everybody pointed out, wasn't it counter-intuitive to set it on one of the slowest forms of transport in the world?
Despite all that, and despite both the writers & producers and returning director Jan De Bont 'pass-the-parcelling' the blame backwards and forwards between each other about where it messed up, it really isn't all that bad.
Underrated Jason Patrick (pretty good as an action-man, and certainly looking like he's put in the gym time for the part) plays Sandra Bullock's new boyfriend. We're indulged about where Keanu went with a brief explanation that she can't cope with the worry of dating a SWAT cop. Unfortunately for her, that's exactly what new beau Alex does for a living, so to make up for hiding it he whisks her away for a luxury cruise to the Caribbean.
All well and good, until irritable computer genius Willem Dafoe seizes the ship in a cunning and ruthless scheme.
The chemistry between Bullock and Patrick works - it just suffers a little in comparison to the 1,000 candlewatt energy and hungry enthusiasm of Reeves and Bullock in the original Speed - a lower budget sleeper hit that wasn't expected to do quite as well as it actually did.
It also has a slightly more laconic script. This one's clearly meant to allow the characters to grow a little, with a bit more chat before the mayhem hits.
Once it does, it's actually quite impressive. The dangers and mechanics of a vessel weighing as much as an apartment block going out of control are slickly presented (especially in an enjoyably over-the-top destructive finale), and we get a lot of moments of Bullock and Patrick in peril either trapped in compartments or getting soaked to save the passengers. Willem Dafoe overplays his wide-eyed maniac of a bad guy, but despite the side of ham he brings with him and the bizarre back story he gets, he still manages to seem like enough of a nasty piece of work for you to enjoy the tension and danger between his hijacker and the good guys.
The scenery is gorgeous, the direction is pretty flashy, and there are a fair few gunshots and explosions. It just could have done with tighter pacing and fewer of the big set pieces relying on delayed countdowns of 'is it going to...' expectation.
Don't let the negative comments put you off completely - it's trashy and a let down as a sequel, but it's still fun in its own right.