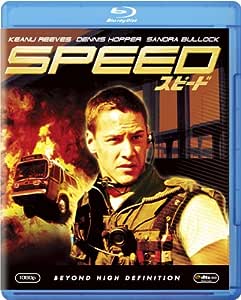 Morden Boy
5つ星のうち5.0 More haste, less speed!
2020年1月6日に英国でレビュー済み
Amazonで購入
Classic 90s action movie. Saw it at the cinema in Sutton, Surrey in 1994 and the audience were cheering by the end and mentally drained! A rollercoaster of a ride! Happy days! Now my sons at University love it too!
続きを読む
1人のお客様がこれが役に立ったと考えています
違反を報告
レビュー を日本語に翻訳する

Stampy
5つ星のうち5.0 excellent thriller
2008年1月18日に英国でレビュー済み
Amazonで購入
Keanu Reeves (The Matrix) stars as Officer Jack Traven, a professional police officer who is caught up in a deadly game with Howard Payne (Dennis Hopper). Payne puts a bomb on a city bus, and if the bus drops below 50mph, it will explode.

A plot which has Oscar winning special effects, Speed will keep you on the edge of your seat with fast buses, trains, lifts and explosive scenes justifying the thriller genre. The plot to keeps you guessing and engaged with character situations essential.

Hopper's character is marvellous. One of the best villains I have seen, Howard Payne is in control and a genius at causing problems for the public and police force as he demands money for his trouble.

Keanu Reeves also portrays his Officer exceptionally well, portraying him as very professional and organised and adventurous. The relationship between Traven and Payne makes the film even more engaging and exciting as it becomes very personal.

It's the suspense which makes this film. As the bus speeds around the city it faces many obstacles in order to get through unscathed and when unbelievable circumstances arise it's up to Traven and the passengers to tackle.

When certain scenes have featured you may question the realism of the event and I myself have a few views about that, but the bottom line is that this is a high paced energetic thriller with stunning effects, plot, scenarios, and acting and is not to be missed.

Miami
5つ星のうち5.0 Action!
2010年12月26日に英国でレビュー済み
Amazonで購入
Amazing action which is genuinely well made. We follow a lift bugged with a bomb by a revenge-driven extortionist who then manages to get away and plant a bomb on a public bus which has to speed above 50mph to avoid detonation. Jack Traven (Keanu Reaves), LAPD SWAT team specialist, is sent to get into the mind of the madman and defuse the bombs. Highlights include the jump of the bus over a huge gap in an unfinished elevated freeway. The special effects are amazing. This is another old film but it is amazing as the other reviewers can testify.
続きを読む
1人のお客様がこれが役に立ったと考えています
違反を報告
レビュー を日本語に翻訳する

Mandy
5つ星のうち5.0 Great film
2019年3月30日に英国でレビュー済み
Amazonで購入
I had not watched this movie for quite a few years and it is a really great film for all ages.
続きを読む
違反を報告
レビュー を日本語に翻訳する