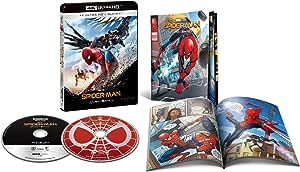 Kids got a future.

The world is changed. The times were changed, too.

Paul Tapner
5つ星のうち5.0 Spider-Man begins again. Again.
2017年11月22日に英国でレビュー済み
Amazonで購入
A new Spider-Man movie. As with 2012's the Amazing Spider-Man, this is a totally fresh take on him shorn of any connections to previous Spider-Man. But unlike that, this one does take place in the same fictional Universe as Marvel comics movies such as those with Captain America, Iron Man, and the Avengers.

Thus familiarity with those will help. Especially with last year's Captain America: Civil War. As this shows what happens to Spider-Man after events in that.

Peter has to balance school life with superhero life. With pining after the seemingly unattainable girl. With dealing with bullies. And his gig with the Avengers not being quite all he hoped it would be. Meantime, construction crew boss Adrian Toomes has spied an opportunity, and is making money from it. In the role of the Vulture. He and Peter are about to meet, and their worlds will never be the same again...

Whilst I liked previous Spider-Man films for what they were, this does the character a power of good by putting him in an established and recognisable cinematic universe. And it's all the better for it. Yet it does keep all that on the sides with cameos and references, and keeps the focus firmly on Spider-Man himself. Which is the right way to go.

It also gives us what the previous films didn't. Peter's high school years. All superbly portrayed. Tom Holland is as brilliant in the role as he was in Civil War, and he is surrounded by an excellent supporting cast for these scenes, which do balance character drama with humour superbly.

Michael Keaton is also great as Toomes. And it's nice to get a villain who isn't someone who got powers in a lab accident and has gone on a crazed revenge quest, rather one with very believable motivations.

It's also nice not to have to go through Spider-Man's origin story once again.

The best Spider-Man film ever. Huge entertainment. Well worth a watch.

There's an extra scene in the middle of the end credits. And one at the very end as well. They are worth waiting for. Possibly.

The dvd has the following language and subtitle options:

It begins with an anti piracy ad, which can be skipped via the next button on the dvd remote.

It has the usual flyer with code to download copy of the film to a digital device.

Searching for Spider-Man: a seven minute overview of the film and it's production. As short as these usually are, but manages to get a lot in and is really a great watch.

Jon Watts: head of the class: four minutes about the director. Not as much detail as the above, but not bad and worth a watch.

A look at Marvel's Spider-Man playstation four: a two minute long feature and clips about another Spider-Man game. A short but interesting watch.

ZeitGhoul (music is my sanctuary)
5つ星のうち4.0 A lighter more fun Spiderman here...and so it should be!
2018年2月21日に英国でレビュー済み
Amazonで購入
Tom Holland is an excellent Spiderman - my fave since Toby Mcquire - but where Mcguire captures the vainer self indulgent, more artistic and romantic side of the character, I think Tom is a nice foil as he is the lighter, comic, teenager version that is that little bit more open to what the world has in store for him.
We also new tom was fab from Civil War - such a brilliant intro.
If not seen - do not read on from here.........

Now here's the but you knew from my opening sentence was going to happen - 'but' the film is not quite a five star experience because of what I have already mentioned. Spiderman, like superman has got alot holding it back as a franchise, and you feel this burden if you are any kind of super hero fan. What is great here is that the directors and producers have done their best to lighten the load and given a snapshot of the character here without feeling they have to start from scratch - like the Matrix, the story works because you are stepping into a world as apposed to having to go though what we already now know about the character. I like the wit of the script and irony of vulture being acted out by oscar winner Birdman himself....really well i might add - and the ending was also really sweet - loved how the vulture stays human really - instead of trying to be more super villain he actually helps protect Peters identity - he 's a villain who's just a bloke - be he has a moral spectrum in the end....a really nice twist.

Effects are very good - and theres a lovely pace to this entertaining film. Much better than the last two spiderman films, and nicely attuned to the marvel universe. Id still say that Guardians and Dr Strange are my faves from Marvel so far - closely followed by Civil War, Ant Man and Captain america, but this is a quality film too..

lee farmer
5つ星のうち4.0 A fun ride for my fave superhero in his first solo mcu adventure
2017年11月20日に英国でレビュー済み
Amazonで購入
As a lifelong spiderman fan, I got excited the day hey announced he would be coming to the MCU. It was so worth the wait!

My fave version of spidey is the teen beginner so I have loved scene it through the spidey comic series,mthe ultimate spidey comics, the spectacular spidermsn cartoon and even the Mary Jane comics.

Some criticisms from this site are valid, the spidey suit is so gadget loaded it makes him iron man jr or is basically a bond gadget. However it's part of him learning he doesn't need the suit like he thinks and he manages to use his own powers and strength in the the climax using the homemade suit which is now my fave spidey movie suit.

Plus they basically took ganke and gave him ned Leeds' name but I liked him in the movie. I didn't dn the changes to mj or flash too much, aunt may is handled well and just like in civil war, Tom Holland nailed the spidey role and he is now my new fave spidey.