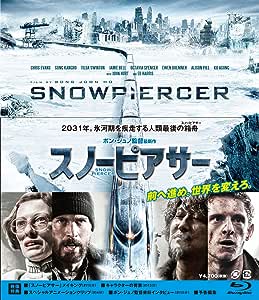 Ken O'Neill
5つ星のうち2.0 Total nonsense!!
2018年6月18日に英国でレビュー済み
Amazonで購入
I neither speak Korean nor read Dutch, so I was going to miss some of the dialogue. That's not the real issue though, not even close.

The script, direction and acting totally failed to make me care about, never mind for, most of the characters. The exception being that I took an instant dislike to Tilda Swanson's character.

Worse was to come though: I suddenly realised just how stupid the idea of making a train as a refuge capsule for the last survivors of mankind was:-
1) Who maintains the tracks if the train can never stop, and you will die in minutes if you leave it?
2) Have none of these people heard of the square-cube law? A long, thin object like a rake of coaches is purpose designed to maximise heat loss!
3) How do you maintain the power plant, and indeed the trains wheels and bearings if it can't stop?
4) How do you know the track ahead still exists if you only visit any point on the track once a year?

Given the ending I suspect that the director may have realised some of this, and carried on anyway!
続きを読む
45人のお客様がこれが役に立ったと考えています
違反を報告
レビュー を日本語に翻訳する

M J Egginton
5つ星のうち3.0 Unless you speak Korean or Dutch you are going to miss some of the dialogue with this DVD
2015年8月16日に英国でレビュー済み
Amazonで購入
Be mindful when you buy the Dutch version of this DVD. Yes, you can watch it in English. However, one of the main characters in this movie speaks Korean throughout and since you can only select Dutch subtitles (and not English) you will spend the entire movie without a clue what he is talking about (unless you are actually Dutch or Korean). For the most part this is not a major issue but towards the end of the movie this character gives a long monologue with flashbacks so I can only assume he is giving the audience some pretty important exposition. Without understanding what he is saying you might get to the end of the movie thinking WTF?
続きを読む
44人のお客様がこれが役に立ったと考えています
違反を報告
レビュー を日本語に翻訳する

Megan
5つ星のうち5.0 Took the risk and I'm glad
2016年12月2日に英国でレビュー済み
Amazonで購入
I first watched this film online and absolutely loved it. I spent ages looking for a copy of this, too sceptical to risk buying this one because of the reviews. Finally I gave in and I'm so glad I did, because despite the case and DVD menu being in Spanish (which is easy to work out, I don't know a lick of Spanish but worked out where 'play' was instantly) I was pleasantly surprised when the DVD automatically played in English. There is an Asian character who only speaks his native language and there's no English subtitle option, but I'm not too bothered because the majority of the time he has a young woman with him who translates for him, or he uses a translator box.
続きを読む
14人のお客様がこれが役に立ったと考えています
違反を報告
レビュー を日本語に翻訳する

SDX
5つ星のうち5.0 "..ORIGINAL SCI-FI GEM.."
2015年5月28日に英国でレビュー済み
Amazonで購入
PLOT...
Set in 2031, the entire world is frozen and dead after a failed climate-change experiment except for those aboard the Snowpiercer. For 17 years, the world's survivors are on a train hurtling around the globe creating their own economy and class system. Led by Curtis, a group of lower-class citizens living in squalor at the back of the train are determined to get to the front of the train and spread the wealth around. Each section of the train holds new surprises for the group who have to battle their way through.

This is indeed a very original and visually awesome looking sci-fi, certainly as others have said this is probably one of the best films you have never seen or heard of, an interesting and completely bonkers idea for a story, the movie is rather a good budget with fantastic effects and stunning scenery and set designs, each section of the train is strange and bizarre in many different ways, the cast all round is brilliant, Chris Evans is a good lead, we also have John Hurt and Ed Harris, many known faces, Tilda Swinton deserves much credit in this as she is rather creepy and yet very entertaining, the director of this movie is Joon-ho Bong, a Korean director who made the cool monster movie The Host back in 2006, I think this is an amazing English language movie that still has the feel of his previous movies, the movie for most part is entirely in English apart from the part of Korean actor Kang-ho Song (also from The Host 2006) if you love original sci-fi with a great visual style then look no further than to check out this little unknown gem, it may have a few plot holes here and there that you could possibly pick at but don't, its an amazing piece of cinema!! The film does have an R-rating as it is very violent in places too!!

Blu-ray quality is very good in 1080p HD (Italian 2-disc import, Koch Media)
Language is in full English, Italian subs can be removed from the movie,
(The occasional Korean dialogue in movie has no English subs but its not hard to follow)
Special features are plentiful indeed spread over 2-discs, TV spot and trailer, promo spot, various making of the movie features, plus much more,
(Some of the features are in English, some are Italian with no English subs,
Region B so plays in the UK, 126-mins long, 2012.
続きを読む
24人のお客様がこれが役に立ったと考えています
違反を報告
レビュー を日本語に翻訳する