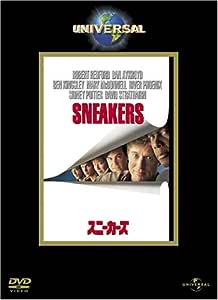 Hisham
5つ星のうち4.0 Brilliant movie.
2019年7月11日に英国でレビュー済み
Amazonで購入
I love this movie and was delighted to spot it had been given a Blu-Ray release.

I'm giving it 4 stars mainly because the movie is so awesome. It has one of the best ensemble casts ever. So many quotable lines and moments.

It's a masterclass in storytelling.

I was a bit disappointed to discover that the picture quality hasn't been improved for this edition. I was hoping they might have gone back to the source to improve the quality for the Blu-Ray - alas they did not. This is the same picture quality you will get from a DVD.

There are no special features, which is another disappointment. I was hoping they might have dug up some old interviews etc, but hey.

Sneakers is still a brilliant movie and is worth your time for that alone.

J. Reddington
5つ星のうち5.0 Sneakers is simply an enjoyable 126 minutes that you wouldn’t believe is now 20 years old.
2016年7月21日に英国でレビュー済み
Amazonで購入
A review I once wrote for an online site:

here is a simple formula for the plot of a caper movie. You introduce the gang, and it is always a gang, performing a caper for the first act, you spend the second act motivating the gang to do a much more serious caper, and in the third act you pull off the serious caper. Fade to black.
Sneakers sticks to the formula religiously. The sub-plots are similarly formulaic, and for the whole film you can’t shake the feeling that you are watching a cover version of a film you’ve seen before.
We can dispense with the plot in a few sentences. Robert Redford is a security expert who tests the security of companies by breaking into them. He’s blackmailed – via reference to a shady past- into breaking into a new place and stealing the MacGuffin. He has second thoughts and breaks into the blackmailer’s place and steals it back.
But… the simple story is told beautifully, even unambitiously by director and writer Phil Alden Robinson (who also put together Field of Dreams) and what the script lacks in grandeur in makes up in lovely touches of characterisation. Personally, I’m inclined to think the star of the production must have been the casting director: to line up Mary McDonnell, River Phoenix, Sidney Poitier, Dan Aykroyd, and Ben Kingsley, and not only convince them to do the movie is one thing, to ensure that the personalities have chemistry and that each star is playing a role they can clearly revel in is quite another.
What elevates the film from forgettable once-seen to enjoyable Sunday-afternoon movie is the excellent dialogue and the obvious chemistry of the team (any two of Redford, Aykroyd, McDowell, and Poitier riff beautifully together and this isn’t lost in the larger groups). The director sensibly gets out of the way of his cast and lets them work with a script that carefully treads between comedy and drama. The main crew are ably supported by Ben Kingsley in chilling, rather than hammy, villain mode and Stephen Tobolowsky, whose transformation from bumbling victim to chilling creep, is handled effectively in a short amount of screen time.
There are imperfections in the film, notably the opening scene ignores the main cast in favour of establishing the said shady past, and James Earl Jones‘ one scene is fabulous, but insufficiently foregrounded. It also suffers a little from not really creating much in the way of a sense of peril, the viewer just presumes that Redford’s character is going to be charming at people until everything goes to plan. However, the overwhelming feeling is of a film of enjoyable triumph.sneakers2
Some points deserve special mention: the dialogue, timing and delivery is sure-footed and solid, the set pieces, which are of course the mainstay of a caper plot, are nicely held together and the plot survives repeated watching. Two things stand out as exemplars that other film-makers should pay attention to: the quality of the technical dialogue and the enduring longevity of the film.
First the technical details: viewers of film and TV are used to characters delivering a few lines of technical gobbledygook whenever the writer needs a technical reason to drive the plot. Invariably this gobbledygook causes groans from those who do pay attention to technology. One of the astonishing things about Sneakers is that the technical gobbledygook – while serving the classic dialogue purposes of making the character sound smart and also driving the plot – does make sense, and does provide reasonable justification for the actions taken in the movie.
All of the security plot (the creation of the MacGuffin the team is to steal and the methods used to steal it) is reasonable, possible, and, amazingly the cast manage to say the right words in the right order and stress the right words in such a way that they genuinely convince sceptical technical nerds in the audience that they know what they are doing… (sadly this only extends to the dialogue and the actors, the visual effects department didn’t get the memo and so we are treated to some very dated visuals of ‘decryption’ happening in a very odd way). This is a film that is an example of how easy it is to get small details right when you take the time.
Finally, this is linked to another point: the film has barely dated. Most characters are seen as scurfy and unfashionable so the hair and clothes haven’t dated, and the technical details -somewhat fortunately – describe problems that still exist. There are almost no scenes where you think, “Well he’d just sort that out with an iPhone these days” (although someone does use a car-phone at one point), and because the direction is so laissez faire there is no sense that the film is from another time, or trying to make a particular statement.
続きを読む
3人のお客様がこれが役に立ったと考えています
役に立った
フィードバックを送信中...
フィードバックをお寄せいただきありがとうございます。
申し訳ありませんが、お客様の投票の記録に失敗しました。もう一度試してください。
違反を報告
レビュー を日本語に翻訳する

But most importantly this 1992 movie came with a great script that relies on smarts and wit rather than over-dramatic action.

Although technology has moved on, its core ideas (especially the question of quite what the NSA is getting up to with its snooping) are still very relevant. As one of the computer hackers says: "It’s not about who has the most bullets. It’s about who controls the information. What we see and hear. How we work. What we think. It’s all about the information."

Yet for all the occasional seriousness, this is really one to watch for fun, right from the anagrams in the opening titles and especially for the famous scene where the route that kidnappers took with Robert Redford in the trunk of their car is recreated by dissecting the sounds he heard along the way.

Helena
5つ星のうち5.0 DVD "Sneakers"
2014年5月1日に英国でレビュー済み
Amazonで購入
Loved this movie when it first came out and its remained a favourite for years. I thought the bouncing off each character, the fun & nonsense that went on between Dan Ackroyd and Sidney Poitier and Redford looking his usual handsome self - probably in his prime. Sad to think that the late River Phoenix, so good as the team's young apprentice, would have only a few short years to live - shame. Nevertheless, if its a rainy, cold Saturday afternoon, this is the movie to watch, its just old-fashioned professional fun...
続きを読む
1人のお客様がこれが役に立ったと考えています
役に立った
フィードバックを送信中...
フィードバックをお寄せいただきありがとうございます。
申し訳ありませんが、お客様の投票の記録に失敗しました。もう一度試してください。
違反を報告
レビュー を日本語に翻訳する

Film Buff
5つ星のうち4.0 Breaking the code with Bob and his gang of misfits!
2017年7月29日に英国でレビュー済み
Amazonで購入
Another great caper movie from Robert Redford with a fine supporting cast that includes Dan Ackroyd and Sidney Poitier .Ben Kingsley pops up as an old friend with a grudge and River Phoenix plays one of Redford's team. Great entertainment with a haunting theme tune from the late James Horner .
続きを読む
2人のお客様がこれが役に立ったと考えています
役に立った
フィードバックを送信中...
フィードバックをお寄せいただきありがとうございます。
申し訳ありませんが、お客様の投票の記録に失敗しました。もう一度試してください。
違反を報告
レビュー を日本語に翻訳する
その他の国際レビューを読み込む

Keith Phillips
5つ星のうち5.0 One of my favourite films
2013年5月14日に英国でレビュー済み
Amazonで購入
I showed this film many years ago when it was first released and I was working as a projectionist at the Odeon cinema in Leicester square London, it always appealed to me since I have been into computers almost from the outset, starting with a ZX81.
The acting is superb and the cast is almost perfect for this film, it is serious but also very funny in places, well worth watching and will take pride of place in my collection.
続きを読む
1人のお客様がこれが役に立ったと考えています
役に立った
フィードバックを送信中...
フィードバックをお寄せいただきありがとうございます。
申し訳ありませんが、お客様の投票の記録に失敗しました。もう一度試してください。
違反を報告
レビュー を日本語に翻訳する

Welwyn formed
5つ星のうち4.0 Vintage Redford?
2013年11月1日に英国でレビュー済み
Amazonで購入
This has been a favourite of ours since it's original release. Redford has a similar role to that in Hot Diamond (i.e. The stressed head of a group of oddballs.) but it contains more suspense and the humour is more muted. His 'oddballs' share the story rather than prop up his role and are an endearing bunch. Most definately worth watching.
続きを読む
役に立った
フィードバックを送信中...
フィードバックをお寄せいただきありがとうございます。
申し訳ありませんが、お客様の投票の記録に失敗しました。もう一度試してください。
違反を報告
レビュー を日本語に翻訳する

Bungie
5つ星のうち5.0 A good but underrated film
2013年11月19日に英国でレビュー済み
Amazonで購入
I love this film and feel it is underrated. One thing I do admire is that a lot of the hacking stuff (dumpster and bin raiding) is a lot more real world than some films you may see; e.g the "Hack into the Pentagon? - Click OK to continue" syndrome.
続きを読む
2人のお客様がこれが役に立ったと考えています
役に立った
フィードバックを送信中...
フィードバックをお寄せいただきありがとうございます。
申し訳ありませんが、お客様の投票の記録に失敗しました。もう一度試してください。
違反を報告
レビュー を日本語に翻訳する