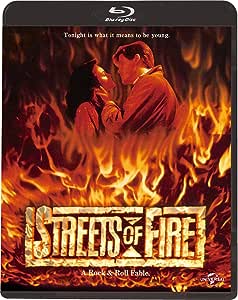 Rick Brindle
5つ星のうち5.0 A great film
2017年7月14日に英国でレビュー済み
Amazonで購入
This is an oldie from the 80's that was under rated at the time, and probably still is. Michael Pare plays the returning prodigal and has to fight the dastardly biker Willem Defoe to rescue his ex girlfriend who doesn't love him anymore. Set in a mythical 50's type US city, lots of great music, many written by Jim Steinman. This is a great action flick that is definitely not mainstream. Great fight scene at the beginning giving a masterclass in disarming a flick knife.
An Angel's Alternative
Cold Steel on the Rocks
We Are Cold Steel
続きを読む
2人のお客様がこれが役に立ったと考えています
違反を報告
レビュー を日本語に翻訳する

Alison Petrie
5つ星のうち5.0 Great escapism - buy your popcorn here!
2014年5月7日に英国でレビュー済み
Amazonで購入
Once a year I think "Yes, it's time" and watch "Streets of Fire", never get tired of it.

Fast moving, absolutely brilliant music (courtesy of Jim Steinman and Ry Cooder) and a cast who play it tongue in cheek, think of a 1950s biker movie speeded up with very loud music. It just works, simple as that, and if I could be in the film, I'd go for the Amy Madigan role of "McCoy", the tough female sidekick. Apparently the film was a box office flop when it appeared in the 80s (but I did see it at the cinema then - those were the days when you could afford to go!) but I wonder now if it's become a bit of a cult classic, hope so as it definitely merits attention - Barry Norman liked it a lot too!

The film never lets up - you get an avalanche of action, silliness and music - and it is worth seeing just to see a young Willem Dafoe in an outfit that simply boggles the mind or, at the very least, you think "Ooh, I bet they were uncomfortable to wear"!!! And I love the music - oh yes, "I can dream about you"!!!
続きを読む
4人のお客様がこれが役に立ったと考えています
違反を報告
レビュー を日本語に翻訳する

BABU VARMA
5つ星のうち5.0 ROCK AND ROLL ALL THE WAY
2010年10月10日に英国でレビュー済み
Amazonで購入
Streets Of Fire [DVD] [1984 ]This is one Walter Hill film that will never fade from your memories. I first saw the film on the big screen, way back in 1984, when it was released. I was a student of Medicine in KMC Mangalore at that time and the streets of the city literally roared with the sound of our motorbikes. We the KMC Medicos saw the film again and again. As soon as the end credits start rolling all the motorbikes of us students would start rumbling and roaring like the bikes in the film and then we would be doing exactly what Michael Pare and Co did in the film. It certainly was a cult film. It ran packed house for many many days. Now to the DVD. I just bought the DVD from Amazon.Co.UK a couple of days back and let me tell you my it brought back all the memories from 26 years ago. By the time the film ended in the Home Theater, I was already telling my wife that I wanted to buy a motorbike. She told me to remember that I was not a teenager any more. Guys let me tell you, this movie really rocks. I will not dwell into the storyline, acting reviews so on and so forth, because that's totally uncalled for. I personally think that this is the ultimate 'Bike-movie'. The music is truly awesome. You have to see the DVD in a Home Theater fitted with state of the art sound effects and then you will not know what hit you. The length of the movie is 90 minutes, but you will feel that it ended in less than 30 minutes. One gets so involved or rather engrossed in the film that time flies.
続きを読む
2人のお客様がこれが役に立ったと考えています
違反を報告
レビュー を日本語に翻訳する

Toru Okada
5つ星のうち2.0 Go for another release
2011年6月12日に英国でレビュー済み
Amazonで購入
The movie in itself has been praised here by others already, so I don't have to go into details. I really like the flow of the film, the unreal setting with it's mixture of fifties and eighties youth culture and the DOPs ability to paint with light. But this DVD release is not recommended. How can you choose the 4:3 TV master for a DVD release, cropping a substantial amount of the picture? And these people, who don't know anything about artistic values, complain about copyright infringements as an act of disrepect toward the artist? Really?
Go and buy the American release from Universal, it has the right aspect ratio to fully enjoy the camera work. Make it a good day for Walter Hill.
続きを読む
11人のお客様がこれが役に立ったと考えています
違反を報告
レビュー を日本語に翻訳する

Carl Denham
5つ星のうち5.0 Streets of Fire is still Hot...
2010年7月30日に英国でレビュー済み
Amazonで購入
I must confess I'd never seen this cult movie from director Walter Hill (48 Hours) before... But it was recently recommended to me and I purchased a copy from Amazon.
I really enjoyed this unusual offbeat film... it was great! I loved the psudo-1950's setting with its biker gangs, diners, retro-cars and run down beaten up look... it had an awesome Rock music soundtrack and the cast was pretty good as well, including a very hot Diane Lane, a tough Micheal Pare and a psycho Willem Dafoe... Amy Masdigan was also pretty good, as was Rick Moranis, cast against type as a loudmouth music agent... Look out for Bill Paxton in an early role too.
The action sequences were also realistic and exciting and it also had an unusual ending which really suited the style of this movie.
It was a real blast and an enjoyable way to pass the evening.
I understand B-movie legend Albert Pyun (Cyborg) is making a semi-sequel also starring Pare in the same style... should be a blast!
If your looking for something unusual and exciting, then Streets of Fire is for you. Check it out.
続きを読む
3人のお客様がこれが役に立ったと考えています
違反を報告
レビュー を日本語に翻訳する
すべてのレビューを参照します
Amazonプライム会員ならお急ぎ便、日時指定便が使い放題
さらに、映画もTV番組も見放題。200万曲が聴き放題 。クラウドに好きなだけ写真も保存可能。
> プライムを無料で試す