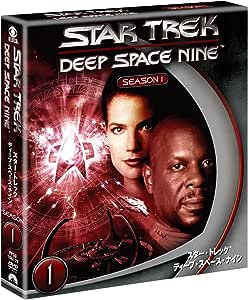 Mole
5つ星のうち5.0 Going nowhere, but still exploring
2012年8月17日に英国でレビュー済み
Amazonで購入
As The Next Generation was doing so well, Paramount were happy to consider another incarnation of Star Trek. This time, rather than being based on a starship travelling between planets, it would be more static being set on a starbase. Instead of concentrating on the new locations or characters each week, it would then have the opportunity to delve more deeply into the world of the 24th century.

This first season got off to a great start; the 2 part pilot episode showed that some officers in Starfleet had feet of clay. Other characters highlighted that the world of the future might be great for some, but there is still ignorance, intolerance, bickering and outright conflict to deal with; and they make no apologies for putting this front and centre. Add to that, there is the strange religion of the Bajora and their "Prophets"; and a much more volatile mixture of alien species than seen in the previous shows, all of them making their presence felt.

Commander Sisko (Avery) is not happy with his assignment and is considering resigning his commission; but with the discovery of the wormhole, DS9 is no longer part of the backwater of the galaxy, but is now a frontier town right in the middle of where the action is and he has to become the man to hold it all together. It's gritty, occasionally dark and has an edge to the drama that was seldom seen in TOS or TNG. There is still some occasional humour, but this first season was all about setting the stage; and they did it very well. Many of the episodes of this first season tackle some of the sacred cows of the Federation and just what it actually stands for; and the crew of DS9 have a much thinner line to walk than is normally the case.

Some great acting, superb direction, fantastic story lines with great writing make this a really excellent addition to the franchise. This box set has a number of extra items that also enhance the package and make it well worth buying. Quite simply, I loved it and will watch this series many times.

Jason Prudhoe
5つ星のうち4.0 The ball is rolling
2008年10月28日に英国でレビュー済み
Amazonで購入
DS9 is borne out of the desperation for a planets people whos natural resources have been stripped away by an agressive alien race who build the station formerally known as Terok Nor, to process the planets ore. The race in question forces the alien conquest away at a high price of blood and other heinous offenses, the federation accepts the offer from the very unstable government on the planet known as bajor and its people known as the bajorans.

At the beginning the emissary from bajor to the federation arrives to oversee Bajor's interests within the federation's blanket of protection who is known as, Major Kira Nerys, as well as her chief security officer known as Constable Odo(-Ital) who is a shapeshifter (;more info is found out in later seasons as to who he is). when Commander Benjamin Sisko becomes the overall commander of the station reluctantly because of family concerns, Tensions between the two sides explode when former terrorists from Bajor arrive on the station to trade with two notorious klingons who started a brief civil war in the klingon empire. After this event, the next one was about the pursuit between learning and religion about an artifical wormhole where unusal beings live, when later an assassination attempt was made on another political opponent and the federation was a means to an end and where Major Kira now knows where her loyalties lie.

Another influental character on board the station known as Quark, a Ferengi who has shady dealings where ever possible to turn a tidy profit when it suits his need. another more unknown charcter to the station is Elim Garak an enemy member of a race known as the Cardassians, Elim was also concerned that the terrorists that came on the station were planning something because of the Klingons who were trying to sell him out to the Cardassians.

The season gets off the ground running well when the story starts that Bajor is in real trouble and a very real chance of bajoran civil war is rampant, which was then quelled thanks to the assistance of the federation which relived so much trouble on the planet after Major Kira's first prediction failed to meet her expectations to which she was very happy. Several other officers join DS9 as the rest of the main staff, Chief operations officer Miles O'Brien who was the transporter chief on the USS Enterprise-D as well as relief tactical and ops officer. Chief Medical officer Julian Bashir who is fresh out of the top medical school in the federation who wanted the assignment to DS9 instead of a starship. Finally Chief Science officer Jadzia Dax, whos previous host was a friend to Captain Sisko and their friendship is tested during the season.

Toward the end of the season Commander Sisko has earned the respect of a few high ranking bajorans; one who was Opaca, the bajoran Kai(spiritual leader who then shortly restricted to a planet in the gamma quadrant) which is vital to the beginning of the next season when a man with too much power orders one too many mistakes..
続きを読む
1人のお客様がこれが役に立ったと考えています
役に立った
フィードバックを送信中...
フィードバックをお寄せいただきありがとうございます。
申し訳ありませんが、お客様の投票の記録に失敗しました。もう一度試してください。
違反を報告
レビュー を日本語に翻訳する

ViCo74
5つ星のうち4.0 Good Start!
2009年7月23日に英国でレビュー済み
Amazonで購入
I am not a lover of all things Trek, I like the original series and I don't mind Next Generation but for me DS9 is something special.
If you are reading this review to see if you should take the plunge and try it please do! The first two seasons of DS9 are widely considered its weakest and in light of what the show evolves in to and the coming of the Dominion then I suppose it's understandable. I have decided to watch it from the beginning for about the third time and have just finished this season and although there is better things to come I am surprised at the strength of some of the episodes.
Emissary is a very good start followed by some fun episodes like Captive Pursuit and the Nagus and Battlelines the less said about the Storyteller and move along home the better but the true stars of this season are Progress, Duet, In the hands of the prophets which are all very well told and acted shows with Duet being one of my favourite episodes from the 7 season run.
So overall not nearly as bad to watch as I remembered and what some might tell you and bear in mind the best is yet to come.
続きを読む
1人のお客様がこれが役に立ったと考えています
役に立った
フィードバックを送信中...
フィードバックをお寄せいただきありがとうございます。
申し訳ありませんが、お客様の投票の記録に失敗しました。もう一度試してください。
違反を報告
レビュー を日本語に翻訳する

Declan McCarthy
5つ星のうち5.0 Deep Space Nine- Boldly Going Where No Star Trek Series Has Gone Before
2013年6月2日に英国でレビュー済み
Amazonで購入
Of all the spin off Star Trek series that didn't achieve main stream fame and critical acclaim it is Deep Space Nine. The show is easily the most original of the shows and is as good as the Original Series and the Next Generation with interesting character relationships, such as Odo and Quark, Bashir and Garek and Sisko and Dukat and political intrigue. The environment also allows for the interesting relationships as it's set on a space station and the secondary, regular, not Starfleet people such as Garek and Quark are as good as the primary cast. Garek in particular. But most important and interesting of all is the internal conflict that takes place and this is what makes it stand out, you could argue it is also what makes it the worst spin off as it strays from Gene's original utopian vision however I disagree as conflict, in my opinion makes better science fiction. If you haven't seen DS9 yet and are on the fence about it then I urge you to watch it or at least try it out as it is very divisive but if you like it you're hooked.
続きを読む
役に立った
フィードバックを送信中...
フィードバックをお寄せいただきありがとうございます。
申し訳ありませんが、お客様の投票の記録に失敗しました。もう一度試してください。
違反を報告
レビュー を日本語に翻訳する

The Spankster
5つ星のうち4.0 did i enjoy it?
2014年4月5日に英国でレビュー済み
Amazonで購入
i dont very often give out 5 star`s unless its very special, Be proud of 4 stars, good packing, no damage to any part of the box or case/disc`s, i enjoyed watching the first few episodes on tv again and decided to get the first series, will be getting the rest of series 2 -7,

When DS9 came on sale as slimboxes i thought: "Oh well - still got space in the trek-shelf - havent I?"

I've watched this series with pleasure on TV - but hey! You never know if you missed an episode or two.

DS9 is a great spinnoff from TOS, and I'm gladly recomending this series to all who loves TOS and TNG.

D. B.
5つ星のうち5.0 love it
2014年1月12日に英国でレビュー済み
Amazonで購入
i watched all these when they first came out on video (every 2 weeks in woolworths) but you don't quite appreciate just how good it is until you watch it from start to end at your own pace
続きを読む
1人のお客様がこれが役に立ったと考えています
役に立った
フィードバックを送信中...
フィードバックをお寄せいただきありがとうございます。
申し訳ありませんが、お客様の投票の記録に失敗しました。もう一度試してください。
違反を報告
レビュー を日本語に翻訳する