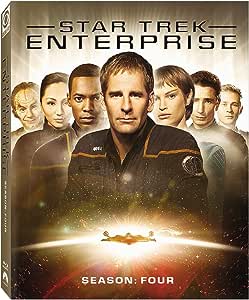 Geen Heilige
5つ星のうち3.0 All that glisters (yes, that is the correct spelling) is not gold....
2021年1月13日に英国でレビュー済み
Amazonで購入
When I first viewed Enterprise many years ago I formed the opinion that seasons 1 and 2 were pretty poor and seasons 3 and 4 were excellent. It surprised me that the series was cancelled after a good season when it was allowed to proceed after the first two, which seemed pretty poor.

I have re-watched it all recently (well, not all of the first two seasons actually) and have been forced to modify my views slightly. Seasons 1 and 2 remain disappointing, season 3 is outstanding, great TV from any perspective, and season 4 is actually pretty disappointing. Not poor, but staggeringly unoriginal.

Enterprise's very premise created certain problems for the writers. If you set a series before a whole bunch of other, earlier series (that were successful and have created a worldwide following), then you are limited by the constraints of the future created by those who have gone before you. Paradoxically, two of the best episodes of season 2 are probably also (from the point of continuity) two of the worst. The Romulans (whose ship looks far more advanced than the one Kirk jousted with) had a cloaking device - surely someone might have noted that for the future? It certainly didn't appear that Kirk et al had a clue that was out there. And surely Picard would have stumbled across the references to the Borg at some point?

Anyway, the success and genius of season 3 was in making a story that was unique to Enterprise. And an inventive and creative story spread out over 24 weeks (25 really if you include the season 2 cliffhanger) too. I have realised, having watched it again recently, that the genius of season 3 (which I can't praise enough, fantastic immersive all-round entertainment, allowing Archer to really lose his moral compass) is in setting in a previous unexplored region of the galaxy. The enemy are a complex race (with 5 species), although they are also not the real enemy (these being transdimensional beings slowly transforming our galaxy to their requirements), but the inhabitants of future Star Trek series are few and far between. The Klingons figure briefly, and annoyingly, in episode 1 and are then gone. The Vulcans are there (a whole shipload of them), but are highly emotional zombies, an excellent idea! The only other race who we have encountered before are the Andorians, and they have hardly been headliners anywhere before. So, season 3 is special to Enterprise, allowing the show and the characters to expand into their own space (pardon the pun).

And this is where season 4 is a failure. Yes, it's nicely made, well acted and with good stories. But, with the exception of Storm Front (which is really an addendum to season 3 and is equally enjoyable), almost every story owes it's existence to the Star Trek series that preceded it. We face Augments (with references to Khan and the Botany Bay), the ancestor of Data's creator Soong, Vulcans being manipulated by Romulans (think 'Unification'), Romulans causing mayhem (substitute the shapeshifting drones for cloaking), the Mirror Universe, Klingons and their diversity, etc. They are good stories, but they provided a disservice to Enterprise, and really makes it feel that all season 4 did was create the historical context for what followed. Too much reverence perhaps? Enterprise deserved better, especially after the overwhelming success of season 3.

I'm sure the average Trekkie found this fun, but the average viewer (who the ratings depend on) was probably both confused and turned off by it. What Enterprise needed was another barnstormer like season 3. I'm certain it would have lasted longer had they continued to explore their own universe rather than provide the backstory for the series that preceded them.

I would also like to protest against the clear starving of Jolene Blalock, who somehow managed to look even thinner than in previous seasons. She is not a good advert for Vulcan cuisine.

It also occurs to me that Star Trek tends to stereotype other races. Whilst from the very outset (that is, The Original Series) humans adopted a range of differing hairstyles, the alien species in the various series (and this gets more apparent from the time of TNG) are stuck with one style (and for most of their history it seems). Is it feasible that at least one Vulcan (apart from Saavik) might have considered a slightly less severe 'helmet' cut? And even more so for the Romulans, who (apart from their female commander in TOS) seem to have limited dress sense as well as poor coiffure choice. Andorians, Klingons (apart from Chang, of course), etc. I wonder if anyone involved in any of the series actually picked up on this? I don't see that we need to see a fringe and a helmet cut to realise someone is a Vulcan. It makes you wonder what happened to Saavik to give her that ability to break out of centuries of tradition when no-one else even seems to have tried.

On a more serious note though, season 4 was a missed opportunity. They had grabbed everyone's attention with season 3 and then dropped the ball. I'm sure they thought they were giving people exactly what they wanted, but what they were really doing was starving Enterprise of its own identity. Such a shame.
続きを読む
1人のお客様がこれが役に立ったと考えています
違反を報告
レビュー を日本語に翻訳する

Maite
5つ星のうち1.0 Fingerprints on unopened discs - won’t play - want refund !
2020年12月30日に英国でレビュー済み
Amazonで購入
I bought this in 2015 (so well out of guarantee though this should be covered) and packed it to watch this Xmas. Unfortunately season 2, discs 3,4 and 5 are corrupted by fingerprints (not mine) on the discs (I’ve checked all of them) so the episodes freeze after a few minutes grggghhhhhh. I’ve checked and seasons 3 and 4 are pristine, as they should be, but this is wrecking my Xmas and I want season 2 replaced !
続きを読む

5つ星のうち1.0 Fingerprints on unopened discs - won’t play - want refund !
2020年12月30日に英国でレビュー済み
I bought this in 2015 (so well out of guarantee though this should be covered) and packed it to watch this Xmas. Unfortunately season 2, discs 3,4 and 5 are corrupted by fingerprints (not mine) on the discs (I’ve checked all of them) so the episodes freeze after a few minutes grggghhhhhh. I’ve checked and seasons 3 and 4 are pristine, as they should be, but this is wrecking my Xmas and I want season 2 replaced !
このレビューの画像

Mole
5つ星のうち5.0 Sad to see it finish, but a set worthy of buying
2012年8月15日に英国でレビュー済み
Amazonで購入
Paramount originally decided to cancel Enterprise at the end of series 3, but allowed the fourth to be made. As a result, the writers really went to town to try to cram in as much as they could.

Once again, the quality of writing, direction and acting make this programme one of the very best pieces of television available. There are several multi part stories within this season, but even so the episodes stand out on their own very well. The end result was a series of episodes that addressed a lot of the back story for the "later" incarnations; and we see how the Klingons lost their forehead ridges, the beginnings of section 31, genetic manipulation and several other key items that would play a major part in the various series set further in the "future".

A particular favourite of mine were the two "Mirror" universe storylines; they even went to the trouble of re-creatinging the opening and closing sequence so that the stories were viewed as if from that mirror universe. It's clear that the actors found this a really intersting twist and in particular, Scott Bakula's impassioned speech to the crew about the preservation of the empire (part of which was cut from the programme, but shown in the extras) is a masterclass in acting.

The only epsiode in this set that was a disappointment was the final one; I'm not sure why they decided to bring in Jonathon Frakes, Marina Sirtis (both of whom I really like) and set the storyline as if it were on the holodeck of the Enterprise-D. But at the end of the programme, there is a piece showing the 3 main incarnations of the Enterprise with the relevant captains and the famous "split infinitive" speech; it still makes the hair stand up.

We need programmes like this to inspire us and the next generation; perhaps one day, Paramount will realise their mistake and introduce a new incarnation of this landmark concept and allow a new ship with a new captain and crew to explore strange new worlds, seek out new lifeforms and new civisations; and once again, go boldly where no-one has gone before.

Film and music appreciator
5つ星のうち5.0 Extremely well done Trek. The strongest Enterprise season and top 3 or 4 of Trek in general.
2014年10月8日に英国でレビュー済み
Amazonで購入
I was expecting great things and I was duly rewarded. This is hands down the best Enterprise season and one of the greatest ever Star Trek seasons period. It plays like a labour of love as if created by a true fan of the show with a whole lot of nods to elements of the original series and picking up on Trek-lore that had never been explored before. Vulcan mini-arc including exploration of Vulcan, it's landscapes and cities? Check. Genetically engineered humans arc with nine other than Brent Spiner as Dr Arik Soong? Check. Amazing mirror universe episode that blows the mind replete with while different opening and theme tune? Check! The while season is filled with cool stuff and stands apart from the other seasons. More people should see this, especially if a TNG fan who hasn't approached this yet. I'd even say just watch this season before the other 3 and you'll appreciate the others even more. Really pleased with this and only let down by a compromised finale episode that feels like an afterthought seeing as we never got a season 5, which would have frankly been *amazing*. The blu ray set goes into some of that in the extras. 5 star release.
続きを読む
1人のお客様がこれが役に立ったと考えています
違反を報告
レビュー を日本語に翻訳する

RONALD LUNSFORD
5つ星のうち5.0 The best season of Star Trek since 1968!
2015年12月5日に英国でレビュー済み
Amazonで購入
An underrated show due to issues the network and in many cases the producers brought on themselves. If you are an original series fan, this season of Enterprise is a real treat. There are several great mini-arcs that are chock full of fun things that connect to the Kirk era. When it was announced Enterprise was to be a prequel series, my hopes were raised after some of the tired, safe seasons of Voyager. But after seeing that the look and feel was not really anything close to the Kirk era, I lost interest (like many others). By the time they turned things around late in the second season, it was too late. But that doesn't mean the 4th season (and the 3rd) aren't great, because they are. It's ironic that when the reality of being cancelled was real, it was only at that point the show started taking real risks with story lines. The result? The last two seasons of Enterprise contain some of the most truly exciting episodes since the Borg cliffhanger in 1990. Oh yeah, and the Blu-ray looks great too, the best of the 4 releases.
続きを読む
1人のお客様がこれが役に立ったと考えています
違反を報告
レビュー を日本語に翻訳する
すべてのレビューを参照します
Amazonプライム会員ならお急ぎ便、日時指定便が使い放題
さらに、映画もTV番組も見放題。200万曲が聴き放題 。クラウドに好きなだけ写真も保存可能。
> プライムを無料で試す