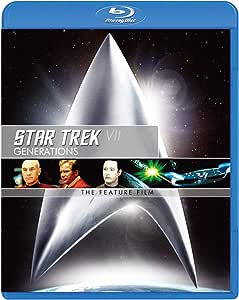 James Brown
5つ星のうち4.0 2nd best TNG film.
2018年9月4日に英国でレビュー済み
Amazonで購入
First Contact will always be my favourite TNG film as well as my favourite Star Trek movie overall but Generations comes in close as my 2nd favourite TNG film, the CGI and special effects still look great after 24 years and the destruction of Enterprise D always gets me every time, I remember watching that for the first time with my jaw wide open. The only thing I don't like is how they killed off Kirk, he deserved a much better send off but overall it's not a bad film at all.
続きを読む
1人のお客様がこれが役に立ったと考えています
役に立った
フィードバックを送信中...
フィードバックをお寄せいただきありがとうございます。
申し訳ありませんが、お客様の投票の記録に失敗しました。もう一度試してください。
違反を報告
レビュー を日本語に翻訳する

Amazon Customer
5つ星のうち4.0 Nexusspotting
2013年1月14日に英国でレビュー済み
Amazonで購入
Though it may not be a perfect film, Star Trek: Generations is very underrated, I feel. Its plot's details can't always fight scrutiny and the pace can be awkward, yet it has some intriguing ideas and genuinely poignant moments. For an odd-numbered Star Trek film, I'd say it's pretty good.
In the prologue, retired captain James T. Kirk's attending the maiden voyage of Enterprise-B when two ships, containing alien refugees, send out a distress signal; they're caught in the Nexus, a destructive energy ribbon which keeps its prisoners in states of pure joy. Thanks to Kirk, a handful of them are saved while Enterprise-B just manages to escape, though he's seemingly sucked into the vaccum of space. 78 years later (according to an on-screen transcript; dialogue puts it at 80), The Next Generation crew discover an attacked observatory and rescue Dr. Tolian Soren (Malcolm McDowell), one of the original refugees, who'll sacrifice countless lives getting back to the Nexus.
I was a bit confused by what the Nexus is and does. Apparantly those within it can alter time outside it, which makes me wonder why one character doesn't exploit this to save more lives, or why, for that matter, Soren doesn't simply go back to before he became a refugee. HOW those within the Nexus can control time outside it is another matter entirely. Also, Guinan (Whoopi Goldberg), who was with Soren in the Nexus all those years ago, describes it as though its effect is purely visceral, whereas later we learn that it works in a more psychological way, though that's a minor point.
Soren's a fairly typical teeth-gnashing bad guy. The film could have been truly epic if it had developed him the way it did Picard and Kirk; their story arcs are Generation's emotional core. I found them deeply effective, elegiac even, as they ponder what lives dedicated to duty have cost them. These men share desires and regrets, sometimes expressed by the film with great poignancy. This is where Generations truly shines, and feels like a much-critically maligned part of it. Data's subplot, involving his acquisition of an emotion chip, is also good, but Picard and Kirk are what drive this story. Patrick Stewart and William Shatner deliver great performances (I was, however, amused to see a geriatric Kirk in a fight scene). I wish more time had been spent with Kirk; he takes a long time to re-appear after the prologue, while scenes which aren't really vital pop up. His last scene, however, is really quite moving. The same Kirk who waded through tribbles, witnessed the next step in our evolution, fought Khan twice, lost a son and forged peace with Klingons, ended up 80 years from home, attended by his successor after briefly finding happiness again. It's a powerful swansong.
続きを読む
1人のお客様がこれが役に立ったと考えています
役に立った
フィードバックを送信中...
フィードバックをお寄せいただきありがとうございます。
申し訳ありませんが、お客様の投票の記録に失敗しました。もう一度試してください。
違反を報告
レビュー を日本語に翻訳する

@Dangle9000
5つ星のうち4.0 "...The predator has no teeth."
2010年11月17日に英国でレビュー済み
Amazonで購入
It's often been tradition for sci-fi films to introduce themselves with a fantastic opening shot - Danny Boyle did it recently with 'Sunshine', and Generations is where Star Trek has a stab at a sensational opening piece. As the music rises from a barely discernable sound to a familiar fanfare, a champagne bottle twists in the vacuum of space and smashes against a new vessel - the third Starship Enterprise. Captain Kirk is on board along with some old friends to see the ship off on its maiden voyage with a young crew. A symbolic jolly around the cosmos and back turns more serious though when a distress signal is received, and pretty soon Kirk is up to his heroics, but sadly doesn't return.

It's an emotional goodbye to a Starfleet icon and the first 20 minutes feel in keeping with the first 6 'Trek films. The look and style is spot on, and it's a perfect marriage of eras when moments later we get to see the Next Generation Crew and another legendary Enterprise captain.

Generations gives us an adventure which finds the two captains assisting each other to defeat a man completely blinded by his desire to find paradise in a mind altering mass of energy called the Nexus. There are some definite plot holes around the Nexus and it's never satisfyingly explained - especially how the two manage to seemingly go back in time to a specific destination - but never mind, the film has its strengths too. Malcom McDowell is perfectly cast as the villain here. His creepy delivery and slow delivery gives the impression that every word is carefully considered for maximum impact. An actor with gravitas was a definitely required and McDowell is never overshadowed by two of the biggest names in Star Trek history. McDowell's portrayal of the manic Doctor Soran is done with humility, although he is prepared to kill millions to get to his beloved Nexus he still grounded in reality - his tragic past humanises him and he isn't a simple pantomime baddy, there for the audience to hiss at.

As with many of the Star Trek films humour plays a big part, but there's no squabbling between McCoy and Spock here (they don't appear in the film) instead most of the humour comes from Data's experience of emotion for the first time. He's going through something of an emotional puberty as he gets to grips with the chip, and the whole thing does sometimes feels as though it's been done purely to give the fans something new - but I think most would have been happy to keep the 'old' Data. It works well though in parts and manages to integrate itself into the overall story even if at times it's an obvious way to shoe-horn in the odd laugh ("...you lovely little life forms...").

Struggling with emotion is a common theme of the film, whether it's Data and his positronic meltdown, Picard distraught over the loss of a family member, or Kirk seeing life as it could have been. It often gets quite sentimental but it's not too over-the-top.

The Enterprise herself is a big a star of the show as any of the crew and the Enterprise-D looks superb here. I remember watching this at the pictures when I was 15 and being in complete awe at the saucer separation scene, and in Blu-Ray it still looks good. Many will think it would look better if it were CGI, but personally I much prefer the use of models. The textures and overall physics are much more real with models, CGI can look incredible - but it can also look obviously like CGI. Although the Enterprise appears magnificent, there is a scene where the explosion of a Klingon Bird Of Prey does look just like a hollow model being blown to bits.

The model work has been tackled well with regards to camera work, we get to see the ship from all angles which is great for fans of the series who were used to standard archive shots which were re-used time-an-time again. The live action parts have a familiar feel with David Carson directing, but that's because it looks like the TV series did, it doesn't seem to have taken on the visual qualities you expect from a film. The directing style plays it safe rather than being ambitious which is shame - but that was addressed in the next Star Trek film (First Contact).

This Blu-Ray transfer looks superb, the textures are detailed and the colours are vibrant. The image is clean and the special effects are shown at their very best. The previous Star Trek films often had very quiet dialogue which was drowned out by the music, but here every word is clear. There are plenty of special features - my favourite of which are a mini documentary about the models used, and a feature covering the destruction of the Enterprise.

In a nutshell: It's clear that this film was a vehicle to get Kirk and Picard together and the rest of the film is fitted around that. The story shows great promise but in the end it feels like a two-part TV episode with a few great special effects thrown in. I'd give this 3.5 stars if I could - but I can't. The bonus features on the disk have swayed me in the direction of 4 stars.
続きを読む
8人のお客様がこれが役に立ったと考えています
役に立った
フィードバックを送信中...
フィードバックをお寄せいただきありがとうございます。
申し訳ありませんが、お客様の投票の記録に失敗しました。もう一度試してください。
違反を報告
レビュー を日本語に翻訳する

Tony
5つ星のうち5.0 never should have killed off Kirk
2013年2月28日に英国でレビュー済み
Amazonで購入
This is the transfer film from old to next generation,We begin with the launch of the Enterprise B with Kirk,Scotty and Checkov aboard and it isn't long before their up to their necks in trouble, without giving away plot lines we switch to the Enterprise D, and for once we see the crew enjoying themselves on the holodeck, not long before for all hell brakes loose and we're off on another "Trek".This film is first class entertainment the acting is first rate and for my liking Patrick Stewart has never been better,.I just wish they would have somehow brought Kirk back.Paramount would not entertain idea of bringing the old crew back again at any cost.Shame on them..
続きを読む
役に立った
フィードバックを送信中...
フィードバックをお寄せいただきありがとうございます。
申し訳ありませんが、お客様の投票の記録に失敗しました。もう一度試してください。
違反を報告
レビュー を日本語に翻訳する

Morden101
5つ星のうち4.0 best of the next gen films
2014年3月17日に英国でレビュー済み
Amazonで購入
Many give First Contact this award, but for me, that film just felt a little poo faced and the initial borg cube fight was hugely disappointing. I love the Nexus plot in this film and Kirk is given a good sendoff. not sure why it has a 15 rating though. Musical score is second only to Final Frontier

As for the Blue Ray itself. There are plenty of interesting extras to get your teeth into. The picture quality is excellent although the sound is poorly balanced. As is so often the case with 'remasted' films, the dialog is too quiet whereas the action and music too loud. This is particularly bad for the whole series, particularly the later films.
続きを読む
1人のお客様がこれが役に立ったと考えています
役に立った
フィードバックを送信中...
フィードバックをお寄せいただきありがとうございます。
申し訳ありませんが、お客様の投票の記録に失敗しました。もう一度試してください。
違反を報告
レビュー を日本語に翻訳する
その他の国際レビューを読み込む

Happy chap
5つ星のうち3.0 OK
2017年5月21日に英国でレビュー済み
Amazonで購入
Mixture of old and new StarTrek casts it works if you are fan of this iconic sci fi series if not a fan you might still find it entertaining a good cast doing a good job decent story looks a bit old fashioned compared with the new Star Trek movies but its still worth a look
続きを読む
役に立った
フィードバックを送信中...
フィードバックをお寄せいただきありがとうございます。
申し訳ありませんが、お客様の投票の記録に失敗しました。もう一度試してください。
違反を報告
レビュー を日本語に翻訳する

John M. Osullivan
5つ星のうち4.0 brilliant!!!!!!!
2012年7月25日に英国でレビュー済み
Amazonで購入
Star trek generations is a brilliant movie.It's quite hard to get used to the new crew on board the enterprise.The sad thing is that james kirk dies.It is annoying that the original crew is gone.the script writers chose a new crew because some were not there and some said the script sucked.This is probobly one of the best star trek movies.It is definatly a good family film.The film is now where near boring at all!it is brilliant!I recommend you buy it.
続きを読む
役に立った
フィードバックを送信中...
フィードバックをお寄せいただきありがとうございます。
申し訳ありませんが、お客様の投票の記録に失敗しました。もう一度試してください。
違反を報告
レビュー を日本語に翻訳する