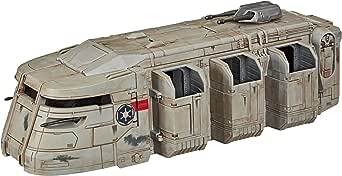 Baroness Del Taco
5つ星のうち4.0 An excellent toy but could have been better.
2020年4月2日にアメリカ合衆国でレビュー済み
Amazonで購入
After picking up the previous Vintage Collection shining star, the Rogue One Assault Tank, I was pretty excited to see what the Mandalorian Troop Carrier had to offer. It's has a similar abundance of detail with lots of molded machinery, panels and decor inside, outside and even on the underside. I love the opening driver compartments, the fold-down seats in the passenger area and the gun rack. The tiny rollers on the bottom give the carrier a great "floating" effect as it moves along.

BUT while the Assault Tank had so many more tiny bits and bobs that made it stand out like the moving guns, the opening engine repair compartment, the kyber crystal cargo, the hidden storage compartment that could also hold troops, the Troop Carrier itself stops short of anything truly "extra". I feel like it could have used its own opening repair ports, additional functional doors, rather than just the first on either side, or even a driver figure. It's also smaller than I expected, not by much, but not nearly as intimidating a force on the battlefield as it should be.

All in all, it's a great toy with a lot of play value, but in terms of actual value I feel like it's overpriced at $70 while I would have paid an even higher price for the Assault Tank. The Imperial Troop Transport is a fine addition to your Star Wars 3.75 collection, but maybe wait for a sale before picking it up.
続きを読む
2人のお客様がこれが役に立ったと考えています
役に立った
フィードバックを送信中...
フィードバックをお寄せいただきありがとうございます。
申し訳ありませんが、お客様の投票の記録に失敗しました。もう一度試してください。
違反を報告
レビュー を日本語に翻訳する