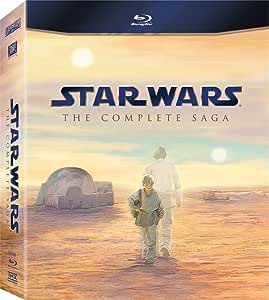 D. M. Short
5つ星のうち5.0 Blu-Ray quality so much better than DVD
2016年2月8日に英国でレビュー済み
Amazonで購入
No comment on the movie content, I'm not a film critic and everybody in the world has an opinion on Star Wars! ;-)

I bought an Epson EH-TW6600 projector last month and it really highlights the difference in image quality between DVDs and Blu-Ray. I had Episodes 1-6 on DVD box sets but decided to splash out on the Blu-Ray version because the DVD format looked annoyingly ropey (I don't considee myself an AV connoisseur or perfectionist either). I'm glad I did and if you view on large format then so will you be :-)

There is plenty of bonus material to amuse, inform and delight fans but bear in mind that some of these documentaries were filmed around the time the original trilogy were released, i.e. late 1970s and early 1980s in U.S. television format which is lower lines than European. The combined effect is a very disappointing viewing experience that is only slightly offset by the charm and enthusiasm of Mark Hamill and Carrie Fisher and the wonder of the newness of the global phenomenon. One of these documentaries is presented by Carrie Fisher who would be maybe 20 at the time who managed to smoulder and look wholesome at the same time.

Buy, watch, enjoy folks and may the remastered high resolution force be with you!
続きを読む
19人のお客様がこれが役に立ったと考えています
違反を報告
レビュー を日本語に翻訳する

Diego
5つ星のうち5.0 Beautiful Packaging, Tons of Special Features, Quintessential!
2018年8月3日にアメリカ合衆国でレビュー済み
Amazonで購入
WARNING! Before I go into the review, I want to give a friendly warning. This Star Wars Complete Saga set has NEVER been officially released on DVD format by the distributor. This set is ONLY officially available on Blu-ray format, NOT DVD. If you are purchasing this set on DVD format, you are being swindled and you'll end up receiving a BOOTLEG, an illegitimate product. That explains why many reviewers of the "DVD" version report that the visual and audio qualities vary between the films, the packaging is flimsy, fragile, or even already broken on arrival, and the discs themselves have wrinkled art and lots of scratches. Don't be fooled by listings that are fulfilled by Amazon. Just because it's fulfilled by Amazon doesn't mean it's a legitimate product. "Fulfilled by Amazon" only means that the product is shipped by Amazon, but Amazon is not the one selling it; it's a third-party seller. And because these are bootlegs, the quality between the bootlegs will vary. You might've gotten an ok bootleg, but most times, it'll be terrible. Just a warning so that you guys don't get ripped off. If you would rather have these films on DVD, these are the products you want to get. They are official releases of the films on DVD format. The links to the official DVD versions are below. They come in a combo pack.

Moving on the actual review.

This is the quintessential set for Star Wars fans! The Blu-ray transfers sound amazing and look gorgeous. While the price may be a bit steep, it is absolutely worth it. It comes with a total of 9 discs, one for each film and three dedicated just for additional special features. The amount of special features is astronomical! If you ever wanted to delve into the universe of the Star Wars films, this is the best you can get.

The packaging itself is simple, but elegant. The cover art is embossed, holographic, and attractive. The films come in a standard Blu-ray case which is enclosed in a cardboard sleeve. Thankfully, each disc has its own space. The discs are not stacked on top of each other, but instead are placed on "plastic pages". I'm sure the pictures can express that better than I can. In addition, the set comes with a small booklet entitled "Guide to the Galaxy". This booklet is simply a guide to all of the special features. It will come in handy if you ever feel a bit overwhelmed trying to navigate the special features. Highly recommended!
続きを読む

Nicky Jenkin - njenkin
5つ星のうち5.0 Fantastic Box Set! 😀😀😀👍
2020年3月2日に英国でレビュー済み
Amazonで購入
Really well presented this set. All discs are held securely and the plastic holders are of good quality so will not break easily.

High quality picture and sound on the Blu Rays. You get the 6 films consisting of the Prequel and a Original trilogy plus 3 Bonus discs of absolutely loads of cool footage. Comes with a small book of artwork from the movies which also clearly tells you what’s on all the separate Bonus discs so you can easily navigate through the Aladdin’s cave of information. Very highly recommended!
続きを読む
違反を報告
レビュー を日本語に翻訳する
すべてのレビューを参照します
同様の商品をご覧になりませんか？ こちらのリンクで参照ください。リーアム ニーソン、スター ウォーズ
Amazonプライム会員ならお急ぎ便、日時指定便が使い放題
さらに、映画もTV番組も見放題。200万曲が聴き放題 。クラウドに好きなだけ写真も保存可能。
> プライムを無料で試す