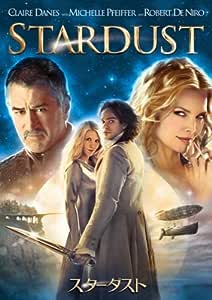 cora
5つ星のうち5.0 Two Hours of Escapism for the Entire Family
2020年4月23日に英国でレビュー済み
Amazonで購入
If you're looking for a film that will entertain the entire family for an afternoon or evening look no further. This one is perfect. The story follows its young hero on his quest to retrieve a fallen star in order to win the love of a beautiful girl. His mission takes him from the most idyllic English village you have ever seen through a gap in a stone wall to the mysterious land of Stormhold. There he encounters witches and pirates on a flying ship, and the fallen star turns out to be another bautiful maiden. And he has to deal with an evil villain who has designs to become the king of Stormhold.

The cast is fantastic with Charlie Cox as a likable hero, Sienna Miller is the girl who sends him on his mission, Michelle Pfeiffer is utterly bewitching as the wickedest of the witches, Mark Strong makes for a great villain, Robert DeNiro is the captain of the flying ship and Claire Danes is the enchanted maiden of the fallen star. Add to that the likes of Peter O'Toole, David Kelly and Rupert Everett who appear in (disappointingly small) supporting parts, glorious (mostly) Scottish filming locations, and rather nice special effects and you get a very nice film indeed. Highly recommended.

The DVD is fine. Picture and sound quality are good and there are subtitles for those who may need them. By way of extra features there is a commentary by writer/director Matthew Vaughn and writer Jane Goldman.
続きを読む
1人のお客様がこれが役に立ったと考えています
違反を報告
レビュー を日本語に翻訳する

mrs margaret quigley
5つ星のうち4.0 'what do stars do best ?'
2019年9月9日に英国でレビュー済み
Amazonで購入
a great fun film. based on a neil gaiman novel with a far happier less brutal narrative than the book source. wonderful performances and, despite a few detours near the end, a great funny wise chaotic story. a star in human forms falls out of the sky and a very special young man goes out to find her. a great cast, plus many cameos, looked like they had great fun making this and you'll have a good time watching it. i promise.
続きを読む
1人のお客様がこれが役に立ったと考えています
違反を報告
レビュー を日本語に翻訳する

Jeff F.
5つ星のうち5.0 Amazing family film - we all throughly enjoyed every minute and would watch again
2015年3月6日に英国でレビュー済み
Amazonで購入
Amazing film... if you haven't seen this then I would really recommend. This is a real gem and lost one to me... for some reason I missed this film when it was released .. maybe because there were other good films out in 2007, or maybe because my children were young? Anyway we had a dreary Saturday afternoon with my son not feeling so well. I heard about this film after watching Music channel and Take That song came on. I saw background scenes and realised 'Rule the World' was from the film Stardust. I checked out on IMDB and saw the great ratings and feedback so I got the film.
My son not feeling too good didn't want to watch it as he had not heard of it. So I said OK lets put it on for 10 minutes, if you don't like we switch off and put something else on... 5 minutes into it we were all engrossed ... We didn't even think about the 10 minute rule.
The film is very funny. Some real great moments that you won't see coming! Panto v Discworld with some "adult" very suttle innuendo's but nothing tacky or offensive ... just like watching panto ;o)
We would watch the film again and would recommend to all our friends. Honestly if you haven't seen it, it is a fantastic film :)
続きを読む
5人のお客様がこれが役に立ったと考えています
違反を報告
レビュー を日本語に翻訳する

A.Sturgess
5つ星のうち5.0 My first impressions were wrong - this is a truly brilliant fantasy
2010年1月15日に英国でレビュー済み
Amazonで購入
I had this DVD on a shelf for several months without watching it all the way through. I recall starting to watch it when I first bought it, but then gave up. Maybe I had been watching more strenuous movies or series such as NCIS or CSI-NY and these had made me resistant to the the mood for fantasy. Whatever the reason, I initially gave up on 'Stardust'.

I have just watched it all the way through and was mesmerised by the story of multiple fantastic quests --- some good, some evil and some just downright hilarious. To enjoy this film you do have to surrender yourself to the hardcore world of a child-like fantasy world where evil witches and warring brothers challenge the confused feelings of love felt by a young man; first for a girl who has no feelings for him and then for a star-girl who initially loathes him but who then loves him. Throw into the mix a superbly comic Robert de Niro as a cross-dressing pirate and a band of comical ghosts, and you're part of the way to getting a vague idea of how rich this film is in both storyline and visual magic.

Abandon the real world and open yourself up to the heartfelt warmth of this magical film.

Oh - and full marks to Michelle Pfeiffer for having the guts to to gradually have her stunning beauty transformed into the hideous hag that she becomes as the witch whose powers eventually corrode her face and body into little more than a wrinkled bag of bones.
続きを読む
3人のお客様がこれが役に立ったと考えています
違反を報告
レビュー を日本語に翻訳する

Amanda Craig
5つ星のうち5.0 completely enchanting fantasy film
2007年11月1日に英国でレビュー済み
Amazonで購入
If you have a child of 9+, this is a treat. I wasn't expecting anything special, especially not with the plethora of good adaptations of famous novels around, but my 12 year old and I were captivated.
It begins in our world ion a village called Wall, so called because it's close to a wall guarded by an old man, which is supposed to divide our world from that of Faerie. One day, a bold young man tricks his way past, and finds himself outside another village, where miniature elephants are kept in cages and a beautiful young woman, slave to a witch, chooses a flower to bring him luck in exchange for a kiss, and more. Nine months later, a baby boy, Tristran, is brought to the wall and left with his father. When he grows up, he works in a shop and is teased and despised by the lovely shopkeeper's daughter, Victoria.
Meanwhile in Faerie (yes, twee) the old king is dying and his remaining sons - those who have not yet managed to murder each other for the throne - sends a jewel up into the sky to help find the true heir. Unfortunately, this knocks a star out of the heavens, who comes to earth as the beautiful Clare Danes. The heart of a star has the power to return youth even to witches, and one of the three most evil ones, played by Michelle Pfeiffer, sees it fall and sets out to find it. But Tristran, courting his sweetheart, happens to have seen the star fall too, and has jumped over the wall to find it and bring it back as proof of his love...
What makes this film special are the unexpected twists Gaiman's script gives to traditional fairytale elements. It's funny, mad, touching and above all exciting. The actors are all clearly having a ball playing their parts (esp Pfeiffer) and de Niro as a cross-dressing pirate ("We always knew you was a whoopsie", his cut-throat crew tell him, kindly)is a delight. Apart from Harry Potter 6 and The Golden Compass this is THE children's DVD to buy of 2007.
続きを読む
3人のお客様がこれが役に立ったと考えています
違反を報告
レビュー を日本語に翻訳する
すべてのレビューを参照します
Amazonプライム会員ならお急ぎ便、日時指定便が使い放題
さらに、映画もTV番組も見放題。200万曲が聴き放題 。クラウドに好きなだけ写真も保存可能。
> プライムを無料で試す