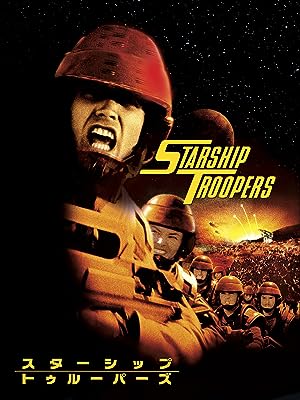 Popinjay
5つ星のうち5.0 An old favourite
2020年4月11日に英国でレビュー済み
Amazonで購入
What a superb film! Very funny, with detailed world-building and worthy of multiple viewings. Let me try to dismiss some of the criticisms:

(1) It endorses fascism. No, this film is a parody of fascism! Like all the best and cleverest satire it is sympathetic with its target. For instance it evinces a real warmth, pride and sense of belonging in Federation society. But let's not accuse 'Tom and Jerry' of promoting domestic violence.

(2) It is cheesy. Yes, it takes plastic, shiny cheesiness to a whole new level. It's a work of haute fromage.

(3) The acting is wooden. No, the acting is excellent. It's merely that the characters are two-dimensional. This is deliberate. However they remain exciting and watchable as they enthusiastically embrace their roles in the quest for citizenship.

rob stirling
5つ星のうち5.0 One very good, one less so.
2020年10月29日に英国でレビュー済み
Amazonで購入
A 2 disc box set (not 1 as advertised) consisting of the first and second films in the Starship Troopers franchise.
Both come with English subtitles for the hearing impaired and extensive bonus features.
Paul Verhoeven's blockbuster didn't go down too well initially with the critics but like a few in that rare breed of cult films it has subsequently been recognized as something special in the action/sci-fi/horror genre. I watched the film in France originally in a language that I didn't fully understand and liked the special effects, the action and some of the clear references to consumerism ---- my French companions loved it because they could appreciate it's subtle references, back in 1997 in a French cinema.

Having since watched it on dvd with full blown English I can see all the references to globalization and fascism and it has the Dutch director's trademark vision as also seen in 'Robocop'. But forget all that, it's a visual epic that's full of technical wizardry and bone-crunching action that is just as entertaining with Verhoeven's jaundiced and probing filming technique and it is glossily brutal with some of the scenes extremely violent.

'Starship Troopers 2 : Hero of the Federation' was made six years later, directed by Phil Tippett who won an Oscar for his visual effects for Jurassic Park, and is a good companion though in my view not as entertaining as the original. Cant knock it as it has its merits. It by no means reduces the entertainment value of this box set which is really cheap and cheerful at present. Well worth a shot.
続きを読む
3人のお客様がこれが役に立ったと考えています
違反を報告
レビュー を日本語に翻訳する

Jay
5つ星のうち5.0 Dont purchase for blu ray reason only
2017年8月3日に英国でレビュー済み
Amazonで購入
I hope this will save some people some cash. I have this on dvd but cos love the film and wanted blu ray version. Don't bother, as a blu ray fan I can tell you, there is no difference between dvd and uprated on blu ray player to playing this blu ray direct- none. Sold my copy. I give 5 stars because for me the special affects were ahead of their time. Have to admit, this is first time I watched thinking 'hmm looks a little tired and dated'.
続きを読む
14人のお客様がこれが役に立ったと考えています
違反を報告
レビュー を日本語に翻訳する

Tom
5つ星のうち3.0 Great movie; Weak extra features.
2017年9月1日に英国でレビュー済み
Amazonで購入
As a fan of the movie and after reading the Blu-Ray.com review of it, I hit Buy. Unfortunately, I'd forgotten to check if the apparently amazing extra features made it onto the UK release.

It looks like the US is getting an Anniversary edition of it shortly, including 4K transfer. I wish I'd waited to see if it'll make it back over here. When they have access to a rich vein of feature material, including two good commentary tracks, it seems lazy to not put them on there.

I'm pondering whether to send it back to Amazon, but it's not their fault I guess. Hngh.
続きを読む
6人のお客様がこれが役に立ったと考えています
違反を報告
レビュー を日本語に翻訳する

Filthy Raider
5つ星のうち5.0 Not Just A Bug Hunt - BLU RAY
2014年8月14日に英国でレビュー済み
Amazonで購入
Never has a film been made that is so tongue in cheek all the way, and with such violent and exciting action scenes and gory deaths that you keep coming back to it. It has elements of Aliens but Verhoeven shows you a world not far removed from a future started in his RoboCop and just after Total Recall. It's hinted that a group of army leaders have taken over the world and created what they think is a Utopian Society where to be anything in life (even having babies) means you have to join the military and do service. And as military leaders are apt to do, with no one left to fight on Earth, they start a war against a load of bugs across the galaxy.

This, though, is the backstory to Carmen, Rico and Dizzy's love triangle that throws them all into the mix in the fight against the bugs. Drag in the never dull Jake Busey and you have a real roller coaster that showed early CGI should not be ignored, but when used properly creates a truly fantastic backdrop.

Two scenes I immediately checked on Blu Ray. Rico's solo fight against one of the big bugs and the scenes in space when the ships are attacked. Quality in sound and vision is fantastic, well worth trading up your DVD.

As well as the gore and violence there is some nudity but it is worth remembering that when Verhoeven got his young cast to film the shower scene, he stripped off as well to show them not to be embarrassed. Sad that most of the main cast never really got a kick start with this, but some people will love it and others hate it.