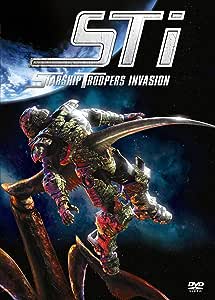 FallenGrace
5つ星のうち2.0 Some decent action but an otherwise disappointing experience.
2014年12月18日に英国でレビュー済み
Amazonで購入
Starship Troopers: Invasion is the fourth movie in the Trooper franchise and the first to be animated just using CGI. I'm a huge fan of the first film and have been nothing but disappointed since and sadly Invasion just continues that trend.

First and formost are the strange changes they made, Carman, Rico and Carl all make appearances but none of them are anything like they should be in either appearance (Carl now has black hair...) or personalities with once again Carl having the biggest change having been made into a complete tool. The troopers armour has also been completely overhauled so they look more like mechsuits which took away quite a lot of the iconic Trooper image which also bothered me a lot, it's either based on the Roughneck TV show armour or as Invasion was made by a Japanese animation studio Stage 6 could reflect that.

The actual story is passable but the way it gets there has quite a few plot holes, bad dialogue and has quite a lot of cringeworthy moments. I mean at one point one of the Troopers takes on a bug using martial arts, it was just painful to watch. This is also the type of film where all three of the main female protagonists were naked within 30 minutes for almost no reason, ridiculous.

This isn't a deep movie either, none of the tongue and cheek satire is there, just all out action and explosions. Some of it is rather exciting to watch though with bullets, bugs, gore, spaceships and explosions all around.

Visually Invasion is a mixed bag. The mechanical side of things it's spot on, the ships, guns and suits all look great. The characters though are another matter, lip syncing is way off as it was obviously made to a Japanese dub and never reanimated for an English voice over. The whole film also has a grainy effect and the colours seem really muted for a lot of it but overall the graphics are of very good quality.

The music has some nice tracks that go with the over the top action, some of which are remixed versions from the original Starship Troopers soundtrack. The voice acting in English however is another matter, feels almost like a dubbed Bruce Lee movie from the 70's.

Overall as a one off watch Invasion was fairly mindless entertainment but it doesn't really add anything to the Starship Trooper universe and they made some bizarre choices I couldn't get over. If you can put that aside, deal with the awkward moments and want some fodder for the brain then give it a go. If not rewatch the original Starship Troopers, even after 16 years it's a brilliant film.

+ Visuals are decent.
+ Action is good.

Elfshopper197
5つ星のうち5.0 Animated action with nudity and colourful language.
2018年3月28日に英国でレビュー済み
Amazonで購入
I thought this movie was pretty cool but it has a theme of violence. Although it is completely computer-generated there is male and female nudity within. The language is rough and there is plenty of action throughout. This movie is about fighting off an invasion of alien bugs and it is set in a fictional future. It follows on from the second movie in the franchise and could be seen in conjunction with the animated shows. I would recommend this video to fifteen to eighteen year-olds and over. The main menu is easy to use and there are special features.
続きを読む
違反を報告
レビュー を日本語に翻訳する

NickB
5つ星のうち5.0 Would you like to know more?
2017年6月17日に英国でレビュー済み
Amazonで購入
This is great - well it's rubbish really - but it's that great 'engage brain neutral, grab crisp bag, sit back and relax, don't take it seriously, strewth, this is fun' type of rubbish. I loved the original Starship Troopers, (cringed my way through the next two that seemed to completely miss the point that the original was a satire of right wing extremism) and loved this one. The CGI is excellent, the story works well and frankly the acting is better than the two human led sequels. This feels like the logical sequel to the original film. Some nudety and lots of violence so probobly safest to watch it before you let your kids see it. Would you like to know more?
続きを読む
1人のお客様がこれが役に立ったと考えています
違反を報告
レビュー を日本語に翻訳する

Go in not expecting too much and you will probably enjoy.
My copy will do the rounds of my brothers and pub buddies.