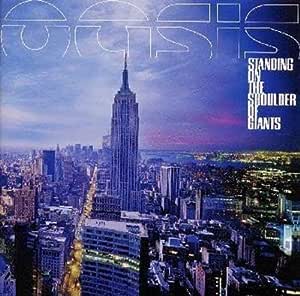 1. FUCKIN’ IN THE BUSHES

Hans Jørgen Jakobsen
5つ星のうち5.0 Ecellent music. One of the better ones from Oasis
2013年1月18日に英国でレビュー済み
Amazonで購入
Music for listening and relaxing. Go and buy it on vinyl, then you get the whole package. Excellent picture on the outside cover.
続きを読む
役に立った
フィードバックを送信中...
フィードバックをお寄せいただきありがとうございます。
申し訳ありませんが、お客様の投票の記録に失敗しました。もう一度試してください。
違反を報告
レビュー を日本語に翻訳する

Michael Herlihy
5つ星のうち5.0 Excellent and unfairly maligned album
2019年12月24日にアメリカ合衆国でレビュー済み
Amazonで購入
As a latecomer to the Oasis debate, I would place this just below the first two albums. The lyrics are somber and sometimes defensive, which is understandable following the critical trashing of Be Here Now, but they contain an emotional honesty that reminds me of John Lennon's first solo album. The music is haunting in a way that is just as moving as the ebullient tones of Definitely Maybe and What's the Story. Go Let It Out is as good a single as they've done, although my favorites are Who Feels Love, Gas Panic, and Roll It Over.
For those expecting a repeat of the Brtipop glory days, the album will not answer the mail. However, if you want a mature record with melody, great vocals, and lyrics expressing the letdown of fame and celebrity, this is the choice.
The critics missed the boat on this one.
続きを読む
1人のお客様がこれが役に立ったと考えています
役に立った
フィードバックを送信中...
フィードバックをお寄せいただきありがとうございます。
申し訳ありませんが、お客様の投票の記録に失敗しました。もう一度試してください。
違反を報告
レビュー を日本語に翻訳する

Mark
5つ星のうち5.0 Overlooked, Underrated
2013年3月18日にアメリカ合衆国でレビュー済み
Amazonで購入
I have developed into a massive Oasis fan over the years. How this album is their lowest selling album to date I don't completely understand though much of this is due in my opinion to the Be Here Now backlash and in the US many casual fans just moved on from Oasis. Also if I recall a major music publication put this on their "worst of the year" list which doesn't usually help with album sales. Also Noel has not spoken very positvely about the album slating most of the tracks save FITB, GLIO and Gas Panic, possibly due to the lower sales and also maybe because he was dealing with a lot of issues at the time. I'm really not sure but I know for a fact that Oasis have not performed any of the album tracks save FITB(if that counts) live since 2002-03. Also Noel has not performed any of the tracks solo/flying birds live so he isn't/hasn't exactly promoted the album which can not help sales. Even Be Here Now which Noel has been openly critical about has recieved more live play in the past six/seven years with Don't Go Away(Noel Solo) and the reworked version of My Big Mouth that the band played in it's final 08-09 tour. I've wondered if Noel likes Giants even less than BHN. Back to the album, this is one of my favorites right behind Be Here Now and Morning Glory and right up there with Def. Maybe and The Masterplan. What do I love about this album? I love the psychadelic elements and the lyrical content which is heavier than most Oasis releases. Also most of the songs are great though I will not say all of them. I don't really care for PYMWYMI or Little James but like or love all the other tracks. The opening instrumental is pretty good though not one of my favorites. Go Let it Out was def. my favorite tune at first and I still rank it highly. Who Feels Love was a grower for me. I basically tolerated it at first but it has now become one of my favorite tracks. I love the vibe, production and the possitive lyrical content. Gas Panic has to be my favorite tune on the album now. I think this was Noel's version of Cold Turkey and his dealing with cocaine and to benzodiazepines that he had been using to get through the cocaine withdrawl. I love the opening, the guitar solo and the lyrics. IMO it is one of LIam's better studio efforts. The next two songs feature Noel as lead VOX. Initially Sunday Morning Call appealed to me more but with repeated listenings I have come to appreciate WDIAGW much more. Next up is I Can See A Liar which is generally frowned upon by both casual and die hard fans. However I like the tune and the energy shift that it brings to this album though many disagree completely with this sentiment. No the lyrics aren't great but neither are many of their more popular songs which arguably don't have great lyrics either so I think that is a mute point. Roll it Over closes out the album perfectly though I don't rank it as highly as many Oasis diehards do. My only complaints about the album and they are minor is that it is a fairly short album probably at least partially attributed to BHN backlash and that the weakest tracks are in the middle of the album. I would recommend this to anyone especially to those who may have "heard" this was a bad album, to those concerned about it not selling well for Oasis standards and to those who listen to Noel speak about the album in negative terms.
続きを読む
6人のお客様がこれが役に立ったと考えています
役に立った
フィードバックを送信中...
フィードバックをお寄せいただきありがとうございます。
申し訳ありませんが、お客様の投票の記録に失敗しました。もう一度試してください。
違反を報告
レビュー を日本語に翻訳する

JSB
5つ星のうち4.0 Don't Believe The Track Listing
2014年11月10日にアメリカ合衆国でレビュー済み
Amazonで購入
Solid Oasis album - the other reviewers have details as to the substance covered. This review is to correct Amazon's description of the item.

The track listing describes two disks, including a two-track bonus disk with the song "Let's All Make Believe," which was criminally omitted from the album. Since I was extremely interested in getting my hands on that tune, I gave Amazon a Sunday Morning Call to verify that the listing was correct. I was assured, quite politely and enthusiastically that it was (Who Feels Love?)!

I got the album a few days later, took it out of the packaging, Rolled It Over, and discovered that there was only ONE disk, inducing Gas Panic! But I was assumed before purchase that "Let's All Make Believe" would be included! Where Did It All Go Wrong?

I called back Amazon and complained that despite the assurances I received and the product track listing, there was only one disc for this item. To Amazons credit, it Put Its Money Where Its Mouth Is and gave me a refund. The rep I spoke with said that Amazon would promptly update the track listing, but to date it has not been done. I Can See a Liar!

So, if you are looking to buy this item with the hopes that "Let's All Make Believe" will be included, go buy the "Go Let It Out" single instead, where it is a b-side.
続きを読む
9人のお客様がこれが役に立ったと考えています
役に立った
フィードバックを送信中...
フィードバックをお寄せいただきありがとうございます。
申し訳ありませんが、お客様の投票の記録に失敗しました。もう一度試してください。
違反を報告
レビュー を日本語に翻訳する