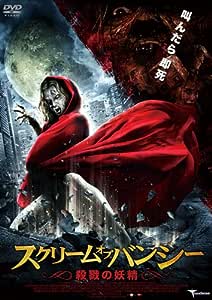 Quetzalcoatl78
5つ星のうち2.0 Ok film I couldn't hear!!!
2012年8月8日に英国でレビュー済み
Amazonで購入
SCREAM OF THE BANSHEE starts really well; some university archeologists cataloguing stuff are sent a mysterious old metallic box, which when opened, contains the decapitated head of a banshee. The banshee head screams, causing ears to pop and bleed, and then the film descends into the usual supernatural-movie fluff.

People have hallucinations and dreams of the Banshee, a demon woman from Irish mythology, scaring or injuring them in nasty ways, and for a while it looks like it's going down the NIGHTMARE ON ELM STREET route.

The archeologists are eventually led to Lance Henrikson, who has studied the Banshee all his life, and now gone a bit potty. There are some mumbly explanations of things, then a RAIDERS OF THE LOST ARK-style moment at the end.

The first 25 minutes are great, the rest seems a bit muddled and lacking much originality, but is interesting and I reasonably enjoyed it. Despite the bad reviews of the effects here, I quite liked them, and thought the Banshee herself was pretty good in a 1980's sort of way.

I entirely agree though, with another review on here concerning the sound of the film; its terrible. My enjoyment of the film was severely hampered by clutching the remote control and constantly fiddling with the volume. The dramatic parts are so ear-poppingly loud I'm not surprised bleeding ears was a recurrent theme throughout the film. And yet much of the dialogue is so quiet that it's impossible to hear, and I had to turn the volume up so much that when a dramatic 'loud' bit came on, it was so magnificently thunderous in volume that I was sure my telly would blow up. Highly irritating sound mix, and Lance Henrikson in particular was very very mumbly. I admit to being a tiny bit hard of hearing, but a film with such a terrible sound mix as this is highly irritating. Subtitles would have helped enormously, and, I would have given this film an extra star if I had been able to hear the damn thing, without getting a Noise Abatement Order.

Ozzieal
5つ星のうち2.0 Ordinary
2015年4月18日に英国でレビュー済み
Amazonで購入
I have quite enjoyed some of the After Dark Originals series but Scream of the Banshee was a letdown. Dull story, questionable acting and unconvincing special effects. The biggest problem with the story was that the banshee was a bit aimless. It showed up at predictable times and didn't menace anyone other than the main characters. I was expecting it to be a threat to the world but I guess budget restrictions reduced the number of extras that could be hired and despatched. I bought this on blu-ray and that was also a disappointment with some very washed out colours and at times very heavy on the video noise. Sound however was good.
続きを読む
1人のお客様がこれが役に立ったと考えています
役に立った
フィードバックを送信中...
フィードバックをお寄せいただきありがとうございます。
申し訳ありませんが、お客様の投票の記録に失敗しました。もう一度試してください。
違反を報告
レビュー を日本語に翻訳する

Jaye Morgan
5つ星のうち5.0 Worth Watching
2018年4月11日に英国でレビュー済み
Amazonで購入
This is an odd film. I'd recommend it, though be aware that it has one of the many soundtracks where the incidental music blasts you after you've turned up the volume to hear the dialogue. It's a bit of a mix of a movie, but I enjoyed it.
続きを読む
役に立った
フィードバックを送信中...
フィードバックをお寄せいただきありがとうございます。
申し訳ありませんが、お客様の投票の記録に失敗しました。もう一度試してください。
違反を報告
レビュー を日本語に翻訳する

Ronnie wendt
5つ星のうち4.0 Scary Story
2011年10月10日に英国でレビュー済み
Amazonで購入
Not a bad Horror movie
in fact , good story and scary this old scary women from the past
happy to buy it ......
One for my Horror collection