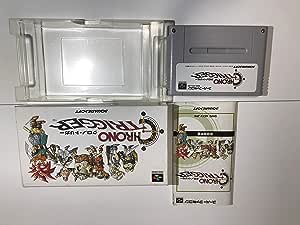 8-BIT Rockman
5つ星のうち5.0 The RPG in history and stands the test of time itself!
2012年8月11日にアメリカ合衆国でレビュー済み
Amazonで購入
To not give this perfection a 5 star rating would be wrong. Everything about this game is absolutely perfect. The story, the characters, the music, the graphics, the gameplay, and everything is just absolutely perfect!

The game starts with Crono and his friend Lucca going to the Leene Square for the fair in the year 1000 AD. Crono meets a character named Marle and begins the story. When Crono introduces Marle to Lucca, Lucca shows the telepod which transports people from one pod to the next. Marle enters the telepod and due to the magical pendant she is wearing, she gets sucked through time into the year 600 AD. The hero Crono sets forth to go after her and find her while Lucca stays behind to find out what time they went to. This sets the time traveling into motion and starts the events that unravel the rest of the game such as discovering the terrifying truth of how the world ended. Later through the game, you learn of the evil magician by the name of Magus that ruled the mystics in the year 600 AD where an ally with a troubled past has a score to settle with Magus. This whole game continues to unravel and surprise every minute of Chrono Trigger which is what makes this truly an epic of the ages RPG to be enjoyed for the of time!

Being a game about time travel, naturally, what you do in the past affects the future. For example, opening a chest in the year 600 AD will make that same chest location in the year 1000 AD be empty. However, you open the chest in 1000 AD and return to 600 AD to discover the same chest where you will find the same, if not better item. This will be very useful to know when you play through the Tyran Castle and making sure NOT to open any chests as they will have superior items in the future. The battle system is genius. It is turn based with timers for waiting before you are allowed to attack. Back then, that was new. There appears to be no limit to how many items you can have as far as positions go like in Pokemon. Your items do peak at 99 though.

The graphics are superb! The characters were drawn by famous Akira Toriyama (Dragon Ball Z), having that be said, you will look at Crono and compare him to Goku, similarly, Marle with Bulma. The animations, drawings, effects, special moves, and scenery are so absolutely well done, it is unbelievable. For a Super Nintendo game, this is lifelike!

The music is a perfect 10/10 score! Yasunori Matsuda composed this game's soundtrack and with every song matching so well with the environment, it is a thrill to play even if you just want to listen to the soundtrack.

The controls are all where they should be AND you can modify them per file. In this game, you get 3 save files. After you complete everything in the game (I really think it is only the Black Dream being the key thing), you get New Game + which allows you to use another file's status including level, money, items, armory, and everything else you had into a new game which again, for the time, was new. The menus are all easy to navigate. You are also given the option to change the battle system between WAIT and ACTIVE any time you are not in a battle already.

For those who need to know, this game is written 100% in Japanese. It is in Katakana with the exception of certain file names, magic attributes, Magus's name, and a few locations being written in Kanji. Being a Japanese game, Chinese speakers can get through this game. Any American player stands a really good chance at getting through this game. Chrono Trigger is pretty easy as long as you battle everything in your way at least 1 time, you will be the proper level. You never have to stand in one place to level up like in other games. Also, when you get more than 3 characters, the characters you do not use level up too, however, they will not learn dual/triple tech moves unless they are in battle at least one time with their pair character and have met the tech points (level system for magic) requirement.

The bottom line, if you do not play this game, you are missing out, BIG TIME. Dig out that old Super Nintendo / Super Famicom and grab this game while you can!
続きを読む

Levi
5つ星のうち4.0 Satisfied!
2013年4月4日にアメリカ合衆国でレビュー済み
Amazonで購入
I'm a collector of FF games, and I thought I would add all Chrono Triggers to my collection. I am very satisfied with this game, albeit I expected the box to be wrapped in plastic, but it wasn't. Overall, I'm satisfied.
It arrived very quickly to be an import. Actually, quicker than some of the games I ordered from America.
続きを読む
1人のお客様がこれが役に立ったと考えています
役に立った
フィードバックを送信中...
フィードバックをお寄せいただきありがとうございます。
申し訳ありませんが、お客様の投票の記録に失敗しました。もう一度試してください。
違反を報告
レビュー を日本語に翻訳する
その他の国際レビューを読み込む

Geo
5つ星のうち2.0 Not Quite What I Expected...
2016年2月4日にアメリカ合衆国でレビュー済み
Amazonで購入
This was a Christmas gift for my adult kiddos. Item wasn't for Super Nintendo here in US, it is the Japanese version of Super Nintendo (Famicom). Had this been the US version game I would have been a throwback hero.
続きを読む
1人のお客様がこれが役に立ったと考えています
役に立った
フィードバックを送信中...
フィードバックをお寄せいただきありがとうございます。
申し訳ありませんが、お客様の投票の記録に失敗しました。もう一度試してください。
違反を報告
レビュー を日本語に翻訳する