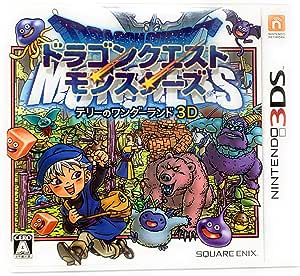 An amazing Dragon Quest Monster game, but it's a shame it hasn't been ported.
Terry's Wonderland is an old DQM game from ages ago, but was finally updated to 3DS in Japan without mention of localisation for years. I doubt localisation will occur for it since DQMJ and DQMJ2 didn't receive too well, among other issues, so this may be your only chance.

I'll break down this review into the basic components:

GAMEPLAY:
If you've played Dragon Quest Monster before, this game is basically that, with balance changes and more spell sets added to monsters. DQMTW is a turn-based game, similar to Pokemon in the sense that you encounter battles, but in DQMTW you touch the enemies and it will initiate the battle. To capture enemies, you must utilise the 'Scout' system which pits your Monster's Attack values against the enemies' Defence value, and gives you a percentage chance of capture.
You can synthesise 2 monsters together to make another, more powerful one. The gameplay offers full control of the monsters attacks by ordering them; fans of Final Fantasy will recognise the battle technique easily. Overall gameplay is solid - it has almost no significant faults and is easy to get used to.
5/5 for solidity and ease of access, but offering complex control if needed.

GRAPHICS:
The game is stylised, similar to other J-manga/anime style games. The fps rarely drops, but some times does in "Horde" levels, where tons of enemies chase you. The 3D works fine, with nothing else to say really. A solid-looking game, especially for a portable system, but don't expect hyper-realism - it just looks like a solid Dragon Quest game.
4/5 for being limited by only the 3DS hardware.

SOUND:
Composer Koichi Sugiyama has produced music for nearly all the previous Dragon Quest titles. There is nothing else to say other than that it as perfect as ever.
5/5 for amazing soundtrack - the OST is on Youtube if you wish to listen.

LANGUAGE:
Being a Japan Import, this game is in full Japanese. It has various Kanji characters in it, so for fluent understand, you must be fluent in Japanese. Knowing Hiragana and Katakana as well as general phrases (like me) was enough to get through without needing a guide - albeit there are NO full guides to this game in English online. Your best bet is to find a Japanese guide and translate the page.

Due to not being fluent, I missed out on some of the story, and didn't catch all that was happening, but it is easy to follow.
3/5 for lack of understanding, but this is to be expected from a Kanji-heavy import game. If you are okay with missing some of the story, possibly missing a lot of information, and needing a guide to proceed, then it is definitely a 5/5 as the language barrier will not impede.

Overall? 5/5. The above points illustrate that this is a solid game; shown by how Square Enix sold through 93.96% of their stock of the game in its first week of release.
Dragon Quest Monster fan? Get it.
Dragon Quest fan? Get it.

Deramin
5つ星のうち1.0 This game is region locked.
2018年10月3日にカナダでレビュー済み
Amazonで購入
Do not buy this game unless you own a 3ds from correct region. will not work with North American 3DS.
Very disappointing Nintendo is still doing this.. just blew my money on nothing.
続きを読む
役に立った
フィードバックを送信中...
フィードバックをお寄せいただきありがとうございます。
申し訳ありませんが、お客様の投票の記録に失敗しました。もう一度試してください。
違反を報告
レビュー を日本語に翻訳する