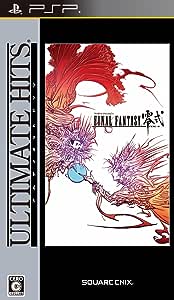 Amy
5つ星のうち5.0 Difficult, But Fun!
2015年3月3日にアメリカ合衆国でレビュー済み
エディション: 廉価版Amazonで購入
I waited for what seemed like a month and half century for this to come, and so far, it was worth the wait! I don't understand a bit of Japanese, but it is fun just to figure out how to play the game. Its more than just press X, there are combo attacks that I haven't quite figured all of them out yet. An awesome part of the game is where you get to play as the summon Odin!
I do think it stinks that Type 0 wasn't translated in English for the PSP. I realize it has been released for the PS4 in English, but I at least wish there was an English sub option. Its a fun game, but if there are people like me, who does not have a PS4, I really can't even afford a PS3, but still love their PSP, and want to play this game but can't read Japanese to save their life, it could be tough. I have heard that there is an English fan-sub that people have and can download, but I don't know how to even do that; and if there are others who also don't know how to do that, and can't read Japanese, it could be more difficult. I at least figured out which words were: save, yes, and no. Other than that, I have yet to figure out which words are potion, status, optimize, equip, etc.
続きを読む
1人のお客様がこれが役に立ったと考えています
役に立った
フィードバックを送信中...
フィードバックをお寄せいただきありがとうございます。
申し訳ありませんが、お客様の投票の記録に失敗しました。もう一度試してください。
違反を報告
レビュー を日本語に翻訳する